There are certain elements of science fiction that can make a movie or TV show memorable for the masses. A cool ship, a kick-ass weapon, or an awesome robot. The right human made mechanical being can make a movie or a show a hit and the robot a pop culture icon. So without further ado, here is my picks for the 12 best robots. 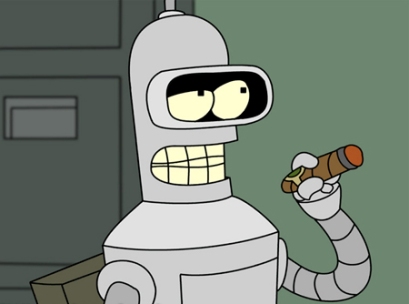 12. Bender (Futurama): Many times in science fiction, robots tend to be philosophical and intelligent,this makes the resident foul-mouthed, alcoholic of Planet Express so refreshing. Built in Tijuana, Mexico, Bender serves equally as a companion and a pain to Fry, Leela and the rest of the characters on Futurama. His crass and unapologetic humor has made him the most popular character on this long-running cult favorite series. 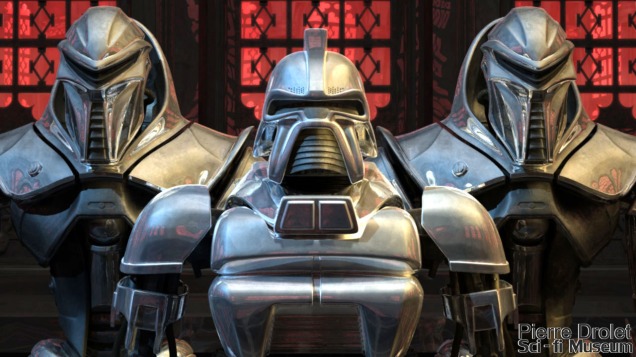 11. Cylons (Battlestar Galactica): Whether they look like the large toasters of the original series or the stunning Tricia Helfer in the revived series, the metal baddies of Battlestar Galactica kick-ass. Even with the cheap production qualities the series used to have, the look of the Cylons was so original that people instantly took to them, and even those who had never even heard of the show recognized the thin visor with the red light dancing across it. When the series was revived 2003 with a completely different spin on everything, a new breed of Cylon was needed, and they gained the ability to blend in with humans making them that much more fascinating. 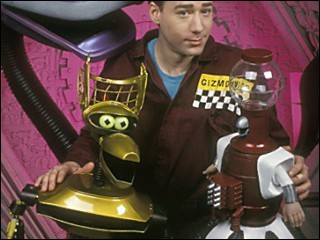 10. Crow & Tom Servo (Mystery Science Theater 3000): As I am sure many of you know, being stuck in a terrible movie is made bearable when you can hurl insults at the drivel onscreen. But let us not forget that two thirds of the trio who created the art of “riffing” a movie were mechanical. More recognizable in silhouette form, Crow and Tom Servo served valiantly under Joel Hodges and Mike Nelson, watching the worst films in cinematic history and letting people know what they thought of them. Despite the fact that the show has been off the air for years, Crow and Servo still carry a large and loyal fanbase, and with the power of crowdfunding those fans have now ensured that the two ‘bots will get another trip on the Satellite of Love. 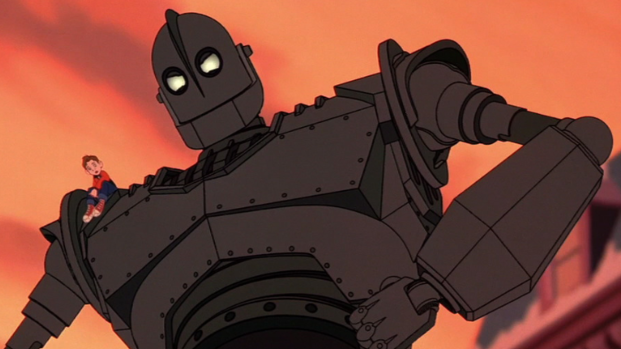 9. Iron Giant (the Iron Giant): Brad Bird may be revered in the world of animation now, but his first step into the big leagues was introducing audiences to a larger than life robot who only wanted peace during a time of tension. Serving as a wish fulfillment to young boys everywhere, the Iron Giant for whom this film is named for only wants to pal around with his pal, Hogarth, reading comic books and eating metal. The problem is that he was designed to be a weapon and with the human race in the hottest part of the Cold War he is immediately seen as a threat. Not only does the Iron Giant feature a cool retro design fitting of the era, but he also carries a message of peace which still resonates today. 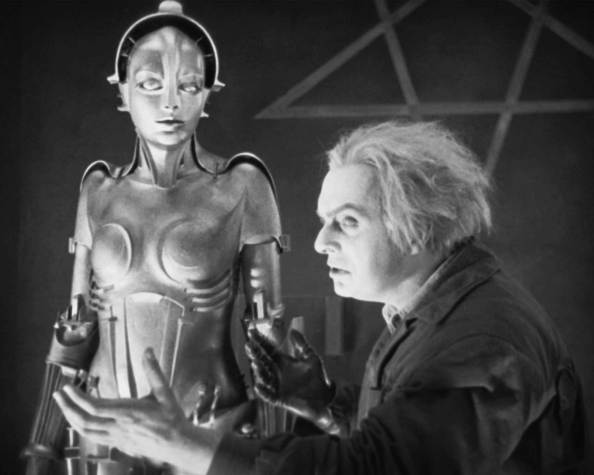 8. Maria (Metropolis): Arguably the most influential robot in cinematic history came from silent science fiction classic, Metropolis. Her sleek art deco design fit perfectly with the visual aesthetics of the picture. Suffering for her art, Brigitte Helm was forced to stand for hours as designer Walter Schulze-Mittendorf cast a mold in “plastic wood” in order to sculpt this magnificent android. Maria’s influence can be seen in everything from; C-3PO to Queen’s Radio Ga-Ga. 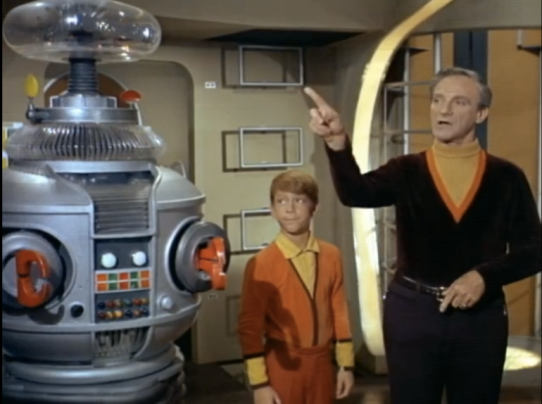 7. Robot (Lost in Space): What kid does not want to have a robot to hang around with while growing up? Being lost in the furthest reaches of space was made a little bit better for Will Robinson having Robot around. Not only did this machine friend have a memorable catchphrase, but he also ensured that the family was protected from the treacherous Dr. Smith with his weekly schemes. With the boom of genre shows in the 1960’s, Robot helped Lost in Space stand out from the rest, serving as the most iconic character on the show. 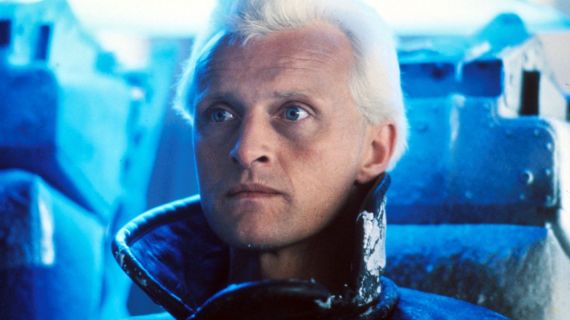 6. Roy Batty (Blade Runner): He has seen things you wouldn’t believe, and that’s what makes this Replicant, from one of the most revolutionary science fiction films of all time so memorable. Though he was ruthless, Batty had a certain philosophical approach to dealing with his newly developing emotions. His poignant final monologue he has in his final moments ranks among the best lines in movie history. 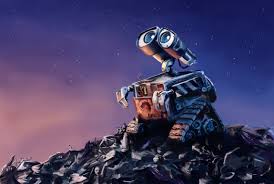 5. WALL-E (WALL-E): In 2008 we saw one of the rare instances when an animated feature made it onto just about every prestigious list of best films of the year. The little trash collecting robot of the film WALL-E had established an emotional connection with audiences all over with his charm and humanity. Trapped on a desolate world, this little robot was forced to clean up humanity’s mess while everyone else lounged around on a space cruise. But falling in love, forced the unassuming WALL-E to have the adventure of a lifetime and save the human race in the process.But at the end of the day all WALL-E wants to do is enjoy Hello Dolly with EVE. 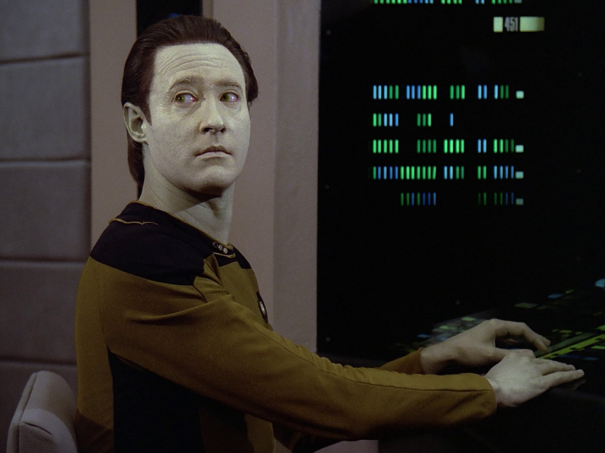 4. Data (Star Trek: The Next Generation): Gene Rodenberry’s classic science fiction franchise stated that space is the final frontier, but it was not exclusively for humans. Aboard all of the Federation ships we saw in the various Star Trek shows and films, were various; Vulcans, Changleings, Bajorans, and in the case of Star Trek: the Next Generation, an android who was fascinated by humanity. Beautifully portrayed by Brent Spiner, Data’s attempts to relate to the other crewmembers led to many memorable moments in the series. Over the course of seven seasons and four films, this android endeared himself to fans like few fictiona; characters have before easily earning him a spot (no pun intended) on this list. 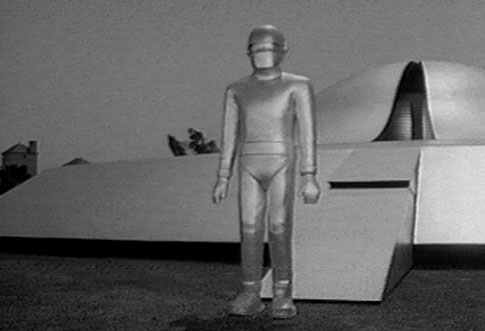 3. Gort (The Day the Earth Stood Still): Arguably the most socially relevant science fiction film of all time, the Day the Earth Stood Still, features an alien who lands in the middle of Washington DC not to conquer humanity, but to save it. During his time on earth, Klaatu realizes that tragically humanity responds most to threats of violence, so to back him up he has the giant indestructible robot Gort. Despite his incredible strength and power, Gort can only do ask his master commands. Eschewing the busy design of many of the other robots of Cold Era science fiction, Gort was visually sleek and streamlined which helped in stand out to audiences and still makes him one of the best robots of all time. 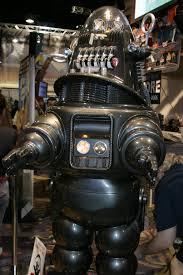 2. Robby the Robot (Forbidden Planet): If one film is the epitome of classic science fiction it is the 1956 classic, Forbidden Planet. All of the hallmarks of the era are present; flying saucers, a space monster, eye-popping technicolor, incredible visuals, and a cool robot. Built by Dr. Morbius during his seclusion, Robby is a machine seemingly capable of doing anything; from lifting construction equipment to making whiskey. Robby the Robot proved so popular that he has appeared in a host of other films and TV shows which followed, with his complex design and amiable personality making him a staple of science fiction. 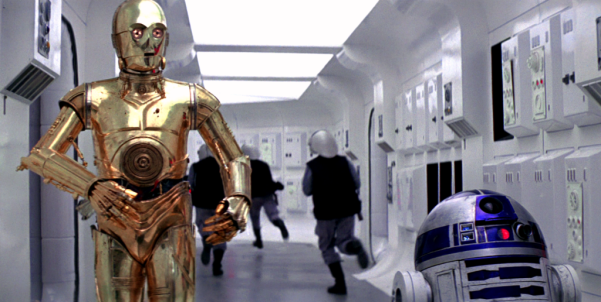 1. C-3PO and R2-D2 (Star Wars): The Star Wars saga has been one of the most popular film franchises for decades now, and the first two characters to be introduced to fans when it all started were two droids on a Rebel blockade runner. Fromfun of the original trilogy, to the dredges of the prequel films, to the hopefulness of the Force Awakens; these two droids have been a constant throughout the saga.In fact the entire Stars Wars series was launched because these two were able to get the Death Star plans away from the Empire and into the hands of Luke Skywalker kickstarting the whole thing. Despite the rumors that the actors who portrayed these two do not get along in real life, as far as film fans are concerned C-3PO and R2-D2 are inseparable.