Disney Rides That Should be Movies

Ever since Pirates of the Caribbean was a success in 2003, Disney has been turning to the famed rides at their theme parks for movie inspiration (read my thoughts on that HERE). In fact when Walt began work on Disneyland five decades ago he employed the top people from his film productions to lead the way as the precursors to what we now call Imagineers. When Michael Eisner took over as Disney CEO in the 80’s he sought to build on that and provide cinematic experiences for guests at the park. So from Anaheim to Tokyo to Orlando and everywhere else there are storied attractions which would lend themselves perfectly to the silver screen. Here are the rides I think would work the best.

Big Thunder Mountain: Just a few short years ago, Disney was starting pre-production on a Western TV series based on their famed Big Thunder Mountain roller coaster. This family coaster is arguably the most immersive of its kind, even the queue before boarding the ride makes riders feel like they are in a settlement in the Old West. Once it takes off this thrilling ride takes you flying through a canyon as you see; settlements, mines, and even dinosaur fossils. It has been a very long time since moviegoers have had a Western which was fun, which is what movie based on Big Thunder Mountain has the potential to be. Set this fun adventure in a frontier town with a railroad running through it, and the potential is there to go in any number of directions. 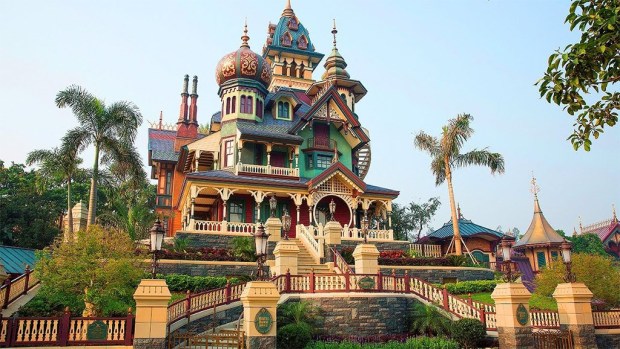 Mystic Manor: Based in Disney’s newest park in Hong Kong, Mystic Manor has been met with rave reviews from nearly everyone who has been on this trackless ride. Inspired by the Disney Parks group known as the Society of Explorers and Adventurers (S.E.A) riders enter the mansion of Lord Henry Mystic and see his collection of mystical artifacts from his adventures around the world. This mansion is also home to Albert, a monkey who ensures your trip to Mystic Manor goes crazy. In the last poll I conducted 99 out of 100 people dig monkey sidekicks (the one is probably a loser) in their movies. Imagine a film following Sir Henry Mystic as he travels the world with Albert adding artifacts to his famed collection. Considering the ride boasts a score from Danny Elfman, you do not need to find new music for a flick.

Expedition Everest: As you pass through the queue of this Animal Kingdom roller coaster, you will see a collection of artifacts relating to the legendary cryptozoological creature, the Yeti. Once you board the coaster, you gently ride through the Himalayas, until you find the tracks ahead of you have been destroyed by the mysterious beast. From there you fly at 50 mph backwards and forwards through caves and valleys before finally confronting an enormous Yeti bathed in ominous strobe lights. Veteran Imagineer Joe Rohde has mined centuries of lore and legends about this cryptid and distilled it into a single memorable ride with a cohesive narrative. The fact that this E-ticket attraction has yet to inspire someone at Disney’s film division baffles me a little. You already have a plotline of intrepid explorers confronting a legendary cryptid, all you would have to do is build on that and you have a hit on your hands.

Haunted Mansion: You may be saying right now, “hey you dunderhead, this was already made into a movie. You even wrote about it in the previous article linked in the intro!” And you have a point, but as I have previously written I LOVE the Haunted Mansion. It is my favorite theme park ride of all time. As such I believe this famed attraction deserves a GOOD movie adaptation. People love haunted houses and the most popular one in any theme park, has 999 ghosts haunting it(but there’s always room for one more). A few years ago Guillmero del Toro was brought onboard to bring his vision to the project, and even stated his take would center around the fan favorite Hatbox Ghost. But sadly nothing new has popped up on this front in a very long while.

← Movie Review: ‘The Predator’ (Second Opinion)
The Biggest Reason Not to Use Kickstarter →

One thought on “Disney Rides That Should be Movies”