Plot: When the ‘Sugar Rush’ console is broken and unplugged, Ralph and Vanellope venture into the internet to buy a replacement part from eBay. As they face more and more obstacles they begin causing havoc on a global scale.

Review: Man, we loved Wreck-It Ralph when it landed. It was charming, bright, funny and a real love letter to classic gaming. This sequel – the first animated sequel with a theatrical release by Disney since 1990 – changes the scope from a dusty old arcade to the biggest landscape in all human history. This concept for a sequel, which we suggested as something we’d like to see years ago, could have been horribly cringe-inducing. Whenever children’s entertainment tries to include anything related to the internet it reads as misinformed, scaremongering or pandering.

Ralph Breaks the Internet is refreshingly none of these things. The people responsible for writing and designing the visual representation of the internet not only know the ins and outs of internet culture but seem to have a genuine love for it. It’s clear that they participate in and enjoy everything the online world has to offer. The attention to detail the familiarity of the world adds to the film’s effectiveness. Like the original this film is deeply heartfelt with the journey of Ralph and Vanellope’s relationship forming the core of the story and everything else is entertaining setting and flavour, with commentary on the nature of the internet coming as a bonus.

Part of the charm of the movie is the incredible array of voice actors and cameos who bring the world to life. Reilly and Silverman reprise Ralph and Vanellope and do most of the heavy lifting. McBrayer and Lynch also reprise Fix-It Felix, Jr., and Sergeant Calhoun respectfully, even though they only play a small role in the movie, O’Neill returns as Mr. Litwark and Alan Tudyk – formally King Candy/Turbo – plays Knowsmore the search engine. Bill Hader is uncredited as pop-up advertisement Spamley (for reasons I need to look up), and is joined by Gal Gadot as tough-girl racer Shank and Taraji P. Henson as algorithm Yesss.

It really is the cameos that make it fun as there is plenty of amazing talent who seemingly turned up for a half day of work just to be part of this, adding immense authenticity to the virtual world. Roger Craig Smith, the voice of Sonic the Hedgehog, plays his signature role and the incredibly versatile Maurice LaMarche voices Tapper, one of his many characters. Tim Allen, Anthony Daniels and Vin Diesel all step up to voice Buzz Lightyear, C3-P0 and Groot as part of the Disney website. Most impressive is the only comprehensive cast of Disney Princesses who collectively have some of the funniest material on the film riffing on the illogical tropes the company is known for. The sequence only works because so many of them are represented. Ariel, Belle, Jasmine, Pocahontas, Mulan, Tiana, Rapunzel, Merida, Moana, Anna and Elsa are all voiced by their original performers (Jodi Benson, Paige O’Hara, Linda Larkin, Irene Bedard, Ming-Na Wen, Anika Noni Rose, Mandy Moore, Kelly Macdonald, Auli’i Cravalho, Kristen Bell and Idina Menzel) whilst Cinderella is voiced by her current performer Jennifer Hale. 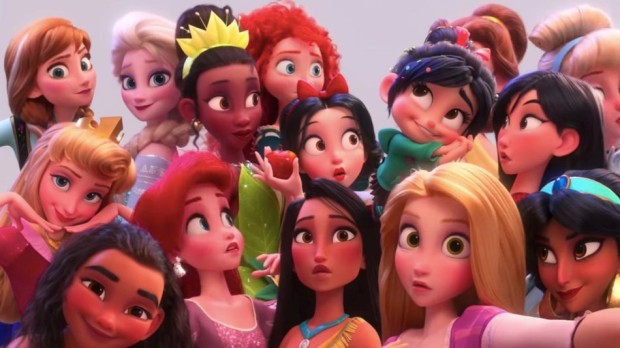 They honestly could’ve gotten away when impersonators for many of these roles, but putting in this extra effort is representative of how much work has been put into this film. It’s a labour of love, there’s no doubt about it.

As mentioned before the friendship between Ralph and Vanellope is central to the story. Ralph is content with his lot in life, now being recognised for his role in his game and passing the time with his best friend. Vanellope, conversely, feels as though she’s in a rut having to race the same three tracks time and time again and always winning. Whilst initially intending to simply repair her game, Vanellope’s hopes for the future changes when she sees what the wider world can offer. She earns of the respect of Shank, a tough but friendly enemy character in Grand Theft Auto/Carmageddon riff Slaughter Race and sees a potential new home. Ralph, meanwhile, has been working tirelessly to create viral videos to buy their replacement part and is heartbroken to learn that Vanellope may not want to return with him. The third act of the film boils down to the pair having to work out what this means for their friendship and accept that sometimes people have to take different paths, a surprisingly powerful message for a children’s film.

Speaking of children’s films, the internet may not be the best setting for this film without being highly selective. You may be surprised to learn that the film-makers make no effort to shy away from the nasty aspects of the internet that children may has encountered. After becoming a sensation on ‘Buzztube’ (very subtle) Ralph accidentally stumbles upon the comments section and sees some of the pointless nastiness that inhabits some public areas. Yesss provides the simple but effective suggestion of ‘never reading the comments’, but Yesss herself is part of the cold process of internet based business models as her role is to manipulate viewers into attaching themselves to trends and just as quickly dismissing them. Jason Mantzoukas provides a solid laugh as the neckbearded obsessive fanboy demanding that Baby Groot explain plot holes, poking fun at some of the internet user archetypes. As a parent we could’ve done without the Dark Web though…I don’t really want to explain that one yet.

There’s some minor quibbles, like fun characters Felix and Calhoun being left in the background. They have a plot involving adopting 15 difficult children but we only see the beginning and the resolution of this conflict with nothing in between. At least the writers recognised that shoehorning them into the main plots would’ve felt like padding, and turned the lack of visibility into a good gag of the end. There’s also a mid-credits joke that’s so meta it would give Deadpool a run for his money.

This is a really fun film and a good example of how to write a sequel. Whilst the scope is increased the focus has remained on the characters. They also examine new themes and conflicts rather than repeating the same plot as the original. It’s also going to take a few watches to pick up all the visual details throughout the movie, and we’re more than happy to give them the time to do that.