Like Die Hard the fact that 1934’s comedy/mystery The Thin Man takes place at Christmas and contains many elements of the holiday, gives the flick a strong argument for being a “Christmas Movie”.  Surprisingly the source material for the Thin Man is a lurid crime novel from famed mystery writer Dashiell Hammett. When director W.S. Van Dyke was hired to bring the story to the big screen, he had the vision to flip it around and rely on sharply written comedy and dialogue to be the driving force of the movie. Despite protest from the studio, Van Dyke put the responsibility of carrying this film on 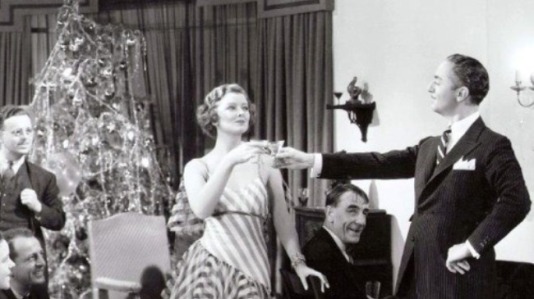 the backs of two very unlikely stars in, William Powell and Myrna Loy. The result was a movie which has become one of the most beloved movies of the era, and one which epitomizes the magic of Hollywood’s Golden Age.

There was once a time when one of our two heroes, Nick Charles was renowned as a brilliant detective. But those days are behind him as Nick has married the love of his life, the wealthy socialite Nora. Together they live a charmed life of; parties, drinking (lots of that), playing with their dog, and exchanging witty banter with one another. When the couple travel to New York for Christmas a young woman turns to Nick because her father, the “Thin Man” of the title, has gone missing and is suspected to have been murdered. While Nick is reluctant to delve back into his sleuthing ways, Nora is excited at the prospect of seeing this side of her husband that she has only ever heard about but, never seen firsthand. Together they decide to take a shot at solving the case, mainly because it seems like it would be a fun way to spend their holidays. Rather than doing the reasonable thing and going to the police when they discover the identity of the Thin Man’s killer, the couple host a post-Christmas dinner and invite all the suspects. There, in one of the moviedom’s most famous scenes, Nick Charles theatrically goes through the 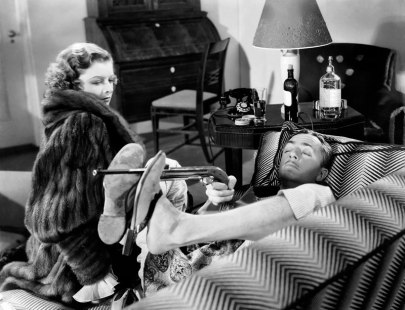 investigation and the suspects before finally naming the offender.

As mentioned previously, William Powell and Myrna Loy were far from MGM’s top choices to star as Nick and Nora. Up until this point, Loy was typecast as a seductive femme fatale while Powell was always the smooth-talking bad guy in gangster flicks. But the director fought for them, having enjoyed working with the two previously in the classic Manhattan Melodrama.  Given the faith and goodwill W.S. Van Dyke had earned from the studio they eventually gave in to his wishes. The result was movie magic, the two performers had an electric chemistry together which to this day makes them one of cinema’s most famous couples. It would probably be close to impossible for less gifted actors to make the audience get behind two wealthy alcoholics who are constantly in search of new ways to entertain themselves, but Powell and Loy are so damned charming and likable together that you can not help but fall in love with them. It is little wonder the two starred in 14 flicks together, including 5 sequels to the Thin Man. While the audience is constantly entertained by the witty barbs they throw around and the disapproving glares Nora shoots at her husband when he’s having too much fun, it is quite obvious these two characters are absolutely mad about each other.

One of the elements of this movie everyone loves talking about is the excessive drinking the Charles’ engage in. In fact when Nick Charles is introduced to the audience it is done with his back to the screen as he is showing the staff at a classy bar the correct way to make a martini. When his wife joins him at this fine establishment (with their dog Asta in tow) she orders twice as many martinis as he has to “catch-up”. In the original novel, Hammett also had these characters drink quite often, but with his story taking place during Prohibition, there was a seedier aspect to it because what they were doing was illegal. But when the film rolled around, this tragic period in American history was over and the attitude of the nation was to drink up again. Seeing as how our protagonists live a life of wealth, drinking up is exactly what they plan to do.

The route, director W.S. Van Dyke goes with the pacing on the Thin Man, may seem odd at first, but taken in as a whole it makes perfect sense. It is not until at least a quarter of the way into the movie that we get our first glimpse of the leads. In fact most of the first act is devoted to introducing the audience to the “Thin Man”, wealthy business man Clyde Wynant. We follow Wynant as he tries to arrange a surprise for his daughter for her upcoming nuptials, along the way we establish key people in his life like; his ex-wife, her new lover, his mistress, etc. all of whom are suspects as the mystery unfolds. This portion of the film is very different from the rest of the events, it almost has the feel of a film noir. Bringing Nick and Nora into this flick completely changes things, as they herald in 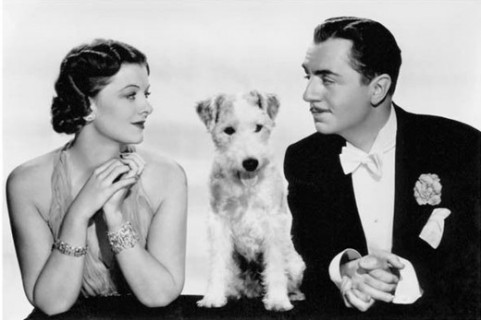 the fun and humor associated with the Thin Man. Somehow Van Dyke is able to perfectly pull off this complete change in tone perfectly without missing a beat.

This is a film where the plot at times takes a backseat to character interactions but as much fun as said interactions are that is perfectly alright. William Powell and Myrna Loy are so much fun together that audiences will be captivated with them whether they are hosting a raucous party or quietly lounging on Christmas morning while Nick tests out his new BB gun (to disastrous results). Powell and Loy would make five more movies in the Thin Man series (no the same guy does not keep getting murdered, the title becomes a Frankenstein-esque thing) and Van Dyke would continue to direct them until his passing in 1943. Despite having no confidence from the powers behind it, the Thin Man was a massive critical and commercial success, and today is remembered as one of the greatest comedies of all time. The film broke ground as it did not portray marriage as an event which transformed people into stuffy bores, but rather marriage was the beginning of a great adventure. Despite the fact the Thin Man takes place during the Christmas season, it truly is a movie that can be watched and enjoyed at any point of the year.