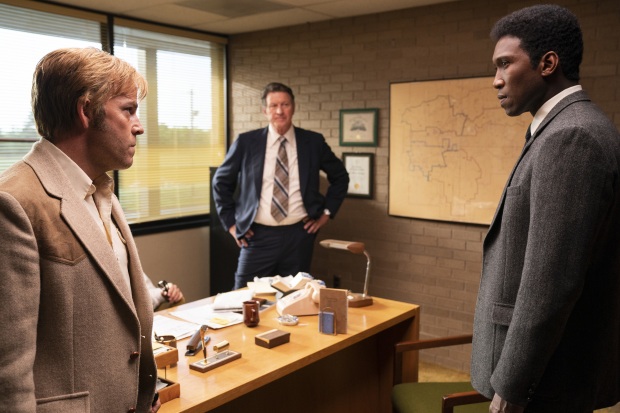 1980: In the wake of the Brett Woodard arrest, Wayne is given a hard choice about his future in law enforcement. Hays tries to push Amelia away but she has other ideas.

1990: Wayne and Edward Hoyt endure a frank and harrowing conversation. Roland experiences a meltdown. Wayne and Amelia discuss their future.

2015: Roland and Wayne track down Mr. June. The conversation leads to the ultimate fate of Julie Purcell. Or does it?

Review: In a season that’s been more than a little frustrating at times, season three of HBO’s True Detective went out with a definite bang instead of a whimper. Tense, eloquent, bittersweet, and ultimately satisfying, “Now Am Found” is everything you’d want in a season finale. And it’s deeply satisfying to boot.

In some ways “Now Am Found” is a microcosm of the entire season, in that it starts out with a red herring and gradually builds toward an ultimate reveal. The opening conversation between Wayne and Edward Hoyt begins with heightened tension and stays that way, with Mr. Hoyt dropping occasional veiled threats about Wayne and his family. It’s clear that Mr. Hoyt knows more than he tells Wayne yet he’s comfortable letting Hays twist in the wind, with the warning that others who are looking to hurt Julie will want to find her if Hays doesn’t drop the case. Hoyt never really reveals anything about Julie or even if she was at Hoyt’s estate. The audience, under the impression that a big reveal was eminent, instead is left with Wayne facing a moral dilemma and an existential/career/family crisis. Ultimately, Wayne chooses his family and his own personal well-being over the case. 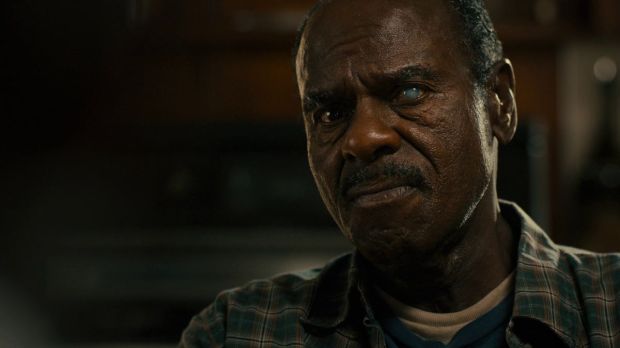 Up until just recently, the 2015 storyline has been the least compelling of the three time periods. Ironically, this shifts dramatically in the season finale as the bulk of the action takes place in 2015. Following in the footsteps of Tom Purcell, the duo break into the abandoned Hoyt estate and find the “pink room” where Julie was held captive. However, it’s Harris James’ wife who ultimately leads Wayne and Roland to track down Mr. “June” Watts, the caretaker of the Hoyt estate. Although this season hinted at a larger conspiracy involving sex trafficking and the occult, the reveal is much simpler.

After Isabel Hoyt loses her daughter, she spots Julie at a company picnic. Harris James approached Julie’s mother Lucy about letting Julie and Isabel play together. It starts out harmless but escalates into full-blown Southern Gothic when Will is accidentally killed in the woods and Isabel takes possession of Julie. Isabel then drugs Julie with lithium for years until Julie eventually escapes with the assistance of Mr. June. Isabel, distraught, subsequently kills herself.

Some may see it as quite convenient that Mr. June confesses all of this to Wayne and Roland, however it’s clear that the situation has been weighing on him for some time. Indeed his aim was for Roland and Wayne to either take him in or shoot him because “he can’t live with it anymore.” West and Hays chose neither. Both know a thing or two about guilt and regret. In a deft move of pure justice, Roland and Wayne leave Mr. June to his own devices, his own personal torment. As Roland implies, if Mr. June can’t live with it he can kill himself…but they won’t help. Dorff caps off an amazing season long performance with his best acting yet. I sincerely hope this role serves as a vehicle comeback for Mr. Dorff.

Upon leaving Mr. June, Wayne and Roland track down the last known whereabouts of Julie at a local convent. Going by the name Mary July, Julie apparently worked there for years before dying of AIDS in 1995.

Because you see a funny thing happens on the way to the forum, the daughter of the groundskeeper runs into Roland and Wayne before they leave the convent. That little girl happens to be named Lucy and if you think that’s coincidence I have a bridge I’d like to sell you. Indeed, after reading a bit of Amelia’s book later Wayne puts the final pieces of the puzzle together. Julie’s friend from elementary school recognizes Julie years later at the convent after taking over grounds keeping duties from his father. Eager to help the nuns subsequently help fake Julie’s death and Julie goes on to marry her childhood friend give birth to their baby girl Lucy. 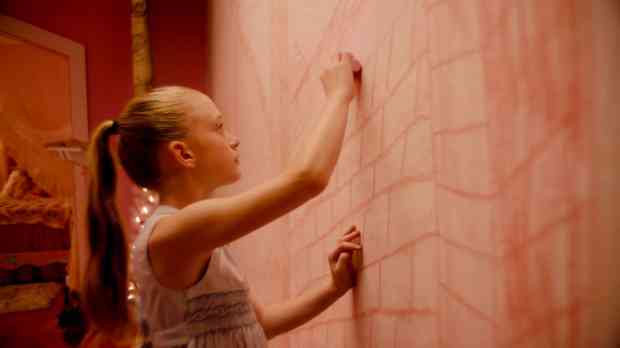 Wayne seeks to follow the mystery to its conclusion and tracks down the adult and very much alive Julie. But in a heartbreaking turn of events, in a cruel twist of fate, Wayne’s memory once more betrays him as he pulls up to Julie’s house and he completely forgets where he is. All I could think of was Burt Lancaster as “Moonlight” Graham in Field of Dreams where he says, “It was like getting this close to your dreams and feeling them brush right past you.” And yet we are left with the question of would it have mattered if Wayne had confronted Julie with the truth? Could it have made things problematic for both of them? In the end is it more beneficial sometimes to let the past stay dead? These are questions that True Detective has raised all season long, questions with no easy answers.

Of course there are a few loose threads that do not receive a resolution. Wayne’s son Henry keeps the address Wayne had on him when he picked him up at Julie’s, rather than throwing it away. The implication is that Henry will follow-up where his father left off. But nothing is certain. Additionally, we never get an explanation as to the rift between Becca and Wayne. Indeed based on their interactions in this final episode the relationship doesn’t seem estranged. Yet as these two dangling threads prove, as in True Detective so goes it in life: we don’t always get the answers we seek.

After a stellar first season, True Detective took several steps back with its sub-par sophomore effort. It’s so gratifying to see the show rebound in spectacular fashion with this third season. Three years ago it seemed a foregone conclusion that True Detective would never return to the airwaves. Now it’s all but certain that audiences will get a fourth season.

And like Wayne Hays at the end of “Now Am Found,” the audience finds itself descending into the jungle, uncertain what lies ahead for True Detective but hoping for the best. 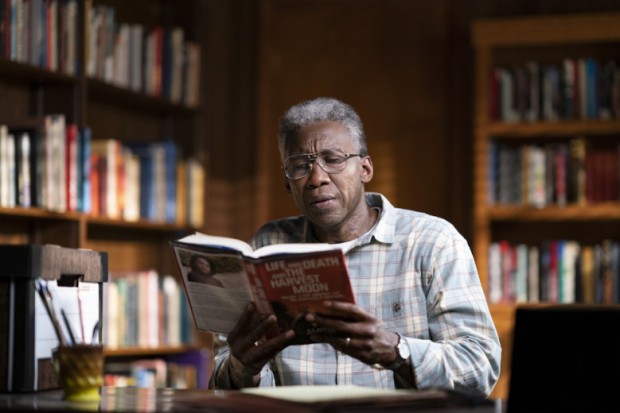