Members of the press have one of the most thankless, yet most important jobs in the world. The need to inform the general populace and hold those in power accountable is no easy task, yet they somehow do it 24 hours a day. Considering the experiences they have in the line of work, journalists open themselves up to amazing stories which are perfect mining grounds for Hollywood. In these films they are presented in both good and bad lights as they try to get their scoop. So here in no particular order are the Top 10 Journalism Movies. 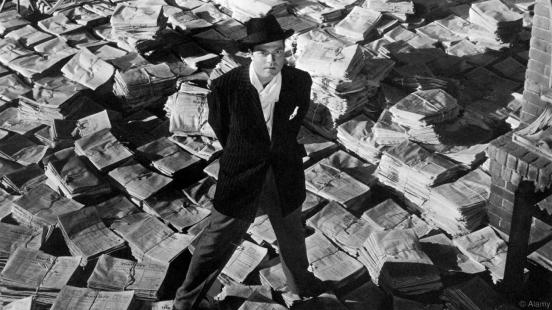 Citizen Kane: The film debut for Orson Welles, which has been dubbed by many the greatest movie ever made. When Charles Foster Kane was offered any number of gifts from his adoptive media mogul father, the young man simply requested a small time newspaper. He and his friends vow to use this paper as a tool to fight for the interests of the common people. It is not long before Kane’s notoriety begins to grow and he gains more power and influence. His little newspaper soon grows into a vast number of; newspapers, radio stations, and other outlets turning him into the ruler of a media empire. But mortality comes for us all, and in the wake of Kane’s death an intrepid reporter sets out to chart the life of this powerful individual. Through interviews with former friends and associates, the unnamed journalist paints the picture of a man who gradually gave up on his principals to gain power and in the process lost everything. 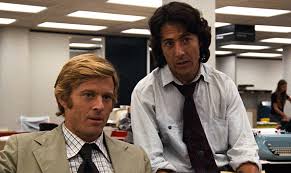 All the President’s Men: Based on the true story of legendary reporters, Bob Woodward and Carl Bernstein, in their efforts to expose the wrongdoings President Richard Nixon. On a seemingly normal assignment to cover a break-in at the Watergate Hotel, Washington Post reporters Woodward and Bernstein (Robert Redford and Dustin Hoffman) are suspicious when they discover high powered attorneys working behind the scenes for the accused criminals. There hunch is confirmed when a mysterious insider known only as Deep Throat informs them they are on the right path and offers help from the shadows. As they “follow the money” the two discover that funds from the president’s reelection campaign was deposited into the burglars’ bank accounts. This puts the two young reporters directly in the line of fire, of one of the most powerful people in the world. Now they find themselves combating: the executive branch, the demands of their editor, and public apathy all in search of the truth.

Ace in the Hole: Legendary director Billy Wilder took on the dark side of the press with this 1951 masterpiece. There was a time when Chuck Tatum (Kirk Douglas) was a big reporter in a major city, but thanks to his numerous vices he now finds himself at a desk for a small paper in New Mexico. Here he displays an aptitude to exaggerate the small stories he comes across to turn them into sensational headlines. When the owner of a local mine, Leo Minosa, gets trapped during a cave-in, Tatum sees his chance to take absolute control of the story. The reporter sets out on a crusade of manipulating everyone he can, from the paper’s impressionable photographer to the local sheriff and even Minosa’s wife, in order to keep Minosa trapped in the cave as long as possible. With everything in place Chuck Tatum sets out to milk this story for everything it is worth. However as Minosa’s health begins to deteriorate due to the delays being created in his rescue it could spell trouble for the reporter and his co-conspirators. 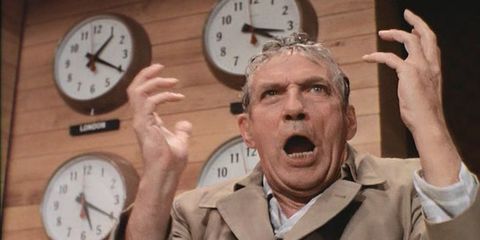 Network: An almost satirical look at the news media of the 1970’s which is still eerily relevant today. Faye Dunaway leads an all-star cast as ruthless TV executive Diana Christensen, a woman who is charged with keeping headlines sensational and now she is looking for a new hit. She finds it in a surprising place, when veteran news anchor Howard Beale (Peter Finch who was awarded an Academy Award for his performance) loses it on the air after discovering he will be fired. His tirade against the modern media and television industry galvanizes his viewers and Diana pitches him as the host of a nationally broadcasted “news” show. Initially Beale’s loud proclamations of doom win him a massive audience, he even finds a fan in the network president. Inevitably he starts speaking up against the network itself and hemorrhaging viewers. Given that the head of the network will not allow Beale to be fired, Diana and her colleagues have to resort to more extreme tactics to take him off the airwaves. 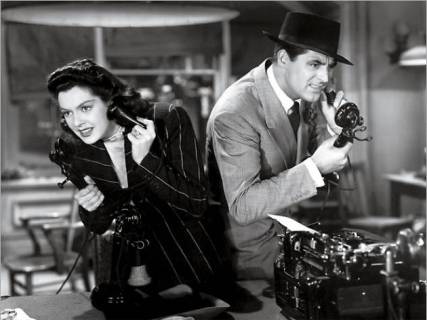 His Girl Friday: One of the most beloved movies ever made thanks largely to the chemistry of stars Cary Grant and Rosalind Russell. For Walter Reno the editor of the Morning Post one of the worst days of his life was when his top reporter, Hildy Johnson returns after months away to demand a divorce….from HIM. It seems as in the aftermath of the doomed marriage, Hildy has fallen in love with a whitebread insurance agent, Bruce Baldwin and plans on marrying him as soon as possible. Still holding feelings for his ex-wife, Walter does not believe Bruce is good enough for Hildy and sets out to delay, and eventually stop the wedding. Knowing Hildy cannot resist a good scoop, he digs up an old story of hers about a man on death row, whom she believes is innocent. Hijinks ensue and Hildy is forced to reflect on if she wants to settle down in domesticity or continue on as the dogged reporter she is. 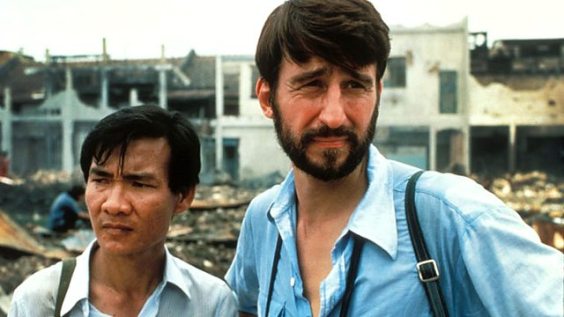 The Killing Fields: To this day, the atrocities of committed by the Cambodian regime the Khmer Rouge is one of the least known about genocides of the twentieth century. This violent era in world history serves as the backdrop for one of Britain’s finest films. American reporter Sydney Schanberg and Cambodian journalist Dith Pran are brought together in the midst of the Cambodian Civil War which results from the Vietnam War spilling over. Through their eyes we see a totalitarian regime rise to power in the country, while Schanberg is able to get back to the United States his efforts to help his friend escape fail as Pran is arrested. While he is acclaimed for his work back home, the reporter is haunted by what happened to his friend and ponders if he left him behind intentionally. The Killing Field is an emotionally powerful film, which is bound to stay with viewers even after credits roll. 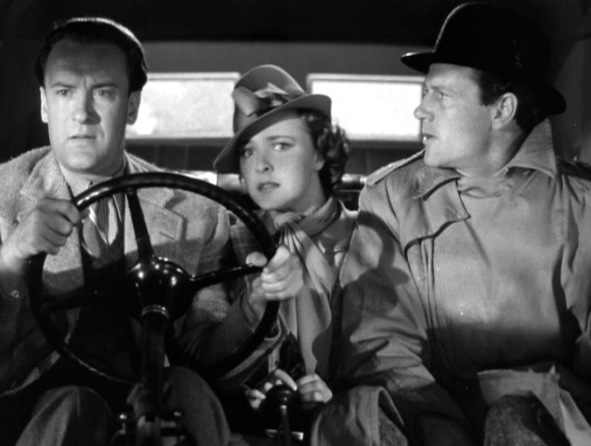 Foreign Correspondent: Young American reporter Johnny Jones (pen name Huntley Haverstock) is sent to work as a foreign correspondent in London as the Second World War is beginning to brew. When he witnesses the assassination of a political leader; he and a diplomat’s daughter named Carol as well as fellow reporter Scott ffolliott (he does not capitalize his name on purpose) soon discover more at work. As they investigate the crime, they find themselves targeted by a well-placed Nazi spy ring operating in Britain. As the continent of Europe marches on the path to inevitable war, Haverstock and Carol discover who may be behind everything and it shocks them to their very core. 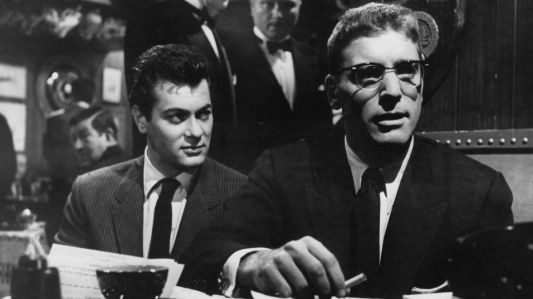 Sweet Smell of Success: In the world of the New York press no name is bigger than JJ Hunsecker (Burt Lancaster), though despite the power he wields in his column, he can not convince his sister to end her romance with a musician. This leads to him exploiting ambitious press agent Sidney Falco (Tony Curtis) who has been trying to get his clients into Hunsecker’s good graces. His request is that Falco not only use his professional position to break them up, but to do his best to destroy the musician in the process. While Sidney is morally repulsed by what he is asked to do, the allure of the career boost he would get may prove too much to resist. Sweet Smell of Success is a haunting thought provoking film; thanks to the powerful performances from Lancaster and Curtis, as well as the beautiful cinematography of James Wong Howe. 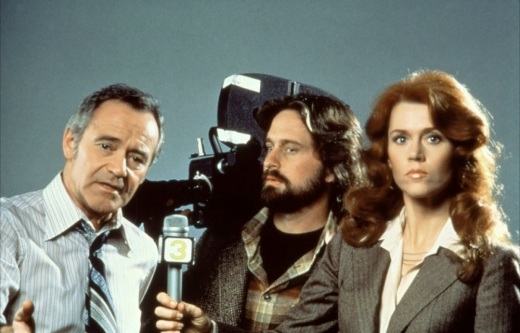 The China Syndrome: Kimberly Wells (Jane Fonda) is an ambitious reporter hoping to make a name for herself by breaking a top story. Unfortunately her bosses at KTLA only see her as eye candy. While doing a standard human interest piece at a nuclear power plant, she and cameraman Richard Adams (Michael Douglas) witness a near meltdown of catastrophic proportions. According to the official story there was no incident, but Richard and Kimberly have tape that says otherwise. Strengthening their case is the fact that one of the executives at the plant (Jack Lemmon) is noticing the aftereffects of the crisis. Together the three of them try to get the word out that the nuclear power plant is unsafe and is poised for a meltdown, unfortunately the powerful people behind the plant are standing in their way.

The Year of Living Dangerously: During the 1965 revolt in Indonesia, the government is doing it’s best to control what the foreign media reports. That will not work for Australian reporter Guy Hamilton (Mel Gibson) who along with his guide and photographer Billy (played by a scene stealing Linda Hunt in a gender bending performance) want to see the real side of the conflict. Through Billy’s connections Guy crosses paths with Jill (Sigourney Weaver) at the British embassy who is trying to get back to London before the nation is thrown into disarray. Naturally a romance between the two is struck in the midst of this chaos. When Guy stumbles across a shocking conspiracy he risks alienating everyone as he ponders what to do with the information he discovers. The combination of romance, international intrigue, and social commentary has made the Year of Living Dangerously a major favorite with moviegoers.