The Scene: At the climax to one of the greatest films ever made, we finally get to the point where Victor Lazlo will escape Casablanca and continue his battle against the Nazis. The price for this is that his wife Ilsa will stay in Casablanca with her old flame Rick. Despite being a cynical and aloof protagonist, Ilsa made Rick happy years ago in Paris and is without a doubt the love of his life. A twist drops when Rick changes the arrangement and tells Ilsa she needs to be with Victor, because she is what keeps him going in the face of an insurmountable enemy. Deep down both Ilsa and Rick know that what they once had is gone forever, and that for the sake of the greater good they have to part ways. Ilsa boards the plane with her husband to leave Casablanca behind forever. Before we can fully process the emotionally charged moment which just unfolded, Major Strasser of the Third Reich arrives at the airfield and naturally attempts to stop the plane. This leaves Rick with no other option but to shoot him in order to ensure the safety of Victor and Ilsa. It looks like he is in deep water when the authorities arrive and ask the corrupt Captain Renault, who has witnessed everything, what happened. Rather than have the closest person he has to a friend arrested, Renault orders his men to “round up the usual suspects”. As this classic piece of cinema comes to a close we see the two men walking down the airfield discussing plans for the future, starting the beginning of a beautiful friendship. 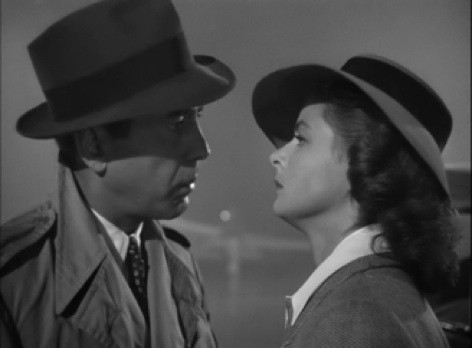 The Breakdown: Everything has come down to this moment. We have been conditioned by movies that the hero gets the girl in the end, especially when it is a star-crossed romance with hurdles to clear. But in a movie seen by many as one of the great cinematic romances, this does not happen, rather our couple realize that for the sake of the greater good they can never be together. This moment is absolutely heartbreaking for the audience, especially as Rick goes through the fact that their problems do not mean anything in the face of a world gone to hell. This completes the character evolution he has experienced, throughout Casablanca as he finally moves past his own pain and Humphrey Bogart plays it to perfection. Despite holding a strong tough-guy composure, you can see in his eyes the hurt this is causing. The sharp dialogue the Epstein Brothers wrote, hit harder in this scene being spoken by him. Speaking of the dialogue, this scene is the source of many of the greatest lines in movie history from “this is a topsy turvey world and the problems of two people don’t amount to a hill of beans” or “round up the usual suspects!” and the reiteration of the classic “here’s looking at you kid”. Director Michael Curtiz films this scene with a hazy look caused by the fog on the runway which only adds to the atmosphere of the moment. It was said that he was adamant about casting Ingrid Bergman in the co-lead of Casablanca because against the dark and gritty backdrop of the rest of the movie she “glowed”, and no more is that evident than here. The director seamlessly shifts gears completely on the tone when the arrival of Major Strasser ramps up the tension of the event, and the audience wonders what consequences Rick will have to face for killing a man right in front of the police captain. Luckily this scene is filled with so many gifted actors that nobody misses a beat; from leads Bogart and Bergman, to the supporting players Claude Raines and Conrad Veidt.

Best Bit: Humphrey Bogart’s passionate delivery of the reasons they can never be together. He speaks with conviction about he and Isla having to do what is right no matter how hard it may be. Yet on a dime he shifts, calmly and lovingly tells her that they will always have Paris.

One thought on “Classic Scene: Boarding the Plane”