Welcome back to the MCU Villain Showdown! Here the biggest bad guys of the MCU will be competing against each other in bouts judged on who was the most successful villain, who would win in a fight and who we like best. The FIRST and SECOND parts can be found here.

Today we’re looking at the Upper Right bracket, starting down the road towards finding a second contestant for the finale. To say that this randomly selected line-up features some big players is an understatement. 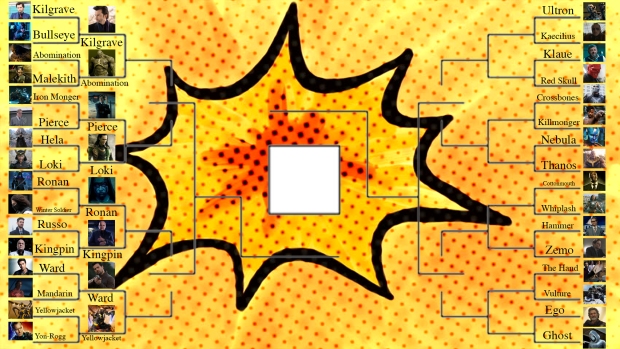 Successful Villainy: Right of the bat we get a tricky competition – science vs magic is hardly an equitable playing field. This portion of the round is all about who best completed their evil scheme, let’s start breaking that down…

Ultron (James Spader) was a creation of Tony Stark, designed to protect the world, but he felt that human extinction was a better bet and took some real strides towards making that happen. Having taken over the internet and build a giant army of clones to fight alongside him, in addition to recruiting Quicksilver and Scarlet Witch to help keep the Avengers at bay, he rose an entire European city miles into the sky as a makeshift meteor. Kaelicius (Mads Mikkelson), meanwhile, had grown disillusioned with the order of sorcerers and set out to destroy the three magical Sanctums and open a portal to the Dark Dimension, home of Dormammu.

Normally we don’t spend this long on this part of the round, but this one is neck and neck. Ultron spanked the Avengers, almost putting them all out of commission, and was moments away from Earth shattering catastrophe when his own creation, Vision, stopped him. In spite of this, we think Kaelicius just edges ahead as he did destroy all the Sanctum’s, killed the Ancient One and did open the portal to the Dark Dimension, only stopped by Doctor Strange’s use of the Time Stone. He takes the point…but it’s a photo finish.

Fight!: Again, this is a tight battle. Ultron is able to jump from body to body to prevent being killed but he is bound to the physical. Eventually he will run out of material to work with and Kaelicius has a massive amount of control over the physical world, being able to reshape it to his will. There’s no reason to think that he and his followers wouldn’t just turn Ultron inside out. Another point to Kaelicius.

Who We Love to Hate: Ultron may not have been the cold, cynical monster shown in trailers but he was plenty of fun during the movie. James Spader had a unique take on the characters. Kaelicius is nowhere near as memorable, coming off as a standard evil guy. Point to Ultron.

Result: This is a surprise result to say the least, we really expected Ultron to be moving ahead. Instead, with a 2 – 1 finish it looks like Kaelicius’ mystic arts might actually take him further than expected.

Successful Villainy: Sadly for our boy Klaue (Andy Serkis) his only successes occurred off screen, that being his infiltration of Wakanda and the theft of vibranium. Since then things haven’t gone especially well for this arms dealer. He struck a bank-breaking deal with Ultron, but lost his arm in the process. He later got equipped with a sonic-blasting arm to pull off heists with Killmonger, who then murdered him. Red Skull (Hugo Weaving) fared better having split from the Nazi party to form Hydra, become a super soldier and become a force to be recommend with. Carting around an Infinity Stone certainly helped. It was only through the efforts of Captain America he didn’t wipe every major city off the map. Point to the Red Skull.

Fight!: When Klaue geared up with a sonic blaster prosthetic he had the fire power to hold Red Skull at bay for a short while, but he’s facing a man who can go toe to toe with Captain Freak’n America. Klaue is getting pummelled and Red Skull is getting a point.

Who We Love to Hate: Hugo Weaving is known for more than a couple of memorable movie villains, but Serkis is an incredibly natural entertainer. Every interaction he has in Black Panther is pure gold and it’s a shame we didn’t get more of him. Point to Klaue.

Result: Red Skull is one of the classic villains for a reason. Klaue was fun, but the writing was on the wall. 2 – 1 in favour of Red Skull.

Successful Villainy: Ol’ Crossbones (Frank Grillo) is starting out on the back foot as he spent most of his villain career as a lackey for Hydra. That said, if his main goal was to stay on Captain America as a sleeper agent he did pretty well. This was followed by a stint as a somewhat successful terrorist. None of this, however, compares to Killmonger (Michael B. Jordan) who single-handedly staged a successful coup against the king of Wakanda, taking his place both on the throne and as Black Panther. Obvious point to Killmonger.

Fight!: In this regard they’re quite evenly matched. Both come from a military background and have operate both on and off the grid. Killmonger is a world-class mercenary with the fortitude to take on Black Panther, while Crossbones was trained by SHIELD/Hydra, packs a couple of high-impact gauntlets and stood his ground against Captain America. Let’s not forget Killmonger’s scarification though…they represent each successful kill. Killmonger is not to be trifled with and gets the point.

Who We Love to Hate: Killmonger is widely regarded as the definitive point where the MCU started delivering interesting and memorable villains. Michael B. Jordan is a large part of that with a stellar performance. Clear point to Killmonger.

Successful Villainy: As we all know, Thanos (Josh Brolin) successfully collected all the Infinity Stones, beat the pulp out of the Avengers and wiped out half of all life in the universe with a snap of his fingers. Nebula (Karen Gillan)…well…um…she tried to get the Power Stone and failed, attack Xandar with Ronan and failed, kill Gamora and fail…

Who We Love to Hate: Thanos certainly scores big in this category for shaking the franchise to its very core. His role as the ultimate arch-villain to the entire Avengers is done extremely well. On the other hand we do love a good redemption arc and, well, we feel kinda bad for Nebula getting the short straw in the initial draw. Let’s give Nebula a point here.

Result: Naturally the round goes to Thanos with a 2 – 1 score.

We’ve got one more portion of the bracket to go in the initial line-up! Stay tuned!