At this point in the March Madness style MCU Villain contest we’ve been through almost 30 rounds judging who would win in battle, who was most successful in their evil scheme and who we like best. We started with 32 bad guys from across the 22 Marvel movies and spin-off TV shows and now we’re down to Loki, Kingpin, Thanos and Helmut Zemo. Time for the last three rounds…

Let’s get in to the semi-finals.

Successful Villainy: It’s interesting that after so many similar villain types for Loki (Tom Hiddleston) to battle, include Hela and Kilgrave, that he’s up against someone so human as Fisk (Vincent D’Onofrio). Fisk, or the Kingpin, runs on almost pure instinct and fury, failing to raise above base level human aggression. His devious mind and boundless cruelty is what put him on the top of the underworld. On the other hand, Loki has been describe as having a brain like a bag full of cats. They’re both devious in their own way, Loki simply prefers keeping his hands clean. Using his mischievous powers and driven by greed Loki has taken the Asgardian throne twice. But if that’s the measure of the success then Kingpin is going to come out on top as he was much more effective at both taking and holding on to his crown. Point to Kingpin.

Fight!: If we were to rank people from the MCU based on who we’d least want to be in a fight with, Fisk would be near the top of that list. Because it would hurt, and it would drag on. He’s purely sadistic and his size and strength make him nigh unstoppable when he loses control of his temper. Does that mean he’d be able to go toe-to-toe with an Asgardian? Probably not. Loki is going to be rocking strength and durability closer to Thor level that Kingpin’s. That’s before you factor in his magical powers. Easy point to Loki.

Who We Love to Hate: When you think back to it, Thor is one of the few characters in the MCU who only operates as a double act. You need someone for him to bounce off and Loki plays that part better than anyone. The first thing they did after they killed Loki in Infinity War was pair Thor up with Rocket Raccoon as a snarky replacement. We don’t just love Loki as a villain, we need him to make Thor what he is. Vincent D’Onofrio is one of the biggest reasons Daredevil struck gold, but Tom Hiddleston gave The Avengers their villain. Point to Loki, the cheeky sod.

Result: It’s pretty hard not to expect it, but Loki is popular for a reason.

Successful Villainy: Damnit Zemo (Daniel Brühl)…I’m sorry you have to do this. You’re a crafty devil who turned the Avengers against each other. You got Captain America and Iron Man literally beating each other until they couldn’t hit no more. Even if we ignore that your exit strategy was ‘shot myself’, you did well. Better than killing yourself as your final play is retiring to a damn farm and watching the sunrise, which is what Thanos (Josh Brolin) did. After punching his way through The Avengers, The Guardians of the Galaxy, the Collector, the Nova Corp, the Asgardian survivors, the Wakandan army and who knows what else Thanos had collected all six infinity stones and promptly wiped out half of all living things. Point to Thanos.

Fight!: Zemo may be a thinker, and perhaps he could come up with a plot against Thanos. I might dwell on this detail a bit more if Dr. Strange hadn’t looked through several million potential futures and couldn’t find a solution then Zemo is out of luck. Thanos wins this point because he’s unstoppable, pure and simple.

Who We Love to Hate: We honestly didn’t think Thanos would be an especially well developed character as we learned very little about him prior to his Infinity War spotlight. At this point the quality of the villains had been increasing with Zemo being a stand-out success as he was sympathetic and believable. It didn’t seem likely that a character functioning on such an enormous scale could be capable of being sympathetic. But they managed it surprisingly well with much of Infinity War‘s character time being spend on Thanos rather than spreading it thinly across all the established characters. So…point to Thanos.

Result: Little surprise but Thanos is taking home a 3 – 0 victory and moving through to the finals. 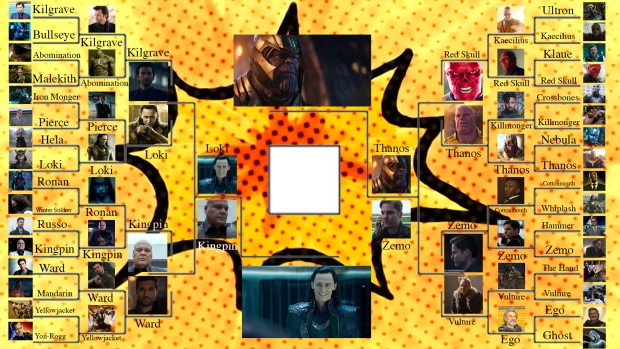 LOKI, GOD OF MISCHIEF VS THANOS

Successful Villainy: One major strike against Loki in this round is that is one major military action – the invasion of New York in a bid for world domination – was only achievable with the backing of Thanos. The big purple guy not only sent Loki on this quest but he outfitted him with the Mind Stone and an army of Chitauri. Thanos’ grand scheme was set back a few steps due to Loki losing the Mind Stone during the battle with Thanos having to fight the Avengers to retrieve it. Loki has failed almost every scheme he’s set out on, while Thanos’ only misstep being in delegation. Point to Thanos.

Fight!: Hey, I think this is the only the second time we’ve seen any of our match-ups play out on the big screen! Loki and Thanos did, in fact, fight one another in Avengers: Infinity War with Loki pulling the ol’ invisible knife routine only for Thanos to…murder him. Point to Thanos, I guess.

Who We Love to Hate: In the previous round we spoke of our praises for Thanos and how well they put together an interesting villain for a whole universe of heroes to be scared of. Loki still edges ahead of him in the popularity stakes because his appearance constitutes a bona-fide marketing tactic. Even after his demise in the juggernaut series there’s talks of a solo series. Point to Loki.

Result: If would be easy to accuse us of having Thanos slated for the top spot from the beginning…he really is the biggest bad of the biggest movie franchise ever. We conceived of the three categories specifically to even the playing field and give everyone a chance to get through their respective rounds. Quite often we didn’t know what the end result was going to be before we started writing. Finally we can honestly say that Thanos has earned this final 2 – 1 win over Loki and the award him an imaginary trophy as Champion of the MCU Villainverse. Yay? 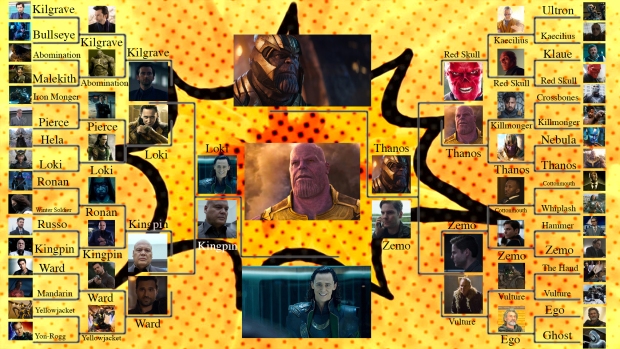 Thank you for joining me on this little project…time to go see Avengers: Endgame.