In 1993 editor Karen Berger shook the comic world forever.  Wanting to publish comics that did not fit the mainstream model, she was given the green light from DC Comics to start her own separate publishing line Vertigo. Recruiting a talent pool of creators who are now icons of the industry, Vertigo completely changed the game in the comics industry with books intended for a more mature audience which attracted new readers from outside the usual comic audience. Many of the comics Vertigo gave us are now considered classics of the medium like; Sandman, Hellblazer, 100 Bullets, Y the Last Man and more. However in recent years the once proud publisher fell into being a shell of it’s former self. Karen Berger and Shelley Bond, the two women who played the biggest roles in overseeing the publisher during it’s peak were controversially let go and those who took over after them seemed not to know what direction to go in. This meant the announcement which came last week seemed inevitable that DC Comics would be shutting down the Vertigo imprint. But during a run of 26 this publishing line changed comics as we know them and left a legacy which will be felt for many years to come. So in honor of this soon to be departed bright spot in the comics medium here are the definitive comics of Vertigo. 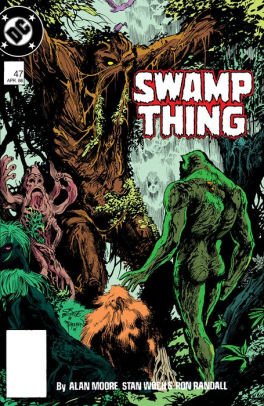 Swamp Thing: True Alan Moore’s seminal run on Swamp Thing was not published under the Vertigo imprint, but it is the book credited for setting the tone of the publishing line. Having free reign as a newcomer on a low selling title, he British scribe utilized the marshy character to explore themes of; humanity, religion, environmentalism, and other heavy topics usually not explored in standard superhero fare. Moore’s big impact on the series was that he changed Swamp Thing’s origin so that he was a never the scientist Alec Holland but instead was a being who merely believed he was which drove the character to ponder what exactly he was. Naturally such an adult-oriented book as it was the Comics Code Authority would not put it’s seal of approval on Swamp Thing thus began to movement to create a new publishing line for such stories. 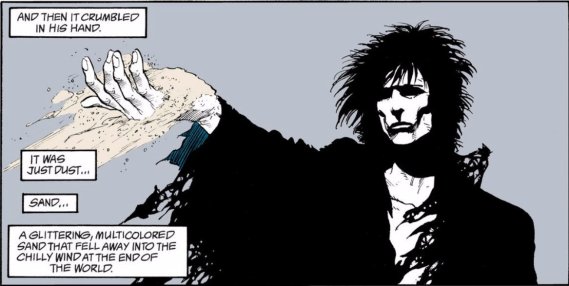 The Sandman: The book which brought a certain quirky writer named Neil Gaiman to everyone’s attention. With a host of talented artists to work with, Gaiman told the epic tale of Morpheus the Lord of Dreaming and member of the omnipotent Endless. This series beautifully blended mythology, fantasy and horror, while the nature of the series gave Gaiman the freedom to tell whatever kind of story he wanted. During it’s seven year run, the Sandman came to epitomize coolness in the comic medium and spawned a number of spin-offs and sequels. Even now as Neil Gaiman stands as one of the great fantasy writers this comic is still pointed to as an example of his best work. 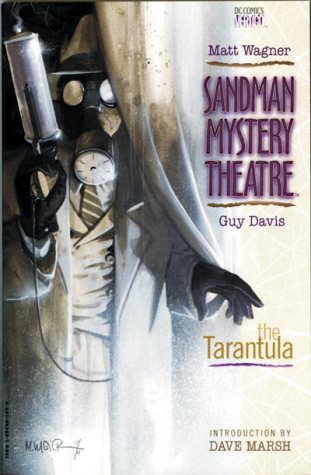 Sandman Mystery Theater: For 70 issues this series proved that superheroes could fit perfectly under the Vertigo banner when approached correctly. Set in the 1930’s, Golden Age hero Wesley Dodd AKA the Sandman was given a dark noir environment to operate in with the tone largely set by the initial artist Guy Davis. Along with his girlfriend/partner Dian Belmont, the Sandman operated as a detective investigating the darkest of crimes armed only with his wits and gas gun. Despite the Depression Era setting, controversial topics of the day were not off-limits for Sandman Mystery Theater which left an influence on superhero comics which is still felt. 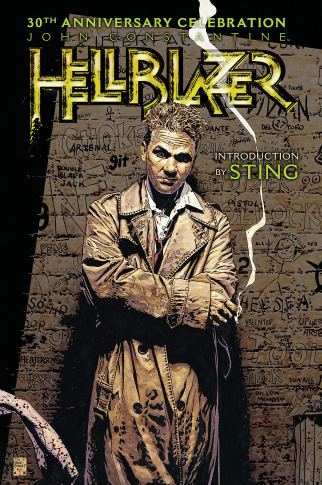 Hellblazer: Spinning out of Alan Moore’s Swamp Thing run, John Constantine is a smarmy, tough-talking, chain-smoking demonologist and occult detective. With a run from 1988-2013 Hellblazer easily became Vertigo’s longest running comic attracting a number of talented creators such as: Garth Ennis, Warren Ellis, Paul Jenkins, Eddie Campbell, Lee Bermejo, Dave McKean, and so many more. Even when Hellblazer came to an end he proved to be such a cool antihero that John Constantine was returned to the regular DC Universe and has remained ever since, though many complain the edge afforded to him by a “Mature Readers” label has been dulled. The character of Constantine amassed a large cult following and inspired a number of adaptations in other media including a film and a criminally underrated TV series. 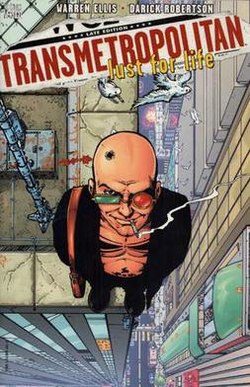 Transmetropolitan: Writer Warren Ellis and artist Darick Robertson realized the creative freedom offered by Vertigo would be the perfect home for their crass and satirical journalist Spider Jerusalem. Working in the City of a cyperpunk dystopian future, Spider takes on the ultra right wing President Callahan dubbed “the Smiler”. Naturally the president does not like some journalist with an attitude as a thorn in his side and goes to great lengths to have Jerusalem discredited or killed. Transmetropolitan is a comic which strangely may fit the modern political atmosphere more than when it was created. 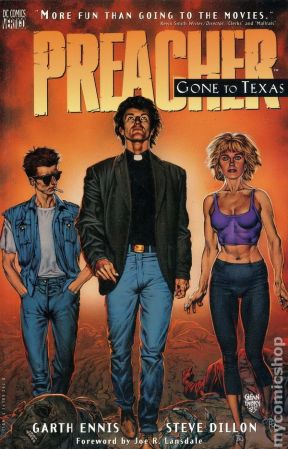 Preacher: A controversial but critically acclaimed book from the team of Garth Ennis and Steve Dillon. Jesse Custer is a small town preacher in Texas who’s life is changed when he, along with his ex-girlfriend Tulip O’Hare and the vampire Cassidy are sent to find God who has abandoned Heaven. Complicating matters is the half-demon and half-angel entity known as Genesis who has possessed Custer. Along the way in their journey Ennis and Dillon ensure they encounter no shortage of strange and memorable characters including the break-out antihero Saint of Killers. Despite the fact the series ended almost two decades ago, Preacher still carries a cult fandom which has only grown thanks to AMC bringing it to television. 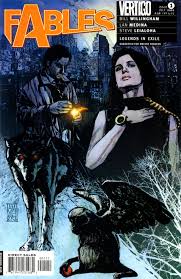 Fables: Have you ever wanted to know how famous characters from fairy tales would operate in the real world? Having been chased from their homes by a villain known as the Adversary the various characters of folklore AKA “Fables” have been driven to exile where they have set up their own community in New York dubbed Fabletown. The series largely revolved around Snow White who is the Deputy Mayor and the Bigby Wolf who serves as sheriff. Together they; solve murders, deal with dissent, and protect the Fables from the Adversary all while ensuring they remain hidden from the “mundies”. The team of Bill Willingham and Mark Buckingham prove brilliant at providing modern real world takes on the famous characters of fairy tales ensuring every reader will have a favorite. 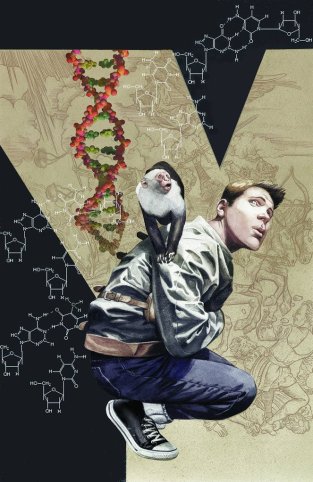 Y: The Last Man: A strange mystery illness has swept the earth leaving escape artist Yorick Brown and his pet monkey Ampersand as the last males on the planet. What sounds like it could be a dream come for Yorick quickly proves to be a nightmare thanks to creators Brian K. Vaughan and Pia Guerra. Under the protection of Agent 355, Yorick must investigate this mysterious illness which has left humankind on the brink of extinction. All along, he simply his desire to reunite with his fiancée Beth who was last seen in Australia but in the chaos could be anywhere. 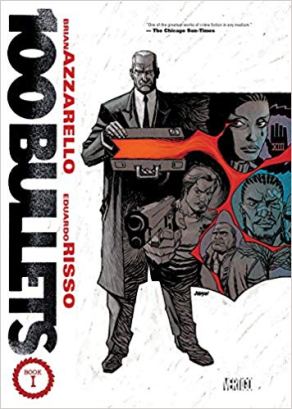 100 Bullets: For much of it’s history Vertigo was known for it’s science fiction and fantasy offerings, enter the creative team of Brian Azzarello and Eduardo Risso. Under the editorial guidance of Axel Alonzo, these two crafted a gritty crime epic which had readers hooked. Each story arc involved someone who had been wronged and wanted revenge; a disfigured private eye, a small-time smuggler, a drug addicted boxer or any number of people who fit perfectly in this pulp world. They lives change when they meet the mysterious Agent Graves, who presents them with an attache case with a gun and 100 untraceable bullets. Though as the series unfolded we learned Agent Graves was doing this as part of a grander conspiracy. Through 100 issues, Azzarello and Risso earned mountains of awards and acclaim for this series

2 thoughts on “Vertigo: The Defining Comics”