Over there long and storied history Marvel Comics has made interesting attempts to branch out and try something different. In doing so they have launched different publishing lines to shake things up, many of which have left a lasting legacy on the comic industry. Though they may no longer be around here are some of Marvel’s now extinct publishing lines. 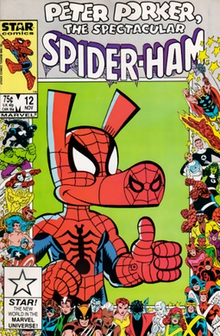 Star Comics: The 1980’s saw the age of comics readers begin to grow more mature, but Marvel decided to make a play to win over some younger readers, enter Star Comics. Focused on adapting pre-existing properties, Star Comics start comic readers off young. Amid the books featuring; the Muppets, Star Wars, and Transformers, the designated flagship book was Peter Porker: The Spectacular Spider-Ham. Strangely Star Comics put Marvel into competition with historic publisher Harvey Comics, who at one point sued Marvel citing Royal Roy as a blatant rip-off of Richie Rich. Though Star Comics ran it’s course and came to an end, but many of the original characters created for the imprint still pop-up in the mainstream Marvel Universe. Most recently Spider-Ham was even featured in the Academy Award winning Spider-Man: Into the Spider-verse. 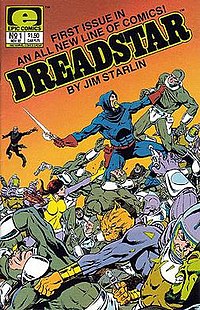 Epic: A publishing line which would test the waters for what eventually come with DC’s Vertigo and Marvel MAX with comics aimed at a more mature audience. The brainchild of famed editor-in-chief Jim Shooter, Epic, not only gave top tier creators freedom but also allowed them to own the rights to what they created. The line featured a wide variety of styles from the fantastical Elfquest to the satirical Marshal Law and even some touches of superheroes like Frank Miller/Bill Sienkiewicz’s acclaimed Elektra: Assassin. In the late 80’s Epic wowed comic fans by importing acclaimed comic works from overseas, most notably the graphic novel Airtight Garage and the epic manga classic Akira. While it never reached blockbuster sales, Epic wowed critics. Unfortunately that could not save the publishing line as the comic bubble of the 90’s began to swell and prepared to burst, forcing Marvel to shut the imprint down. In 2003, Marvel attempted to give new life to Epic as a line meant to showcase brand new creators trying to get their name out there. However the flagship book of this newly revived Epic was Mark Millar’s controversial pseudo-Spider-Man story Trouble which did little to endear itself to audiences. 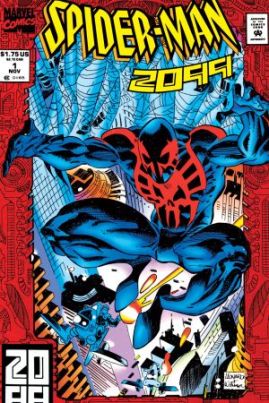 2099: If there’s one thing comic creators love, it’s a dark gritty apocalyptic future. Concocted in part by John Byrne and Stan Lee himself, Marvel 2099 launched in 1992with four titles, three were futuristic takes on classic characters like Spider-Man and Doctor Doom, but the fourth Ravage 2099 was a brand new creation from Lee himself. The 2099 imprint hit right when the comics bubble was growing and more titles were consistently being added. The editor of the publishing line Joey Cavalieri actually did an excellent job attracting talent bringing in the likes of; Peter David, Grant Morrison, Mark Millar, and Warren Ellis. 1998 saw all of the 2099 characters condensed into the short lived 2099: World of Tomorrow before being cancelled altogether. The 2099 comics still hold a place in the hearts of fans as the characters from this timeline have even made sporadic appearances since then. 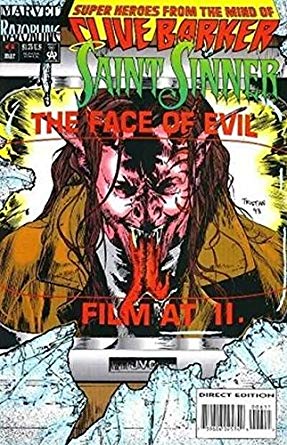 Razorline: With this publishing line, Marvel collaborated with horror legend Clive Barker to create four dark fantasy/horror superhero titles. Barker developed the ideas for the books and from there other creators picked up the ball and ran with it. Unfortunately none of them lasted longer than two years as Razorline came to an end in 1995. Despite it’s short run the flagship title Ecktoid has proved influential as writing duos; the Wachowski’s and the team of Dan Abnett & Andy Lanning both did work some of their earliest works on this title. Another four titles were planned and scripted but nothing ever came of them. In 2002 Clive Barker used the title of the Razorline comic Saint Sinner for another project which bore no relation to the book of the same name. Barker noted that simply because the comic ended it did not mean he had to “waste a good title”.

Malibu Comics: At the height of the 90’s comics boom, Marvel purchased California-based publisher Malibu Comics. Malibu mainly focused on licensed properties like; Planet of the Apes and Robotech as well as purchasing the critically acclaimed Men in Black. Easily their biggest success came from their Ultraverse line of comics, where a number of top creators were able to create their own superhero universe. What set the Ultraverse apart from other superhero books at the time was the presentation as they printed on high quality paper and utilized then-revolutionary digital coloring. The digital coloring was what caught Marvel’s attention as they bought out Malibu in 1996. Half-hearted attempts were made to do something with the Ultraverse characters, even having them crossover with established Marvel characters but ultimately it led nowhere. 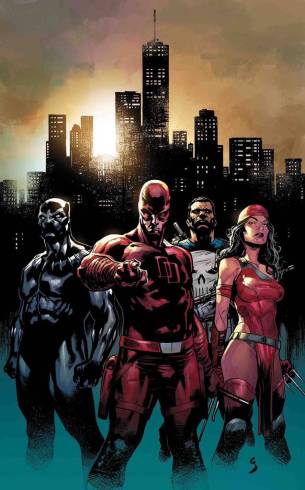 Marvel Knights: As Marvel Comics navigated through the choppy waters of bankruptcy, they came up with the idea of leasing out their lowest selling titles to the then unknown Joe Quesada and Jimmy Palmiotti. The two creators set out to completely reinvigorate these titles, by attracting top tier talents, from the indie scene as well as a few icons of the industry, and giving them ample creative freedom. Books formerly on the brink of cancellation like; Daredevil, Inhumans, and Black Panther transformed into critically lauded successes for their more serious takes on the characters. When Quesada ascended the corporate ladder as Marvel’s editor-in-chief, he folded his Marvel Knights comics into the mainstream Marvel Universe and brought even more books into the line. Over time, Marvel Knights transformed as the ongoing books were shifted away and it became an imprint for prestige mini-series’. Recently superstar writer Donny Cates announced his intention to reinvigorate this influential comics line. For more on the Marvel Knights line check out my retrospective HERE. 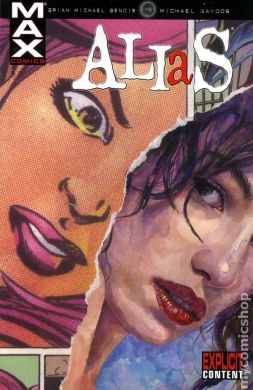 Marvel MAX: In the 1990’s through the 2000’s the publishers Distinguished Competition found great deals of success with their imprint Vertigo. These were comics intended for more mature readers, and garnered critical acclaim and blockbuster sales on the trade market beyond the usual comic audience. In 2001 Marvel decided to take their own stab at it with their own adult-oriented line Marvel MAX. The flagship book was undoubtedly the Brian Michael Bendis/Michael Gaydos series Alias which introduced readers to a certain private eye named Jessica Jones. Freedom from censorship truly benefitted the creators behind books like; Howard the Duck, Cage, Punisher, and Blade. MAX also courted controversy when it reintroduced the old Western hero the Rawhide Kid, turning him homosexual (to the point of parody) in the process. While the imprint had it’s fair share of critics it won over a good number of fans as well and was largely responsible for reinvigorating a number of classic Marvel characters. 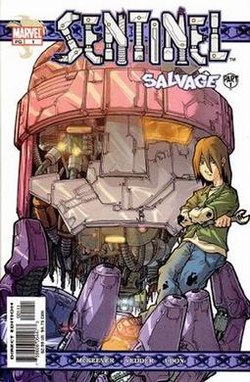 Tsunami: Manga publishers were seeing a boom in the United States market with their books during the 2000’s, and the House of ideas decided they wanted their own piece of the Japanese-inspired pie. The result proved to be a mixed bag readers saw everything from the truly manga-inspired Wolverine: Snikt! to the espionage-laden Mystique which featured little influence from the Japanese comic style. Hands down the biggest success of Tsunami came from Brian K. Vaughn and Adrian Alphona’s teen-centric Runaways, which continued on even after the imprint came to a close and has even received a television series. The entire publishing line proved to be a series of hits and misses; which gave readers great work like the cult favorite Sentinel and Daniel Way’s Venom while also delivering lows like Human Torch. 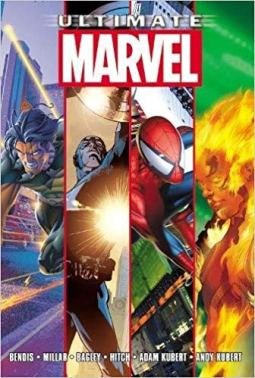 Ultimate Universe: It truly started with the best of intention, with the success of their early cinematic output Marvel recognized the opening to bring new readers to comics. The problem was your average person off the street was familiar with the decades of lore needed to understand what was going on. To remedy this the House of Ideas gave some of their most gifted creators like; Brian Michael Bendis, Mark Millar, Bryan Hitch, and Mark Bagley the Ultimate line. They were tasked with taking Marvel staple characters and rebooting them for a new modern audience. Bendis and Bagley launched things with Ultimate Spider-Man which was an instant smash critically and commercially. This was followed by Ultimate X-Men and the controversial take on the Avengers the Ultimates. Though it was not long before the Ultimate universe became a convoluted mess and the edgy and “modern” takes on these characters dated the books. The line was ultimately wiped out in 2015’s Secret Wars, but the breakout star of the Ultimate line, Miles Morales AKA Spider-Man is still swinging high.