The next hit movie from Marvel Studios is on the way in the form of Black Panther which will no doubt continue the massive success of the studio. Based on the first black superhero in Marvel history, the film directed by Ryan Coogler features Chadwick Boseman as the Black Panther along with an all-star cast around him. Ever since his cinematic debut in Captain America: Civil War, the fanbase for the King of Wakanda has only grown, and hopefully these new fans head to their local comic shop to read up on this superhero. Delving into the world of a superhero can be a daunting task, so here are the story arcs which are essential to getting to know the Black Panther.

Rich Buckler, Billy Graham, Jack Kirby, Gil Kane, Keith Pollard (A): This collection of stories is where it all started. Most notably is Stan Lee and Jack Kirby’s Fantastic Four #52-53, which first introduces the king of the highly advanced and secretive nation of Wakanda. From there, Don McGregor takes Black Panther on his own solo adventures in the Marvel Universe. Not only does this run form the bedrock for Black Panther’s world but also sees the hero go off on globetrotting adventures. 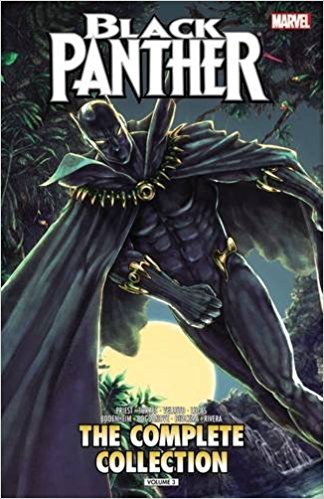 various (A): In the 1990’s nobody would argue that Christopher Priest was the definitive Black Panther writer, and now his entire legendary run on the series is collected into four volumes, with a number of famed illustrators such as: Joe Quesada, Amanda Conner, Norm Breyfogle, and more. From the streets of New York City to the throne room of Wakanda, there is no aspect of T’Challa’s life left untouched by Priest. New fans looking forward to the upcoming movie can get their first introductions to government agent Everett K. Ross and one of Panther’s greatest foes Killmonger, who both promise to play a major part in the flick. The Milestone Media co-founder infused his run with; political thrills, social commentary, and a wry sense of humor to ensure there was something for everybody.

John Romita Jr. (A): In 2005 filmmaker Reginald Hudlin took the writing reigns on Black Panther and was responsible for shaking things up for the Wakandan ruler. From marrying Storm, to leading the Fantastic Four, and even having his own animated series for a spell, it all started here. This blockbuster story sees, Panther’s arch nemesis Klaw assemble an army to wage war on Wakanda. Despite the grand scope of this arc, Hudlin and artist John Romita Jr. are sure to amp up the stakes between Black Panther and Klaw, making this one of the most personal confrontations between these two enemies.

Olivier Coipel (A): Now that he is one of the head honchos at DC, people forget that Geoff Johns waded into the Marvel waters for a story arc in the Avengers. Despite “Red Zone” featuring the entirety of the Earth’s Mightiest Heroes, Johns takes the time to focus on and explore the mindset of each team member during this crisis. This includes long time member, Black Panther. As the rest of them team is on the ground dealing with the biological weapon the Red Skull has unleashed, Panther and Iron Man are working to find a cure to the horrible effects of the attack. The exchanges between two of the most powerful and intelligent people in the Marvel Universe are one of the highlights of the book. Johns delves into the reasons why T’Challa, the king of his own nation, collaborates with a team of American heroes and where he sees himself in the landscape of everything.

Black Panther: A Nation Under our Feet Ta-Nehisi Coates

Brian Stelfreeze, Chris Sprouse,  (A): With the introduction of Black Panther to an entirely new audience through film and television, Marvel wisely knew they had to bring in their A-game in relaunching the hero for a new generation. Ta-Nehisi Coates, a renowned author and scholar, was brought in along with veteran artists Brian Stelfreeze and Chris Sprouse to bring these new fans an interpretation of the Black Panther they could call their own. In this arc, a new terrorist organization named the People are waging a campaign against Wakanda. In addition to this threat, T’Challa is facing upheaval from his own people, many of whom are questioning if he is fit to rule them. This three volume story arc has boldly torn the legendary hero to his core to see what he is truly made of, especially when things are never the same again.

Paul Renaud (A): This ongoing series which debuted in January is the perfect starting ground for those looking to learn about this character. Rise of the Black Panther promises to follow the life of T’Challa from his boyhood as the son of a king to his accepting of the mantle. The writing team of Coates and Narcisse have promised to use this series to further explore the history of the mysterious nation he calls home, which will surely be a treat for readers.

Alitha E. Martinez &Roberto Poggi (A): So much about the Black Panther mythos revolves around his homeland of Wakanda. In this story, now collected in trade, we see the story unfold through the eyes of Wakanda’s elite female warriors the Dora Milaje. This series explores this mysterious African nation’s cultural make-up like no other comic before or since. World of Wakanda serves as a spin-off to writer Ta-Nehisi Coates’ critically acclaimed run on the regular Black Panther series, so seeing his overarching story unfold from a second set of characters is a treat in of itself.