Ranking the MCU: ‘The Avengers’

Nobody thought they could do it, that the narrative and production logistics themselves were complex beyond reason. Nothing like it had been attempted before, nor successfully since. 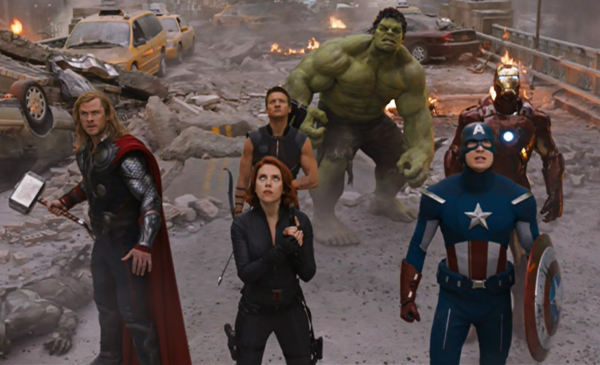 Villains: Loki (Tom Hiddleson), The Other (Alexis Denisof), a bunch of Chitauri.

Cameos: Stan Lee, keeping a watch on his kingdom, plays a sceptic. Renown Polish director Jerzy Skolimowski appears as the target of Black Widow’s interrogation in her first scene. Cult actors Powers Boothe and Jenny Agutter are on the Security Council, while Harry Dean Stanton plays the janitor who encounters Hulk. The actor who played Agent Sousa in Agent Carter, Enver Gjokaj, plays a police officer. Arch-villain of the franchise, Thanos, makes his first on-screen appearance played by Damion Poitier. Poitier is a stuntman by trade and later appears as one of Crossbones’ henchmen in Civil War.

Plot: Loki has survived his fall into the void and struck a deal with the mad titan Thanos, one of the most feared beings in the universe. Thanos equips Loki with a mind-controlling spectre and an army of alien warriors called the Chitauri with which he plans to conquer Earth. After Loki appears in a SHIELD installation to steal the Tesseract, Fury unites a team of heroes to stop his invasion.

Review: Although details of his personal behaviour has soured our perception of Joss Whedon of late, he really was the right person for the job. Not only is Whedon deeply entrenched in nerd culture he has demonstrated an uncanny ability to cut between action, drama and comedy within a single scene. He’s also adept at fleshing out a large cast of characters without sacrificing pace or story. He doesn’t manage this trick every time, but this is one of the best examples of his approach.

Whilst the previous films have built their story around the origins and conflicts of single character, this is very much an ensemble piece. Some of the characters – Fury, Iron Man, Captain America and Thor – we’re well familiar with. Hulk is reintroduced and has a very different feel to him. Black Widow and Hawkeye have appeared in previous films but at this stage we know little about them. Widow we’ve only seen as a cool fighting spy but through dialogue and her relationship with Hawkeye we learn about her background and motivations for working with SHIELD, setting her up as one of the most interesting characters in the series. We see Hawkeye in action for the first time, which is cool and all, but we know nothing about his character at the end of it all. He’ll always feel one step behind the group as a result. We also get Maria Hill introduced, but they act like she was always there and she fits in nicely with Fury and Coulson.

The big switch comes in the form of the Hulk. Edward Norton initially voiced his interest in reprising the role and it’s unclear why he has not appeared. Reports suggest it was a salary demand that left him out of the project, whilst producer Kevin Feige stated it was due to the actor not meeting the ‘creativity and collaborative spirit of our other talented cast members’. Ouch. From an audience standpoint, however, we are much happier with Ruffalo and the direction he took the character as Norton never felt like the Bruce Banner fans were familiar with. The single shot of Banner standing nervously on the deck of the helicarrier convinces us that they’ve got a handle on the character this time around, and his scenes working with Tony Stark are pitch-perfect.

Pitch-perfect is the way to describe this film. As we’ve already seen in the stand-alone origin stories the casting and portrayals of these characters is incredibly well handled, staying very, very close to their comic book originals. It’s astounding that film-makers would mess around with comic book adaptations as much as they did previous to the MCU. Many of these characters have been around for two or more generations of writers, artists and readers and during that time have been refined down to their key features and traits. The film-makers have been incredibly successful in tapping into these qualities and recognising what makes the characters appealing.

Viewers get a clear sense that the cast and crew were enjoying the hell out of this project. There’s a positive energy between everyone that seeps off the screen. Downey, Ruffalo, Evans, Hemsworth, Jackson, Johansson, Renner, Hiddleston, Gregg and Smulders make it feel so effortless when the scale of the production must have been incredibly taxing. It contributes to making it feel like a grounded adventure and not a fantastical, off the wall comic book.

It’s little wonder that this ambitious project sits comfortably in the Top 5 highest earning movies of all time and remains the most successful superhero movies of all time. It hits every note perfectly. It mostly uses established characters, including the villain, so we can get straight into their interactions with each other. It has action sequences that never get dull in spite of their long running time – they always make sure the stakes feel high. They inject comedy at the right moments to break up drama. It’s a complete package.

Credits Scene: Firstly we cut back to ‘The Other’, the mysterious alien who Loki has been working with through the film, and see that his shadowy master is Thanos. This sets up events that come to a head until the end of Phase 3 of the MCU. Sticking around longer during the credits we get a quiet moments of the Avengers, exhausted, eating shawarma.

Most Notable Easter Egg: When Thor and Loki first meet and are arguing atop of a mountain they are being circled by two ravens. In Norse mythology Odin has a pair of ravens named Huginn and Munnin who act as his spies, keeping an eye (cough) on the Nine Realms. This is a likely intended to be Odin keeping an eye on his sons.

Coolest Moment: The entire battle of New York is totally on point.

It’s fitting that the complete picture outranks the individual jigsaw pieces. It’s certainly the one that holds up best with repeat viewings.

Next: we’re taking a trip to the small screen.

24 thoughts on “Ranking the MCU: ‘The Avengers’”