Plot: Tony Stark is suffering from post-traumatic stress disorder following the events of The Avengers. At the same time the USA is under constant attack from an elusive terrorist leader called The Mandarin. As Stark looks into the attacks he finds links back to his own past.

Review: This one is…tricky to place. As a movie it is entertaining and funny, but as part of a larger universe it’s got some problems.

Let’s knock out the problems first. It’s been clearly established that Iron Man is linked to SHIELD and The Avengers, and that The Mandarin has been blowing up innocents all over America. SHIELD was established in the previous Iron Man movies, so it’s weird that they never step in, especially since Tony Stark challenges the villain to a fight. You’d think that Captain America might have some interest in responding to the crisis. Given this is the first film following the epic team-up of The Avengers it’s weird how isolated this story is, even after they’ve gone to great lengths to remove Stark from his normal haunts for the second act.

Then there’s some downright weird character decisions. Yes, it’s stupid of Stark to invite the Mandarin to attack him at home but it is in character for him. What’s stupid was how unprepared he was when it happened, the guy usually has a good plan. When the attack does come he doesn’t immediately launch the army of armours he has in his basement. Then, at the end of the movie, he blows up all his suits. How does this serve any purpose?

Putting that aside, this is a good continuation of Stark’s story. We’ve seen him at his peak and in this film we see him in a more vulnerable state. Some of the most exciting action in the film comes from Stark having to improvise his way through a gang of super-powered henchmen. Having to dig deep to work with an impressionable child works well for the character and retroactively works as a precursor to his relationship with Peter Parker.

Shane Black stepping up to direct means that we have much more comedy in the film, more than we remembered. Some of the gags are genuine laugh out loud moments, such as a henchman giving up because he hates working there anyway.

The twist that ‘The Mandarin’ isn’t really a foreign terrorist but a drug-addled actor working for a technology rival certainly rubbed many fans up the wrong way. We’re in two minds about it. On one hand it’s disappointing that we didn’t get the real deal, especially the way Ben Kingsley was portraying him. On the other hand it’s cool that the series keeps us on our toes and isn’t simply delivering the same stories we’re familiar with in a neat parcel. 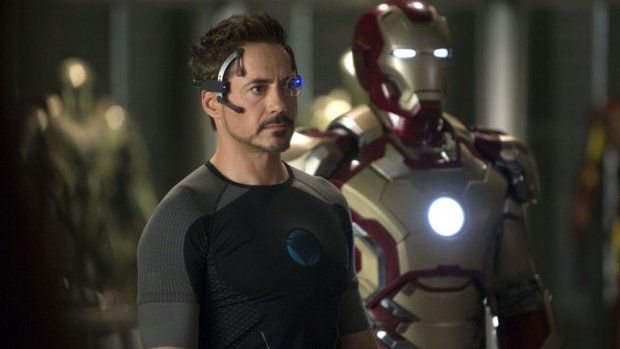 What the plot boils down to is Aldrich Killian, another scientist looking to create a super-soldier, helping veterans grow back their limbs and gain super-hot power. The plots fine, and it’s a switch from more robot suits, and the idea of ‘creating’ a villain is topical and well handled. But…because we spend so much of the movie chasing a red herring we never feel that Killian is a well established enemy with him left to evil monologue through the last act. Guy Pearce is a good actor and does the early scenes well, but he’s stuck chewing the scenery during key scenes.

This is a movie that has a whole mess of problems for those looking to nitpick (because what’s a popular franchise without someone trying to nitpick it to death), but a whole bunch of fun for those willing to put that stuff on the back burner. 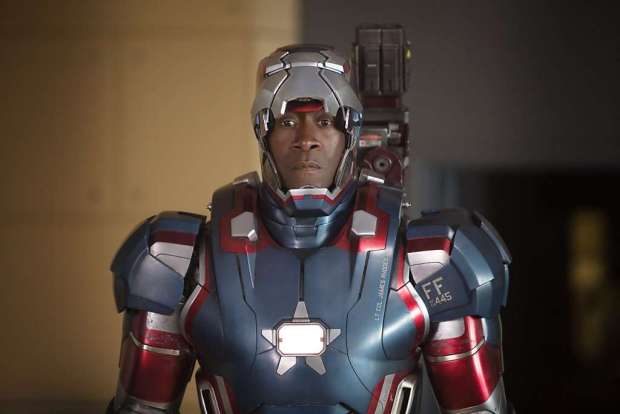 Credits Scene: It’s revealed that the voice-over from Stark during the film is actually him talking to Bruce Banner (Mark Ruffalo), who is struggling to stay awake and communicate to Tony that he’s not ‘that kind of doctor’.

Most Notable Easter Egg: There’s a number of cool things to pick up on in this film, but the real winner is Stark describing a bad tattoo of as ”Hispanic Scott Baio”. This is an extension of a joke from the film Kiss Kiss, Bang Bang, which also starred Robert Downey, Jr. and was directed by Shane Black.

Phase 2 Hand Loss: Ok, I’ll have to explain this. There’s a deliberate nod to The Empire Strikes Back during the second phase of the MCU films in that someone gets their arm chopped off, ala Luke Skywalker. The first victim is Aldrich Killian, who gets his arm lopped off by Tony during their final scrap.

Coolest Moment: When the full squad of suits shows up at the end and we get a full battle royale. Hats off the effects team for this one.

Iron Man 3 is hit and miss, but ultimately I really enjoy watching it. It’s very funny when it’s funny and it’s exciting when the action hits. The attack on Air Force One, the threatening videos from The Fake Mandarin, the huge step up in the effects – it’s not a bad film. It’s only let down by how isolated it feels at this point in the franchise.