We’ve got Iron Man, Hulk, Thor, Black Widow, Hawkeye and Nick Fury…there’s just one more hero who is heavily associated with The Avengers to collect.

Plot: At the height of World War 2 the United States military experiments with a serum to create a ‘super soldier’. The diminutive yet brave and honourable Steve Rogers is selected as the first candidate and is transformed into the powerful Captain America. On the other side of the conflict Johann Schmidt, a victim of the experiment gone wrong, has formed the evil organisation Hydra and is building a legion of troops carrying high-tech devastating weaponry.

Review: Captain America is going to be a tough sell in the modern market. Whilst there has been a push for US patriotism in the past two decades it still pales in comparison to the propaganda flooding the media market during the time of the World Wars. The Captain America comics are themselves a product of this system, being first published in 1941 and depicted as punching Adolf Hitler in the face on his first issue (which was almost titled ‘Super American’).

The fact that the character has endured past the war is itself remarkable, and it’s only through strong writing and his role in the cross-over series The Avengers that he has found a place among the modern comic landscape. His popularity has waned and improved over time, but he’s mostly hung in there. At this point it wouldn’t feel like The Avengers without him. Creating a movie is an additional challenge, as it would be remarkably easy for the whole affair to feel camp or cheesy.

I don’t think many people would have picked Chris Evans as the lead candidate for the job. He was best known for his goofy roles in movies like Not Another Teen Movie and the pretty boy in romcoms like The Nanny Dairies (paired with fellow Avenger Scarlet Johansson in an early career misstep). When he did feature in action movies he filled the role of comic relief, such as earlier comic adaptations Fantastic Four and The Losers (this time alongside future team-mate Gamora, Zoe Saldana). Evans himself reportedly turned down the role three times, citing a fear of what impact it would have on his career. Despite reservations from myself and other members of the fandom Evans proved to be the lynchpin of the movie, perfectly embodying the noble and caring persona as well as the intimidating strength of the figure. He has a wry sense of humour that disarms the flag-waving hero of the battlefield in just the right way. He’s genuinely inspiring for all the reasons Captain America should be, which is no mean feat. Amid the dozens of actors playing superheroes in this day and age I believe that Chris Evans works the hardest in bringing the character to life and that he really believes in the character’s values.

Plus we have Agent Peggy Carter playing support, and she’s a brilliant character who fortunately got her own series. Hayley Atwell has given us one of the strongest, coolest female characters we’ve ever seen in an action film.

After these two key characters the rest of the casting feels…obvious. Tommy Lee Jones plays a grizzled army leader who puts his faith in the traditional ways of doing things, a role he’s essentially typecast as. Hugo Weaving has played a dozen roles like Red Skull before – smart, powerful and frightening. Toby Jones as his nervous sidekick is in his element. All of these actors are brilliant in the roles but none of them feel like they’re being challenged by the work.

Out of all the Phase 1 MCU films this one seems to pack in the most information. While Iron Man had a smaller cast and was more character drive, Thor and Hulk arrived with their characters already super-powered. Captain America has to establish the setting and the characters before they can pump Rogers full of ‘roids. Then they’ve got to set him up as a public character and hero, his rivalry with an underused Red Skull and the narrative conflict. As a result some of the story is heavily condensed down and some characters, such as The Howling Commandos, are only included to provide lip service to stables of the comic. 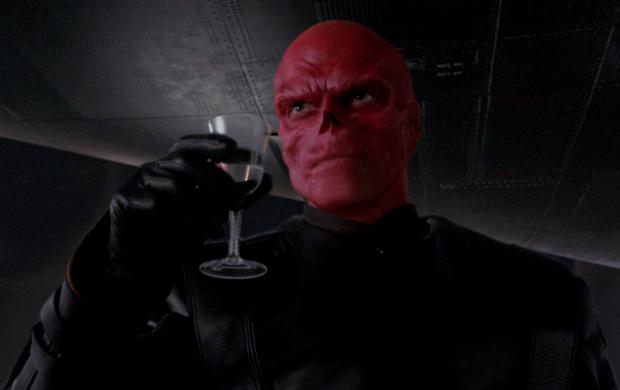 It’s hard to know what should be cut. The friendship with Bucky takes up a large chunk of the first act, but is essential for setting up The Winter Soldier (Stan having signed a multi-film contract from the outset). The sequence of Rogers’ being used as a part of the US propaganda machine could be non-essential, but I enjoy seeing how this reference to how the character’s publishing history. It’s also a good way of giving his insane costume choice a realistic grounding.

The rushed tone does wind up reducing most of the actions scenes down to montages until the finale, and even then it’s hurried. We get a really great sense of Captain America as a character, but we’d have to wait for future films to really get a solid Cap action sequences. By the of it all we may not be thrilled but we do feel emotionally involved when Rogers sacrifices himself for the good of the world.

Also, side note, there’s some cool actors turning up in film with early roles for their careers. Jenna Coleman, who played Clara in Doctor Who, is Bucky’s date at the fair, Natalie Dormer is a Private who hits on Cap prior to becoming a Tyrell in Game of Thrones and Richard Armitage assassinates Erskine before leading his dwarven followers to the Lonely Mountain in The Hobbit.

Credits Scene: Sometimes the MCU takes the cheap route of jamming in a scene from another movie in production, and it’s never much fun. This time it’s Steve beating on a punch bag and being approached by Fury with a mission. Then there’s a teaser for The Avengers. Awesome at the time but looking back it’s a nothing moment.

Most Notable Easter Egg: During the scene where Steve and Bucky visit the future technology expo there’s a red suited individual in a glass tube. This is the original Human Torch, an android who can engulf himself in flames. This character was the cover star of ‘Marvel Comics’ # 1 and appeared in the first cross-over with Namor a few months later.

Being a packed origin story without memorable action sequences works against this film. It’s one of the only incidences of the MCU getting bogged down in setting up future events than telling the story in front of them.

Click those blue numbers if you want to see the reviews of the previous films.

← Casting Call: ‘Death on the Nile’
Farewell to Twelve: The Era of Peter Capaldi →

26 thoughts on “The MCU Ranked: ‘Captain America: The First Avenger’”