Cameos: None of note.

Plot: Black Bolt is the king of the Inhumans, a race of humans carrying alien DNA from generations past which grants them incredible powers. His kingdom is Attlian, located on Earth’s moon under a camouflage dome. Black Bolt’s brother, the unpowered Maximus, stages a coup during which the royal family flees to Earth to gather their strength and prepare a counter offensive.

Review: This show received a proper bollocking when it premiered, being viewed as the MCU’s first completely unsalvageable failure. Iron Fist was a clunker, but the character was retained for The Defenders and will get a second season under a new showrunner. Inhumans, on the other hand, was so badly received that it was not only cancelled but it was recently announced that it has been entirely retconned out of the Marvel Cinematic Universe.

Does it deserve this criticism?

The show’s opening – filmed in IMAX no less – is terrible. We’re in a jungle seeing a man with very, very unconvincing green skin and a girl getting chased by some army type dudes. Some of the basic shot placements are poorly thought out and the pacing it downright awkward. Random moments of slow-motion are peppered throughout but at times that follows no logical sense. They’re not moments of high tension or drama, they’re just random chunks of people running or something.

After this we cut to Medusa and Black Bolt having some sexy time in Attilan. We get our first look of the effects used for Medusa’s hair and whilst they’re unimpressive one has the admire the ambition of such a complex effect in a TV show (it’s worth noting here that it all gets cut off in the first episode and never appears again). Then we get a look a Attilan and is carries all the majesty and wonder of a concrete shell of a building still under construction. 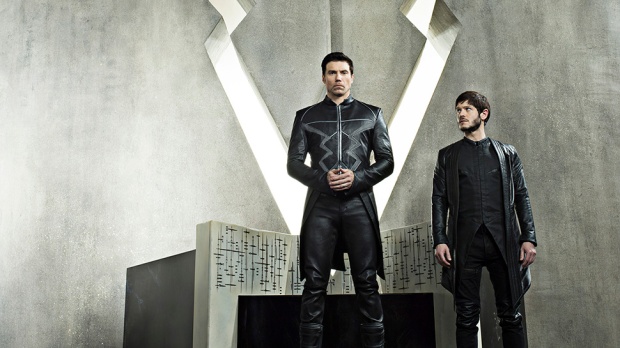 Ok, first major problem: everything looks shit. All of Attilan is made of concrete slabs. I haven’t delved much into the comics so we can’t comment of accuracy to the source material, but as a sci-fi setting it looks bloody awful. Some of the composition is based around weird horizontal slots in the concrete walls as though they’re trying to add some kind of artistry to it. The costumes all look as though they’re made from cheap plastic and must feel horribly uncomfortable. Whilst the effects for Lockjaw look good everything else looks like garbage, possibly the reason why they chopped off Medusa’s hair.

Yeah…that’s a sticking point. It’s a character who is known for having an enormous mane of prehensile hair and they chop it all off in the first episode. Medusa, with the power of prehensile hair, doesn’t have hair in this adaptation. What was the thought process on that?

The final insult of the visuals is the opening sequence. Was it rendered on an Atari Jaguar?

On par with the visuals is the acting. I don’t put much of the fault at the feet of the performers themselves, there’s only so much you can do with the material and we’ve seen some of them do good work in the past. The impression this show gives is that the actors were not given much direction. The delivery from scene to scene is inconsistent, at odds with what else is happening around them and stilted, as though it is unrehearsed.

Let’s take for example Crystal’s opening scene. She’s standing in an open area of Attilan calling Lockjaw. A group of people pass her and bow, acknowledging her as a princess. How does she feel about it? Pleased, proud, embarrassed, entitled, humbled? No clue, her response provides no information about the relationship between this princess and her subjects. The scene looks like they’re just working through the script and storyboard without considering the motives of the characters of the place of this scene in the larger narrative. Then Lockjaw comes running over, and yes, looks great, and the background extras all look on in surprise and delight at what is obviously an unusual spectacle. Some appear to be seeing this creature for the first time.

Then we cut to the next shot of Crystal and Lockjaw walking past a group of people and none of them even so much as glance at them. Not one of them even slightly acknowledges the fact that their princess is walking past with a giant dog. Given the reaction they got mere seconds ago you’d think their presence would be interesting to people. Then Lockjaw magically teleports them both away and no-one even blinks. They don’t even respond at all to this.

This is a small snapshot but this level of inconsistency is prevalent through the entire series. Character’s emotions turn on a time, plot threads get dropped and never mentioned again and relationships between the characters can flip without notice.

Let’s look at what each character does upon arriving at Earth.

Black Bolt gets himself in trouble with the police because as well as being mute (his sonic powers prevent him from speaking without causing massive devastation) he’s potentially deaf and a complete idiot. He seems unaware of people speaking to him and can’t work out what the police want or a retailer wanting him to pay for clothes. He just stares blankly at anyone trying to speak with him or ignores them entirely. He’s supposed to be a wise and powerful ruler, right?

Anyway, he goes to jail and meets another Inhuman who breaks him out of jail. Then they go a research centre but they become suspicious and just…walk out? That’s about it. 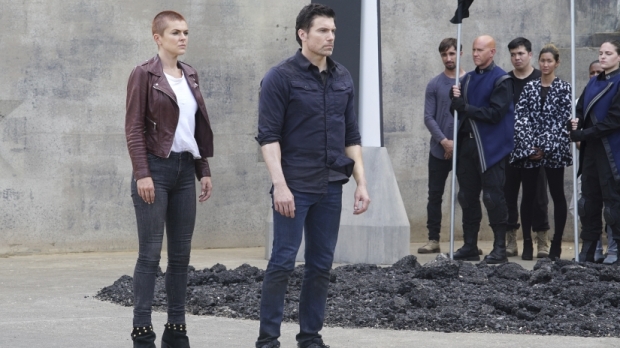 The newly shorn Medusa kicks around with a scientist named Louise. They can’t stand each other and then a moment later they’re best friends forever. She doesn’t do much else.

Karnak has the ability to ‘see the fault in all things’, a power that is nicely visualised by him testing different outcomes to his situation. He winds up on Earth, stumbles across a drug plantation, starts working for them, has sex with a woman named Jen, the leader of the plantation kills everyone, Karnak and Jen run away, then the leader’s leader turns up and kills him and then Karnak and Jen return (for reasons) and beats them up and then Jen decides to say good-bye to Karnak. For reasons.

Next we have Gorgon. He’s the cloven hoofed, earthquake causing soldier who is presented as genuinely stupid. He meets some surfers and decides that they’re now like a family to him. Then he dies, than undies. That’s about it.

The aforementioned Crystal and her elemental powers arrive on Earth later than everyone else, meets some surfer bro and they fall in love over the course of about 15 seconds. They’re main conflict comes from a crazy ex-girlfriend archetype.

The overarching narrative concerns Maximus staging a coup because those who don’t get cool powers get shunted down to the lower class and forced to slave away in the mines while the royal family live in luxury. If that sounds like a pretty gosh-darn good reason to overthrow a royal family then, yes, it is. They spend the remaining seven episodes turning Maximus into a cartoonishly ridiculous villain so cast the royal family as heroes by comparison. They do not succeed.

By the end of it all the royal family has reunited and fought back against Maximus with most of the heavy lifting being done by Triton, a character we knew nothing about and had barely seen up until this point. They win, and Black Bolt traps Maximus in a bunker with enough food and drink to last his entire life. Yay?

It’s impossible to get on side with these ‘heroes’. They keep a chunk of their population working in the mines because of the way they were born. It’s like a slavery allegory if we were expected to side with the slavers. They want to win back their throne fore petty reasons. They all act like entitled assholes throughout the series and finally Black Bolt subjects his brother to lifelong isolation. Fuck these guys, they’re all terrible.

Most Notable Easter Egg: None that I could spot.

Well, this is easy. Down to the bottom it goes. Click the titles if you want to see previous entries.

← Movie Review: Won’t You Be My Neighbor
Five Most Controversial Movies Ever →