Cameos: Rosario Dawson begins drawing together the threads of the Netflix MCU, reprising her role as Claire Temple. Stan Lee appears in a photograph in the police station.

Plot: Jessica Jones has super-strength and can leap incredible heights…but rather than donning spandex and joining The Avengers she alternates between drinking herself into a stupor and working as a private investigator. She’s haunted by her former lover Kilgrave, a man with the ability to control anyone he wants.

Daredevil raised the bar and this debut season clears it with room to spare. It is an incredibly well crafted story with brilliant characters, a distinct neo-noir style and the single most terrifying villain the MCU has conjured up. Jessica Jones draws on modern social issues, particularly the treatment of women, to build the most compelling and thought provoking entry into the franchise to date.

Jessica is a victim of severe abuse. As a young girl her parents were killed in a car accident, for which she carries the guilt, and she was taken in by the mother of teen star Trish Walker. In the following years Jessica discovers that Trish’s mother is emotionally and physically abusive towards her famous daughter, looking to increase her net worth, and Jessica uses her newfound powers to stand up to her. More recently she’s been a pawn of Kilgrave, an obsessive stalker who took complete control of her actions to his own end.

The series begins with Jessica burying her pain and PTSD under an ocean of whiskey and making a living as a private snoop. Although presumed dead, Kilgrave still lurks in the back of her mind and begins to reveal that he’s still alive and keeping an eye on her. From the depiction of Trish as a controlled child to Jessica’s sexual and emotional manipulation at the hands of Kilgrave we are subject to a wide spectrum of abuse against women which occurs day to day in our own world.

Krysten Ritter is fantastic as Jessica – absolutely perfect – but the real draw is David Tennant. He is as repulsive and horrifying as Kilgrave as he was charming and loveable as The Doctor. The real strength of the character is how closely they modelled his behaviour after the behaviour of abusive spouses and partners without leaning so heavily into the allegory that he becomes a cartoon villain. There’s layers of suability at work, from Kilgrave projecting his own preferences on to Jessica, making grand gestures to show ‘how much he cares’ and – in frequent, chilling moments – demanding that she ‘smile’ because he likes to see her happy. If you haven’t encountered some complete prick who goes around telling girls to ‘smile’ with some similar piss-weak justification then consider yourself lucky.

Kilgrave having the ability to manipulate people’s actions makes him a threat. His desire to control people makes him a monster. At its core many abusive relationships do amount to one person seeking to control another.

There’s a great support cast of characters, including Eka Darville as a strung out addict neighbour and Wil Traval as a drug induced and unhinged super soldier, they all work together to construct a dark, depressing world with no redemption or glory for the heroes. We also get the introduction of Luke Cage, played by Mike Colter, a long standing fan favourite. The man with indestructible skin makes for a great foil to Jessica, being as optimistic as she is pessimistic. Colter looks like Cage has walked straight off the page and on to the screen. At the time this was an exciting set up for the upcoming Luke Cage solo series. 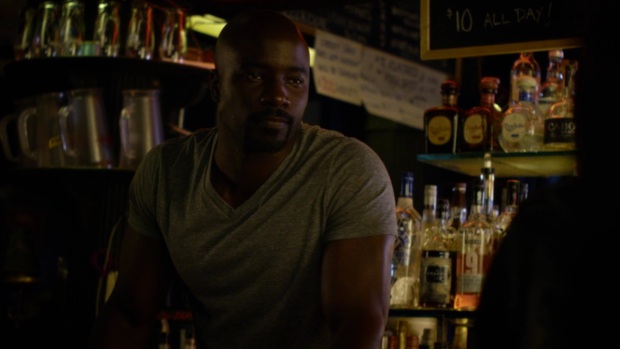 Amid all the fanboying we do have some minor complaints. They don’t quite manage to convince that Krysten Ritter can throw people through walls and it often seems as though the wires are doing all the work. One moment where Jones picks an unconscious Cage out of a hospital bed looks downright preposterous. There’s also the final move against Kilgrave. We were expecting something symbolic, such as his jaw being ripped off or his tongue being torn out, and a neck snap felt anticlimatic.

Between the powerhouse Krysten Ritter performance and the amazing, sickening David Tennant as the BEST villain in the MCU – yes, better than Loki – this is a show everyone should watch. With a double whiskey to wash it down.

Most Notable Easter Egg: Trish creating a tacky superhero costume for Jessica in a flashback is a nice nod to a costume and identity Jessica once used in the comics before packing it in for PI work.

Coolest Moment: Kilgrave appearing at the police station, showing us for the first time the extent of his powers and sadism.

A dark and gritty detective show is going to find it tough to compete with the blockbuster movies on pure entertainment value, but the brilliance of the show’s writing and it’s performances puts it up there in the top 5.

13. THE AVENGERS: AGE OF ULTRON

Next up…time to touch base with out favourite SHIELD agent!