Cameos: Stan Lee, naturally, as a bartender during Luis’ last story. John Slattery and Hayley Atwell return as Howard Stark and Peggy Carter respectively in the prologue. Comedian Garrett Morris, who played Ant-Man in a SNL routine appears as a taxi driver and YouTuber Anna Akana features in one of Luis’ stories towards the end of the film. And as always…see the end credits.

Plot: Scott Lang is released from prison after serving time for burglary. In spite of his attempts to go straight he gets recruited by former superhero Hank Pym to take up the mantle of Ant-Man and pull off a major heist.

Review: It’s at this point that it really, really feels like the MCU has got it’s formula down to tee. Even a lesser known character (to the general public, Hank Pym is obviously a major player in the Marvel Comics Universe) like Ant-Man will draw in the crowds. If the concept, taken at face value, is silly we can point to Guardians of the Galaxy to vouch for potential to make it work. Ant-Man may have been one of the original Avengers (alongside Hulk, Thor, Iron Man and The Wasp) but he doesn’t have much marketing power.

It is much publicised that Edgar Wright was on this project for a long time before parting ways with Marvel, with many speculating that his unique style clashed with the MCU aesthetic. Instead Peyton Reed took the helm seems to strike a balance between his own personal style and the MCU style guide. As a result we have a Marvel heist film with an oddball comedic bent.

Scott Lang is a burglar who is convinced to participate in a a job in order to get the groundwork to regain shared custody with his ridiculously adorable daughter. Putting a criminal alongside the God Thor, the noble Captain America and world changing intellects of Stark and Banner might seem like a misstep but they go to great lengths to make Lang a loveable rogue. The early scenes of Lang reconnecting with his friends, working at Baskin-Robbins and buying his daughter a malformed rabbit doll just makes him charming. 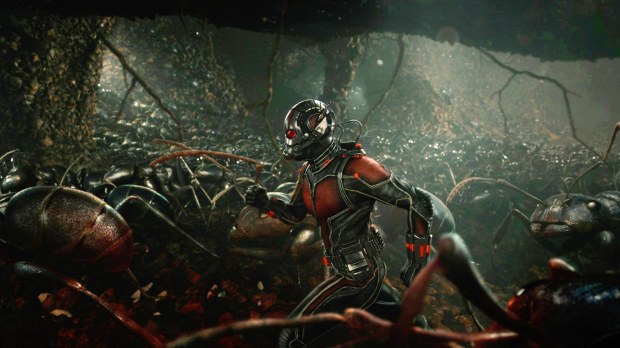 Hank Pym steps into the mentor role, being a former super-spy using his Ant-Man technology before turning his back on the government and SHIELD. Fleshing out the character of Pym is his estranged relationship with his daughter Hope. Hope is working with her father to spy on Darren Cross, who’s trying to recreate the Ant-Man technology. When Cross gets close to weaponising the tech Hope and Pym recruit Lang to conduct a heist mission. And having written it all out it’s a weirdly complex plot with many characters interacting, varied motivations and a full origin story.

Unfortunately the one aspect of the film given the short straw is the villain, Darren Cross. Corey Stoll is absolutely on point as a creepy CEO turned mad-man, but you can see what a common trope that is. There’s essentially no back story and no development for Cross aside from some throwaway lines about exposure the Pym Particles making people crazy without the special helmet. He doesn’t even participate in the action until he suits up as Yellowjacket in the final act. It’s a bit of a waste of a performance, because Stoll has some good moments. Delivery of the “Do I look like a monster” line is darn good. 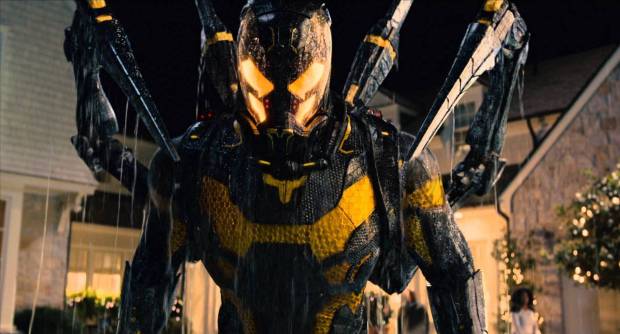 Worth mentioning is a short action sequence where Lang fights with Falcon. The increasing incidences of these cross-over cameos really sells the idea of a wider universe.

The action and special effects throughout the film is highly creative, taking every chance they get to drop Ant-Man into cool environments while miniaturised. We see him is a bathtub, running around on a turntable, being reflected in glass transparent shoes, running through ant nests, running through a model city, fighting in a briefcase with a phone and Lifesavers – it’s just tonnes of fun to watch. If there’s one issue we take it’s how much Lang relies on running in a straight line towards or away from bullets and hoping they miss him. Trying zig-zagging every once in a while, guy.

Although Ant-Man is a plenty fun movie it doesn’t stand as especially unique in the franchise. It’s a good way to round out the second phase though. If they’d put the Wasp in there things may have been different because, seriously, where’s the Wasp.

Credits Scene: Firstly we get the second Ant-Man solo movie set up with Hank revealing Lilly’s new Wasp outfit (why they didn’t include her in this film is confusing through). Later we see that Falcon has found the Winter Soldier (Sebastian Stan) and trapped him vice, and brought Captain America (Chris Evans) in to the situation.

Most Notable Easter Egg: Keep an eye on the right upper part of the screen when Ant-Man is going sub-atomic and you’ll see the silhouette of Wasp zoom past. Some people say it’s just a rumour, but it’s definitely there. Phase 2 Hand Loss: Rather than an arm being removed this one implodes. When Yellowjacket meets his demise it’s the first thing to go. And that’s the end of these Empire Strikes Back references.

It’s good…but there’s some steep competition in the top half.

12. THE AVENGERS: AGE OF ULTRON

Holy hell, that’s 20 entries! Before we get into Phase 3 we have a whole bunch of TV shows to work through. Get ready for SHIELD!