The comic book industry had an incredibly active 2017 to say the least. Despite going through struggles, Marvel still published some fantastic books, even if they were pushed by the wayside. Rebelling against conventional wisdom, DC has been able to maintain the momentum Rebirth gave them and are only getting better and better. Outside of the Big 2, other publishers were flourishing and finding audiences looking for something different. Image in particular continued to publish some of the most critically acclaimed books on the stands, and giving creators a chance to show what they can do. From ongoing series’, to mini-series to one shots; here are my picks for the best comics of 2017.

Batman (DC): Scott Snyder left gigantic shoes to fill in writing DC’s bestselling book, luckily Tom King was more than up to the challenge. Coming off of critically acclaimed books like; Vision and Omega Men, and Sheriff of Babylon, fans were abuzz of what he would do with a big A list character like the Dark Knight. With a rotating roster of incredibly gifted artists like; Mitch Gerads and Mikel Janin, King is composing something incredible. This year we saw a hidden chapter in Batman’s past with the “War of Jokes and Riddles” as a young Caped Crusader found himself and the civilians caught in a battle between his most dangerous foes with grave repercussions. But it was not all doom and gloom, as “Superfriends” was one of the best Superman/Batman team-ups in years. And of course, Batman’s relationship with Catwoman evolved in brand new ways which came to a head with a proposal.

Batman/Elmer Fudd (DC): Speaking of Tom King he collaborated this year with Lee Weeks to give fans a one shot which exceeded every expectation and was better than it had any right to be. Transforming the familiar Looney Tunes characters into dwellers of the underworld inhabiting a speakeasy, with Elmer Fudd as a cold blooded killer looking for revenge. King plays this completely straight and infuses the hunter with a speech problem with a pathos which immediately keeps readers on his side. Lee Weeks’ pencils create a perfect dark and shadowy noir setting for this team-up to take place in.

Ms. Marvel (Marvel): Time for me to get personal here, the opinions of everyone else aside, I can not express how much I love this series. From day one, Kamala Khan has been the Peter Parker of this generation, and under the writing of G. Willow Wilson, her book just keeps getting better. While the event, Civil War II was a bloated drag, for Ms. Marvel it became personal as it introduced a new member to her rogues gallery. On top of that, a racist blowhard politician took over Jersey City and made her public enemy number 1. Her personal life did not get any easier either, most notably her relationship with lifelong best friend Bruno seemed to come to a heartbreaking finish. But she may have a new love interest (or rival) in the form of Red Dagger who has taken up root in her hometown. With beautiful art and a character we care about in topical stories, Ms. Marvel is still one of the best comics being published.

Mister Miracle (DC): Batman is not the only character, Tom King proved he can write this year. Collaborating with Mitch Gerads, his new series Mister Miracle has taken the New God escape artist into trippy new territory. War is hitting New Genesis nad Mister Miracle and Big Barda are thrust into the battle to protect this world from Apokolips. While King’s story has readers hooked, Mitch Gerads is making sure it is one of the best looking books on the stands, with a style one does not usually see in these kinds of stories, which makes it all the better.

Redlands (Image): People who know me, know I love some good Southern Fried horror, which is why I am really digging the new Image series, Redlands. Jordie Bellaire and Vanesa R. Del Rey take readers into the swamps of South Florida where a trio of witches took over the town long ago and currently serve as the law enforcement in the community. They preside over a town full of; shape shifters, serial killers, and alligators; all beautifully and viscerally rendered from the art of Del Rey. This series gets more intriguing with each issue which bodes very well for its future.

The Mighty Thor (Marvel): Despite constantly being renumbered and rebranded and having new Thors added to the mix, Jason Aaron’s the Mighty Thor continues to be one of the best books of the shelf. The epic he began telling years ago, continues to grow in scope this year as the enemies of Asgard further their plot and creating chaos among the Ten Realms. Jane Foster continues to prove she is worthy to wield Mjolnir. But she is no longer alone, as the Odinson is making strides to regain his worth, and Volstagg gained a hammer of his own to become the War Thor. This year we have seen Thor battle; the gods of the Shi’ar Empire and the Phoenix, but her toughest battle has been against her own cancer. With the current arc entitled “the Death of the Mighty Thor” it seems as though the Goddess of Thunder is living on limited time, but with the way her series has been going, Thor will definitely go out with a loud bang. 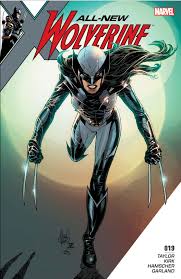 All New Wolverine (Marvel): 2017 has been a big year of Laura Kinney, the former X-23. She made her big screen debut in the critically acclaimed Logan and in the comics she has grown and cemented herself as a staple character in the Marvel Universe. Coming out the ResurrXion event, Tom Taylor and Leonard Kirk have moved this series into new ground and Wolverine has grown immensely as a character. The story arc “Immune” not only saw her gain a cool new costume, but had Laura Kinney coordinate other heroes to save a quarantined city. Taylor also introduced “sister” Gabby and pet wolverine (like an actual wolverine) Jonathan prove to be hilarious comic relief characters. Now that she has reunited with her “brother” Daken against the Orphans of X, 2018 looks to be another banner year for the woman who is the best at what she does.

Cave Carson Has a Cybernetic Eye (DC): When Gerard Way was given his own line at DC Comics entitled Young Animals, we knew something exciting was coming. Say what you will about his music, but books like Umbrella Academy shows he has a unique voice for the comic business which is reminiscent of the old school Vertigo style. All four books have been fantastic so it is hard to choose only one, but due to its unique concept I am going with Cave Carson has a Cybernetic Eye from Way, Jon Rivera and artist Michael Avon Oeming. Cave Carson and his family were once renowned pulp explorers venturing the world beneath the earth’s surface. But that was a long time ago, now Carson is a middle aged man; dealing with the death and the fact his daughter is heading off to college. When his famed cybernetic eye begins to act up, he and his friend Wild Dog and his daughter are reluctantly thrown back into the subterranean world he left behind. 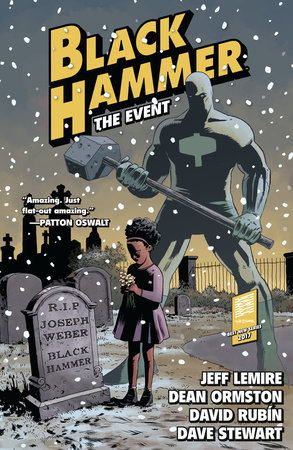 Black Hammer (Dark Horse): Jeff Lemire continues to prove himself a well spring of brilliant comic book ideas. With his Dark Horse series, Black Hammer, he and artist Dean Ormston bring a new twist to a classic superhero trope. Abraham Slam, Barbalien, Golden Gail, Colonel Weird, and Madame Dragonfly, perished in a battle to defend Spiral City, and the horrible fate is that they were erased from their continuity. Sure there is the element superhero fun, it is still a very poignant book which looks at family and aging with a very stark and believable eye. While Dean Ormston does not illustrate in a traditional “superhero” style it fits perfectly with the tone of this book, which serves perfectly as a love letter to the genre.

Saga (Image): Whenever the conversation of best comics comes up every year, people point out you will inevitably see Saga on their. There is a good reason for that in that Brian K. Vaughn and Fiona Staple are STILL crafting one of the best books on the shelves right now. Our once star crossed lovers now find themselves firmly in the position as parents to young Hazel and often playing the adults to the others on their ship. This year began with the grand “War of Phang” but ended with an emotional gut punch (because that is what Saga does best of course). When Alana ends up pregnant once again, which forces her and Marko to make tough decisions about their future. Saga continues to be; funny, romantic, and heartbreaking as it continues to be one of the best comics being published right now. 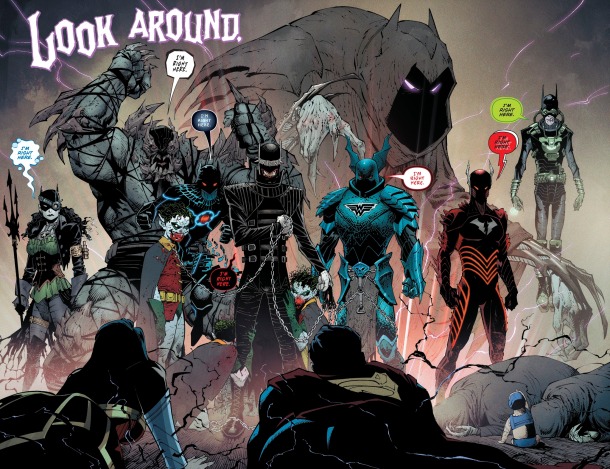 Dark Nights Metal (DC): Scott Snyder and Greg Capullo have made themselves arguably the definitive Batman team of this era. This year they returned to the character for their magnum opus, Dark Knights Metal, a big and epic story which hits the entire DC Universe hard. It avoids the “event fatigue” so many readers are feeling nowadays by being completely different from anything else in mainstream comics. In an dark version of the DC Multiverse, the evil Batmen from that plane of existence have invaded the world of Batman and his allies and the Caped Crusader has been thrust into limbo. While Snyder is coming up with crazy ideas for this series, Greg Capullo is doing the best work of his career bringing it to life. Everything from superheroes taking refuge in a bar to the members of the Justice League battling on Warworld in mech suits, no idea has been too crazy or grand that he can not make it look fantastic.

God Country (Image): 2017 has been a great year for writer Donny Cates, he is currently kicking butt on Doctor Strange in his first mainstream comic gig. But the indie book that got him noticed came out this summer, God Country. You can read my full review of the comic HERE, and it is one of the most imaginative books of the year. In a small Texas town, elderly senile Emmett stumbles across a magical sword which transforms him into a god. Of course the family of deities who lost this weapon come looking for him, and his family is put into danger, forcing Emmett to wield his new sword to defend his loved ones. Sure this is a Jack Kirby-esque grand epic, with pitch perfect artwork from Geoff Shaw, but at its core God Country is an emotional tale of a man trying to grasp onto what is left of his mind to truly show those he loves what they mean to him.

Black Panther (Marvel): With the cinematic hype for the Black Panther reaching fever pitch, Marvel has continued to ensure fans have the best Black Panther comic possible. From MacArthur Foundation Genius Ta-Nehisi Coates, Chris Sprouse, and veteran artist Brian Stelfreeze have ensured T-Challa held a prominent place in the Marvel Universe. With the nation of Wakanda deciding they no longer needed a king, one of Panther’s defining elements is now gone, forcing him to truly discover who he is. In “Avengers of the New World” the Wakandan hero finds himself looking to spirituality to decide his next course in life. Recently they “Klaw Stands Supreme” arc kicked off which has reintroduced one of Black Panther’s greatest enemies to the fold. Not only does the hero have to contend with this foe, but it seems his nation is falling apart right under his feet as well.