The Scene: The arrival has Blanche DuBois (Vivien Leigh) to the Kowalski household has brought with it no shortage of conflict in this adaptation of one of Tennessee Williams’ best works. The manic woman could not be more of an opposite to the misogynistic bully her sister Stella married in Stanley Kowalski. On this night, while Stanley and his pals are playing cards Blanche’s advances on his friend Mitch, sends the drunken man into an absolute rage. Seeking refuge, Stella and Blanche turn to their upstairs neighbor while the aggressive 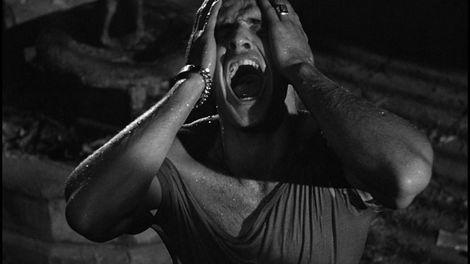 Stanley (Marlon Brando) continues his rampage. Inevitably he comes down though he is now a sweat-soaked mess in torn clothes. Realizing he drove Stella away, a remorseful (and still inebriated) Stanley stumbles outside and looks to the upstairs apartment and begins crying out for her with a loud “Stella! Stella!”. Despite the protests of her sister, Stella caves in and walks down to rejoin her husband. He scoops his wife up and begins to carry her off but Blanche makes a passionate plea to her sister pointing out that Stanley will just continue to be a drunken abusive monster and that she has to leave him. Stanley tells his troubled sister-in-in no uncertain terms, that Stella will never leave him.

The Deconstruction: One of Tennessee Williams’ calling cards as a playwright was his ability to create deeply rich and human characters. True Stanley Kowalski may be a loathsome misogynistic bully, but he also has elements which keep him from being a completely one dimensional villain. One can not deny that in his own mind he absolutely adores Stella and would do anything for her. In this singular scene, viewers get to see the entire spectrum of Stanley’s personality all played masterfully by the great Marlon Brando. Many actors who worked with him over the years claimed director Elia Kazan had the ability to draw out there best performances. When those performers are already as talented as Marlon Brando and Vivien Leigh I am sure half is work was already done. Your heart inevitably breaks as you watch Blanche try to talk sense into her poor sister who is too far in to see a way out. True to the source material Leigh has played Blanche DuBois as insecure and panicky after a difficult few years, but here we see her actually take a tough stance against her brother-in-law. Throughout the entirety of a Streetcar Named Desire, this is the closest she ever comes to breaking Stanley’s hold over Stella. Rough and pugnacious but vulnerable characters are definitely in Brando’s wheelhouse, and few may have had the vision to cast the tenacious Leigh as the flighty Blanche, but she nails the role to perfection.

Best Bit: Stanley’s anguished crying for Stella. Brando is such a gifted actor that for a brief moment we quit hating this loathsome character and feel a certain for him.

← Criterion of the Month: ‘Night of the Living Dead’
Classic Scene: Dracula’s Castle →