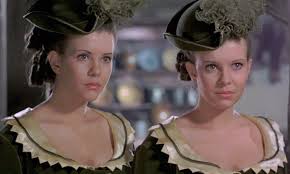 After being oprhaned, Maria and Frieda Gellhorn are sent to live with their Uncle Gustav Weill. Weill is a man who enjoys two things: being pious and burning “witches”. Standing in direct opposition to Weill is the vampiric Satan-worshiper Count Karnstein. While Maria falls for the dashing local choirmaster, Frieda finds herself seduced by Karnstein’s evil. Despite Weill’s attempts at keeping the twins in his iron grasp, Frieda is drawn further into the Count’s evil despite Maria’s protests. When the fanatical uncle discovers the truth, both twins may have to suffer.

Through the various Dracula sequels, Hammer had found success in combining the vampire and occult genres. Unfortunately Twins of Evil takes these elements into

extreme stereotypical directions that it becomes hamfisted. While the tone of this flick may start somber and subtle, things become increasingly campier and sillier as the story unfolds. In all honesty this descent into silliness is quite entertaining to make up for the dipping quality. Nothing beats the sheer joy of watching the heroic choirmaster galvanize Gustav’s followers or when the Count discovers that the townspeople are coming to stake him.

In one of their few film roles, real life twins Mary and Madeleine Collinson acquit themselves well enough. Granted they got their roles due to their work in Playboy but they do have a strong screen presence. Given that Hammer dubbed over their thick

Maltese accents, the fact that the sisters know how to present themselves onscreen goes a long way. Naturally Peter Cushing kills it as the fanatical Uncle Gustav, the thespian truly carries himself with a sense of authority which truly inspires fear in those around him. Unfortunately as Count Karnstein, actor Damien Thomas begins the film as a delightfully sinister character who oozes evil, but sadly as the film progresses he turns into a standard Saturday-morning cartoon type evildoer.

For fans of the Hammer House of Horrors, Twins of Evil is truly a movie which can not be missed. It has all the hallmarks of the studio that genre fans have grown to love. While the quality of the film takes a downward dip towards the third act it is still solid and well worth a watch.