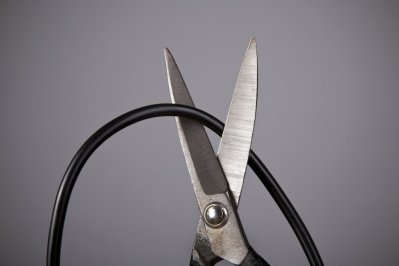 guessed. Ever since I was a nerdy young lad, I have dug on cable TV because it always provided a diversity of programming (for the most part) all within a few button presses of each other. For the past few years our cable bill kept increasing little by little and my wife who’s intellect far surpasses my own, kept bringing up the idea that we should ditch it and make the switch to all streaming. I would brush this off with a smug and dismissive French wave replying that cable provides everything I watch in one place and not scattered across a million different services. This was until the criminal syndicate at Comcast decided to take away ID Discovery, and as a true crime junkie that one hurt. But it was not until recently they delivered the decisive blow. I was watching an old gangster movie on my beloved Turner Classic, the channel my TV is on about 75% of the time, only this time the picture cut out. “That’s odd…and annoying” I thought in my brain, figuring it was some kind of normal issue which would sort itself out in a few hours. But when the problem persisted the next day I finally called the caring and helpful Comcast customer service. I was informed by the jackball on the phone that my Turner Classic was being held hostage and to see it returned it would cost an extra $10 a month….every month….and it would include a bunch of other channels I did not want to just clog the TV menu. The time had inevitably come for me to join the 21st century and cut the black corded entity who had been connected to by TV since I was a nerdy lad. I also found out this process involved no actual cutting, but I was still onboard.

From there I delved into the world of streaming to figure out what I needed to get. This is mainly why I thought to write this rambling piece, because I know there are plenty of you reading this (of maybe not) saying “But Mr. Josh, how do I get rid of cable? And what do I do next? Are you really so stunningly handsome Chris Pine AND Chris Evans come to you for advice?” The answer to that last question is “not yet”.  Like between 60-90 million other Americans I had Netflix. And because of our use of Amazon the web site we also had Amazon the Prime too, which has a killer movie selection if anyone has ever gotten the chance to explore it. But since Netflix changed the game in 2010, approximately 834,378,209 other companies have jumped into the streaming game. This meant all the things I like to watch are scattered throughout the interwebs like digitized horcruxes. I had to find out which services to subscribe to in order to get them back.

First and foremost, I needed to get back Turner Classic and searched through the various

streaming TV services before narrowing down between Sling and Hulu Live. The tiebreaker came down to Hulu Live having Fox Sports, so I could keep up with the Memphis Grizzlies and Atlanta United, as well as the Smithsonian Channel. As you may have guessed about 90% of my TV time consists of; old movies, sports, and documentaries, because I am a wild and crazy party-hard kinda guy. Many people have reported issues with Hulu Live, but personally my problems have been few and far between and some of them originated from me not knowing what I was doing. I was pleasantly surprised to find that Hulu Live not only included Turner Classic, but the East Coast AND West Coast feeds of the channel!! I do not know why this excites me so much, but it does. I could once again enjoy such landmark films as; the Bride of Frankenstein, Casablanca, the Sweet Smell of Success, the Wizard of Oz, Best Years of Our Lives, and Lady Snowblood. Once more I can fill my Friday nights with TCM Underground and my Saturday nights with Noir Alley.

But man can not live on classic movies alone (or so others have told me) so diversity was needed. Thanks to my favorite radio show host turned podcaster Phil Hendrie I had been hearing groovy ads for a streaming service called Pluto TV that he proclaimed was free.

Naturally I was skeptical but eventually got curious to see just how free this streaming service is. Needless to say I was shocked to discover Pluto TV was in fact free with a host of strange specialty channels for whatever your taste; sports, British TV, true crime, the paranormal, or whatever floats your boat. They even a channel which shows nothing but Unsolved Mysteries and another which shows classic Doctor Who. Their movie selection was great too with channels devoted to horror films, grindhouse flicks, and MST3K episodes.

To truly fill my TV watching dance card my wife (the one who’s intellect and beauty far surpasses my own who I mentioned earlier) gifted me with 3 years of Disney+ for my birthday. With the doors of the hallowed Disney Vault opened on my TV screen along with movies and shows from; Marvel, Pixar, Lucasfilm, and National Geographic to with it, I will have plenty to keep me entertained. If you had told me a few years ago I could

watch Drain the Oceans AND the Simpsons AND Return to Oz in the same place I would have cursed you as a liar after I found out who you were and why you were talking to me. But this is the new normal and I am cool with that.

The point of all this is that television entertainment is changing, even if you are resistant to it like I was. According to a quick Google search 33 million people have cut the increasingly antiquated chord, and because I did not feel like doing much research beyond that I will take this number at face value. For decades cable providers have acted more like organized crime families rather than actual businesses so now that people have a way out of that, they should not be surprised that people are fleeing like they are on the Titanic during Iceberg Fest. The ways they seem to be reacting to this is driving away even more customers as they move channels to different packages to shake down their remaining subscribers for more money. Comcast towards the end told us they were taking the Starz channels away from our package even though the package we had was the Starz Package. In the next decade or so I can easily see TV’s not even bothering to have cable jacks and opting instead for easier ways to connect a Roku or Firestick if they are not already smart TVs to begin with. Overall I have found that cutting the chord has not been as big of shock to the system as I expected it to be, and despite what I thought just earlier this year I really like it. I am sure as the numbers grow even more people will find they really like it as well.