The Scene: After five years of searching for his missing nieces, the world weary Ethan 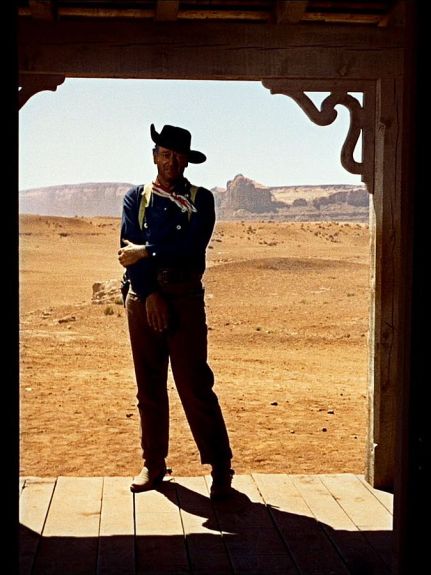 Edwards (John Wayne) has returned with Debbie (Natalie Wood), the one who survived. On the porch of the Jorgensen ranch, the friends of the Edwards family have a wave of relief wash over them as they see the posse return with Debbie. Martin (Jeffrey Hunter), the young man who had stood by Ethan’s side all this time is reunited with his girlfriend Laurie (Vera Miles) who rushes to his side. Debbie is rushed inside by those joyous to once again see her. In all the commotion, the old soldier who found her is left alone. Clutching his wounded arm, Ethan takes one last longing look before solemnly walking away from it all.

The Breakdown: Peter Bogdanovich once declared that John Ford is the quintessential American director, and in this single scene he proved why he is revered. Any fan of Westerns know this is a genre not particularly well known for happy endings. But with the Searchers we get a conclusion which is bittersweet; John Wayne has rescued his niece, but he went through great suffering to do so and there is no telling how she will now function in Western society. Having spent her formative years among the Comanche readjusting to her old life will no doubt be a struggle. Of all the iconic characters John Wayne has portrayed in the films of John Ford, Ethan Edwards has stood as possibly his greatest. One of cinema’s most popular antiheroes, this world weary veteran is a man without a country who’s hopes for finally leading a peaceful family life have been laid to waste. In this single moment we see the weight of it all on John Wayne, he came back to the family farm alone and now he will be leaving it alone. Ford set up this closing scene as a mirror to the film’s opening scene. Just a little while before we looked through this same door frame to see Ethan riding in as his brother, sister-in-law, nephew, and nieces awaited him. Now it is just him once more, confirming what we have known throughout the entire movie. Ethan is not one made for domesticity, he is a man forever destined to lead a violent and dangerous life on the fringes of society. This haunting final shot sends the viewer off with a final emotional gut punch in a film full of them.

Best Bit: With just a few silent moments, John Wayne communicates plenty to the audience. The audience feels everything the old grizzled antihero feels with just a few seconds of screentime in this scene.