Worst Episode of the Simpsons Ever

It goes without saying that The Simpsons are the most popular family in television. Even the rare few who have never seen the show instantly recognized this yellow clan from Springfield. The show’s journey to this lofty status has been an interesting one to say the least. Spinning off from the Tracey Ullman Show, the subversive take on a blue-collared middle class family was decried by conservative and family groups across the country. Even President George HW Bush criticized the show. But this did not slow down the Simpsons in it’s cromulent rise in popularity among fans and critics alike. When the 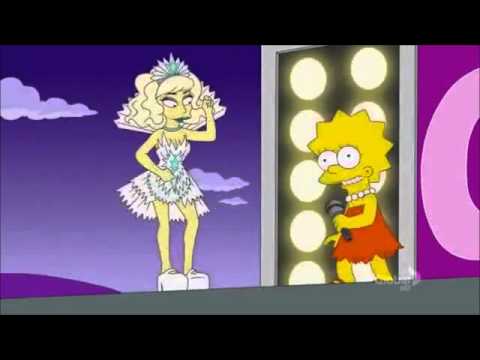 series was in it’s prime it fired on all cylinders every episode. But in recent years fans have complained that it is a mere shell of it’s former self. What was once an animated show with an attitude that bucked the establishment, The Simpsons has become the establishment. Granted has still proven it can crank out some fun episodes but not at the level or consistency it once did. But it has been during this era of the show that they produced what many regard as the worst episode ever, “Lisa Goes Gaga”. I had not seen this horrible episode since it originally aired in 2012 but recently I had the chance to revisits it and see if it really was as bad as many claim. And since I did not want my suffering to be in vain I have decided to write about my thoughts on this episode.

This infamous episode of the Simpsons sees a beleaguered Lisa Simpson attempt to reverse her fortunes after being voted the least popular student at Springfield Elementary. Though when her plans all backfire, pop star Lady Gaga is magically summoned to Springfield on her gaudy train to help restore the middle Simpson child’s confidence. No matter what Homer, Marge, or Gaga try (including Gaga making out with Marge because….) nothing seems to bring Lisa out of her funk. Long story short, Lisa

yells at Gaga and that makes her feel better and they end up singing a duet together because…..reasons…..

Just to clear the air from the start, and this may taint my view of the episode, but I am not a particular fan of this singer. Bubblegum pop music is not really my thing, and though I have heard she is good in the latest version of a Star is Born, but I fail to see what one can do that’s fresh and original with a movie that is on it’s fourth remake. That being said, when the Simpson was in it’s prime the writers and producers consistently came up with clever ways to utilize guest stars. Fans still remember such guest spots as; Dustin Hoffman in “Lisa’s Substitute”, David Duchovny and Gillian Anderson reprising their famed roles from the X-Files (“the Springfield Files”) or Phil Hartman as his myriad of hilarious characters. Even when a special guest played themselves they were used in a way that hilariously and perfectly fit with the narrative like Barry White (“Whacking Day”) or Lucy Lawless (“Treehouse of Horror X”). But the trend in recent years is not only to have a big name star play themselves but seemingly to pop up solely for a pop. “Lisa Goes Gaga” is the epitome of this. From the moment the pop singer appears on the show she is treated with the utmost reverence by the citizens of Springfield. Any jabs at her inflated sense of self-worth or strange behaviors are mild at best. This is particularly aggravating for the Simpsons, a show where no cow is sacred and everything is on the table for mockery. It has been said that the reverential treatment of Gaga is overboard it is to the point of parody, but that is a long 22 minutes to stretch out a single joke that is middling at best.

One would think that since apparently lampooning their big guest was off the table, the

writers of the show would pack the rest of the episode with jokes galore. But nothing really rises above a chuckle aside from the referring to a saxophone as a “jazz tube”or Millhouse’s observation about the cars from Cars. Granted the overall plot is nothing we have not seen before, with Lisa feeling like a lonely outcast but for a show that has seemingly been running for 87,324,914 seasons recycled plot lines are bound to happen. It is what you do with said plot that makes the difference. Whether than looking within herself and rising above or reaffirming a relationship with a family member, Lisa chooses to interact with a pop star.

For my money what truly makes “Lisa Goes Gaga” the worst episode of the Simpsons is that it pushes the titular family and their rich supporting cast aside. I recall the ad campaign for this episode made a big deal of Lady Gaga’s appearance and the people behind the show went to excessive territory over it. You may think I have brought up her involvement in this episode far too much, but that is because as a whole the episode is pretty much a 22 minute commercial for the singer. To this end they sacrifice; plot, characters, heart, humor, or any of the other elements which make for an enjoyable episode of the Simpsons. This is why “Lisa Goes Gaga” has earned it’s spot as the worst episode ever.

← Movie Review: ‘The Rise of Skywalker’
Retro Review: The Robot vs the Aztec Mummy →