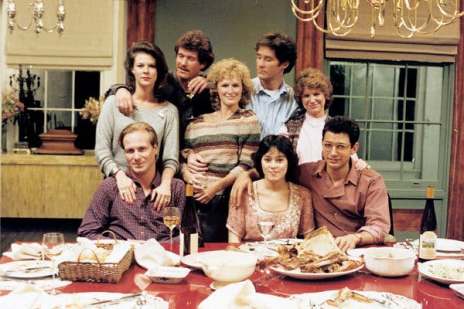 surrogate family. But as time passes you drift apart and end up living very different lives. Even if the chance comes to reconnect you may find the spark between you is not the same. This type of relationship is explored in heartfelt detail in the 1983 comedy/drama the Big Chill.

After the suicide of a friend from their college days, a group of old friends now full-fledged adults in their 30’s, reunite to lay their friend to rest. Following the funeral, married members of the group Harold and Sarah invite the others to spend a few days at their vacation home in order to reconnect. Over the days and nights which follow they learn the different paths, both expected and unexpected, their lives took. Unresolved issues between them which have been lingering for the past fifteen years naturally bubble up to be confronted.

Simply put veteran writer, director, and producer Lawrence Kasdan assembled an insanely talented cast and set the interactions of their rich characters to a killer classic rock soundtrack and let it all unfold. The end result is something believable and heartfelt

the audience can not help but become wrapped up in. While it may seem simplistic, each line of dialogue in each character interaction is plotted and delivered to perfection. The moments of raw emotion are balanced with the moments of laugh-out-loud humor so that the film never feels too light nor too heavy-handed.

As previously mentioned, Kasdan and his screenwriting partner Barbara Benedek needed a gifted cast to deliver this film and they got it in spades. The Big Chill boasts the talents of; Kevin Kline, Glenn Close, Jeff Goldblum, Tom Berenger, JoBeth Williams, William Hurt, Meg Tilly, and Mary Kay Place. It has been said many times that their performances seems to encapsulate a generation. They were the ones who fought in Vietnam, danced to Motown, and watched the Civil Rights Act become law. Now they are grown-up and having to navigate the world which is different from the one they may have imagined. Reunited in this vacation house, the group finally gets to cut back and embrace the fun they have been missing for the past fifteen years.

This film is a simple one, but no less one that will stick with you. It places the viewer firmly in the position of the fly on the wall during an important reunion for these characters. Even with a generational difference between the people in this film and those who may reading this, you will no doubt be hooked by their struggles and triumphs during this important time in their lives.