Addiction is a force of nature which has the ability to destroy lives without mercy. When those struggling with addiction decide to attempt to shed it, it seems to grow even stronger. Billy Wilder, one of history’s greatest filmmakers, witnessed this first hand as he watched his friend and legendary mystery writer Raymond Chandler delve into alcoholism. This would inspire the writer and director to adapt the Lost Weekend to the big screen. This 1945 masterpiece would prove to not only be one of Billy Wilder’s finest films but a landmark piece of American cinema.

After ten days of sobriety, recovering alcoholic writer Don Birnam is set to take a weekend trip with his brother Wick. When his brother and Don’s girlfriend Helen take in a concert before the train out of town, Don sees his window to head down to his favorite watering hole and engage once more in his vices. Seeing this as the last straw, Wick goes on the trip anyway abandoning his brother to his inevitable devices. This leaves Don to venture into a downward spiral for the next few days. He tries to pick up the typewriter and dive into his work, but he ends up floating around town in search of a fill for his addiction. He even lands in a hospital ward for those dealing with delirium tremens for a spell before escaping. As he is in the darkest of grips of alcohol, Helen finds him and doubles down on her determination to finally help him defeat his personal demons.

This is a dark and uncompromising film, and Billy Wilder pulls no punches on showing

the damage that alcohol addiction brings. The writer/director forces the viewer to watch through the unblinking eye of the camera as Don’s life is ravaged by alcohol. Flashbacks are used at key moments to show not only what drives Don, but the patience Helen and Wick have had in their tireless attempts to help him.  Given that Wilder’s last project was the landmark film noir Double Indemnity, he seemingly carried over the moody style and fatalistic tone of that film into this production. Needless to say this approach fits perfectly to the bleak but enthralling story he is telling.

With the Lost Weekend largely being a character study, lead actor Ray Milland is called upon to do some heavy lifting as Don. Being more than up to the task, the actor turns in what is possibly the best performance of his storied career. Whereas many would have played a caricature of a drunk, Milland’s performance captures the reality of intoxication. As he proclaims to the bartender the high he gets from several stiff drinks he truly comes across as a man on cloud nine. Don compares himself to the feeling Van Gogh must have had painting or John Barrymore had taking to the stage. Despite it all there is a sadness he seems to be hiding. Of course the gusto he feels is a facade and soon 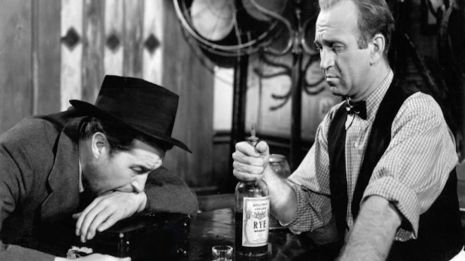 enough we see the damage it has left on him. It can be hard for some to watch as he slurs his speech and bemoans the state of his life as the booze is the only thing he finds comfort while he sacrifices his relationships with Helen and Wick. Ray Milland would go on to claim the Oscar for Best Leading Actor for his role in the Lost Weekend, even beating out the likes of Gregory Peck and Gene Kelly.

From the moment this film was released it has been hailed as a masterpiece, a reputation it has upheld to this day. To date the Lost Weekend and Marty are the only films to have won top prize at the Cannes Film Festival as well as the Academy Award for Best Picture. This movie is one which still holds up effortlessly even decades after it’s initial release and it’s power and message are just as relevant.

← Movie Review: ‘Birds of Prey and the Fantabulous Emancipation of One Harley Quinn’
Top 10 Kitties in Cinema – Animated Edition →