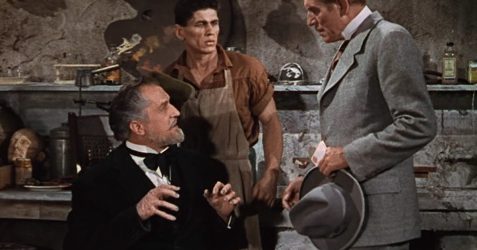 booms in movie history it is the horror genre. During the initial craze of three dimensional cinema in the 1950’s audiences were struck in terror by the likes of the Creature from the Black Lagoon, It Came From Outer Space, and the 1953 movie we are looking at today House of Wax. A remake of the 1933 film Mystery of the Wax Museum with Lionel Atwill and Fay Wray, this horror thriller made perfect use of the 3D gimmick and is still a fan favorite among the horror crowd.

An acclaimed sculptor of wax, Professor Henry Jarrod is in need of a new financial partner to help him get his museum up and going. When his attempt to court a new partner does not go 100% to plan, his current backer sets fire to the museum as well as the artist himself. Flash forward a number of years and a misshapen man stalks the street killing people and stealing their corpses. This strange crime spree seems to coincide with the reemergence of Professor Jarrod who is opening a new wax museum with an emphasis on the macabre and grotesque. However, a woman named Sue Allen notices something odd about this museum and begins to wonder if there is something sinister behind the scenes. Looking into the truth, she discovers a connection between Jarrod’s house of wax and the recent crimes.

Even today watching House of Wax you realize just how much this film played with the 3D effects. Bodies spring-up in the morgue, dancers kick their legs towards you, and most famously a barker with paddle balls breaks the fourth wall talking to the audience as he bounces the ball right at you. It really makes you feel how much fun this movie was in

it’s initial release. That is not to say House of Wax is not fun anymore, because quite the opposite is true. It is still; scary, suspenseful, visually arresting, and even a bit funny.

As far as the cast of House of Wax goes, viewers will no doubt spot a young Charles Bronson (credited as Charles Buchinsky) and Carolyn Jones who would find fame as Morticia in the Addams Family. But it is the lead of this movie who continues to make this classic a favorite, Vincent Price. The acting career of the actor had been on the down swing but this movie not only put him back on top it would forever tie the Merchant of Menace to the horror genre. The role of Jarrod played perfectly to Price’s strength as an actor allowing him to be sinister and charming with the right tinge of camp. The scene where he gives a group of woman a tour through his chamber of horrors in particular truly showcases the amount of fun he seems to be having in the role.

While the critics may not have loved it, audiences came out in droves for House of Wax. When adjusted for inflation this horror flick ranks among the highest grossing films of all time. To this day the movie holds a special place in the hearts of horror fans. Vincent Price’s performance is one which elevates the entire movie and is a large reason for the film’s longevity.

← Arrow: End of an Era
The Disney Marathon: ‘Treasure Planet’ →