People who are skeptical about UFOs often question trustworthiness of the single person or small group of people who claim to have seen something in the sky. But when an 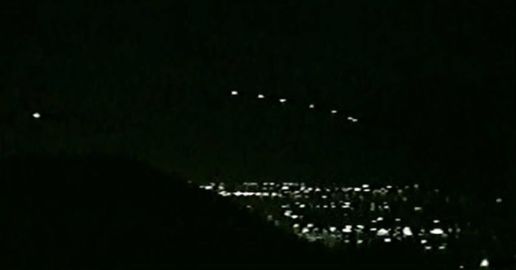 Unidentified Flying Object is seen by thousands of people from different backgrounds and walks of life across an entire state it becomes a lot harder to dismiss it. This is what happened on March 13, 1997 when a massive object soared over the night’s sky in Arizona and had it’s flight pattern observed by countless people. There was no way to brush this one off and the governor of the state and the Air Force had to find a way to brush it under the rug. What was seen that night has become known as the Phoenix Lights, and what they are remain a mystery.

Despite what this event came to be known the first sighting of the Phoenix Lights began a little outside of Las Vegas in the town of Henderson, Nevada. A witness felt a strong rush of wind and looked up to a series of lights on a massive triangular aircraft soaring through the sky headed in the direction of the state line. At 9:15 that night, the first person in Arizona to see the UFO was a police officer in Paulden , Arizona. He too described bright lights in a V-formation which were headed south. A few minutes later it made it’s way across Prescott, Arizona and given it’s incredible size and the notably clear

night sky, it was very noticeable to the witnesses in the area. It would seem these lights were changing colors along it’s journey. While the police officer in Paulden claimed the lights had an orange/yellow tint to them, the people of Prescott claimed they were white. According to a report filed with MUFON (Mutual Unidentified Flying Object Network) the craft was very maneuverable and able to change directions quickly and accurately when need be.

From Prescott the mysterious aircraft travelled south down Highway 69 towards the town of Dewey, being witnessed by drivers along the way. One family of travelers pulled into a grocery store parking lot to observe the object and were amazed and how something so large emitted no noise. Finally, after a night of travelling over scared and curious witnesses, the craft made it to the city it became named for. Naturally hovering over a major metropolitan area for what was determined to be 2 hours means that it was seen and photographed by countless individuals.

Seeing how this the most highly witnessed UFO event in history, the Phoenix Lights grabbed national headlines as nobody had an explanation for what was behind the lights. While eyewitness accounts tell differing stories on the number of lights or what

color they were, across the boards thousands saw these lights attached to a massive object in the shape of a carpenter’s square. This event changed a number of witnesses from skeptics to believers in possibility of extraterrestrial life. Phoenix-area physician Dr. Lynne Kitei is chief among those who had an about-face in belief upon seeing the Phoenix Lights. She has become very vocal in a movement to discover the truth behind what happened. There have been countless credible eye-witnesses who saw the aircraft that night, from; policemen to former military to government officials to doctors, and even Kurt Russell.

When the many people over this large of an area all claim to see something unexplainable it becomes difficult for government officials to simply brush it under the rug. The first civic leader to have something to say about the event was the governor of Arizona Fyfe Symington. Governor Symmington would convene a press conference claiming he would reveal the party responsible for the Phoenix Lights. Rather he had an aide dressed in an alien costume come out for a bit of fun. While many found it distasteful that Symmington would use this mysterious event as a platform for jokes, it was later discovered behind the scenes that he was questioning officials from the National Guard and the nearby Air Force base for information. A decade later during an interview with the Daily Courier Symmington revealed that he too saw the mysterious V-shaped aircraft that night, and as a former fighter pilot he knew that what he was seeing was no known aircraft from this world.

When the military spoke on the matter, they remained true to their brand and offered a nonsensical excuse. According to them a group of A-10 Warthogs from the Barry Goldwater Range near Phoenix were firing off flares in a training exercise. So it would appear these flares gathered together in a symmetrical shape outside of Las Vegas and 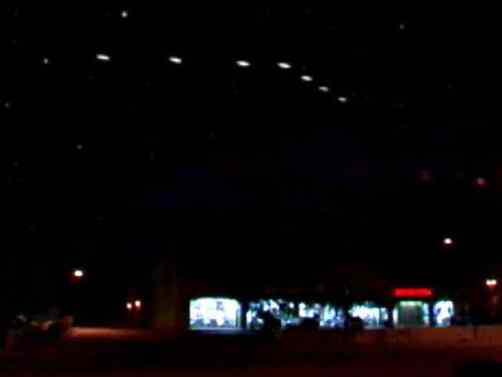 flew themselves south towards Phoenix, Arizona while maintaining their shape. Last year UFO researcher and author John Greenwald submitted a Freedom of Information Act request for information on the supposed flares, that Air Force had no exercises going on in this region at the time of the lights.

To this day, the Phoenix Lights remains a topic of great curiosity not just to UFOlogists but to those who saw it firsthand. Naturally the government refuses to provide any real answers on the matter which makes it more difficult to gather the information needed to solve this mystery. Strangely this event was not the only time the Phoenix Lights were seen either, as recently as 2008 something resembling the same craft from the fateful night had been seen by multiple people in the region. Debates range from an alien ship to an experimental aircraft of more earthly origins. But it would seem we may never know the truth. Now we have reached a point of action for you readers. As I continue to find accounts of the creepy and unexplained, what would you like to see more of? Ghosts? Monsters? Unsolved Crimes? Feel free to comment below

← The Disney Marathon: ‘Aladdin’
Thor: Who is Christian Bale Playing? →