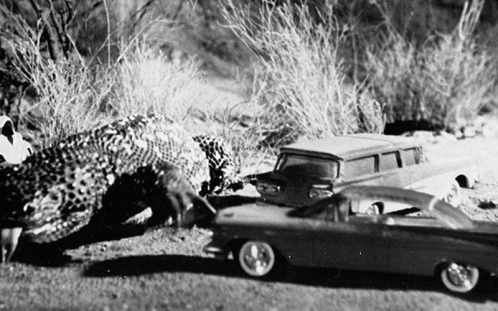 If a massive reptile from the prehistoric era lived in the area around your hometown one would think somebody would notice after a while. Even if they do not see it, one would think the townspeople would notice the giant footprints in the forest or plants/animals going missing as it searches for food. But in 1959, the cinematic citizens of a small rural town were oblivious to all the signs until it was too late. Luckily a hot rodding kid with an affinity for playing terrible songs on his ukulele is willing to stand up to such a creature in the B-movie favorite the Giant Gila Monster.

It all begins when a young couple parking in the middle of the woods are knocked down a ravine to their death by an inattentive giant lizard. Their friend Chase happily lends his help to the incompetent local sheriff in the matter. They begin to realize the woods around their community are being stalked by a gigantic Gila Monster. Being disturbed by all this newfound attention, the massive reptile begins to cause more havoc including derailing a train. Meanwhile a radio DJ, who probably has brain damage, believes that Chase has a musical gift which will hit it big. A party is thrown at a barn to launch Chase’s budding music career, and with all the townspeople in a single location naturally the Gila Monster unleashes his fury. With his family and friends all in danger of being monster food, Chase has to step up and save the day, even if it means sacrificing his beloved car.

In a rather interesting move, this film was financed by the owner of a number of drive-ins in Texas. He realized the need for content to screen, with the hopes of making a double feature. He partnered with well-known Western actor Ken Curtis to produce the Killer Shrews and the Giant Gila Monster. Since hiring a veteran director was out of budget, special fx artist Ray Kellogg was turned to helm the films. Though they had a cast and a director, apparently they could not find an actual Gila Monster so a Bearded Mexican Lizard was used instead. Considering it’s sister production blatantly dressed 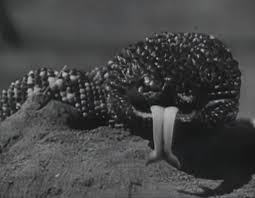 dogs up as shrews, this is not a bad substitution at all.

Just to go ahead and get it out of the way, the Giant Gila Monster is a very silly movie. The heroes of this movie are understandably a gang of teens who were the film’s target audience. During this point in American history, businesses saw teenagers as a new demographic to sell to and they loved going to the movies. In response horror movies made on the cheap were churned out at a brisk pace. Amid this flurry of films there truly are some great gems because of their unexpected quality or because they are unintentionally hilarious. the Giant Gila Monster falls into the latter quality. But it is hard to argue that this film knew exactly what it was going for. Special fx artist turned B-movie director Ray Kellogg made sure this movie included: hot rod-driving teens, a hip disc jockey, a giant monster, and a French beauty queen in actress Lisa Simone. These are all the ingredients for drive-in schlock gold.

The Giant Gila Monster is the monster movie equivalent of comfort food. It may not be good for you, but damned if it is not enjoyable. If you find no joy in watching a Mexican Bear….er Gila Monster tromping through miniature models, you may have wonder about the status of your very soul. There is no denying the cheap production values of the flick, so if nothing else the movie lends itself to some great riffing. There is no denying the film’s charm and likability even if the character you are rooting for is the reptilian monster.