In the 1960’s teenagers solidified their power at the movie box office, and one of the trends which emerged courtesy of this new market demographic was the teen beach

movie. One would guess these young audiences got to live vicariously through the teens (and often young adults playing teens) having good wholesome fun in the sand and sea. Famed studio American International Pictures was the driving force behind these movies along the way creating stars out of the likes of Frankie Avalon and Mouseketeer veteran Annette Funicello. The coupling “Frankie & Annette” was box office gold for seven films, and in 1965 the two made their biggest hit yet with Beach Blanket Bingo.

One of the fun things about Beach Blanket Bingo is there are multiple narratives going on at once and all of them are rather silly. There is Frankie Avalon’s character (creatively named Frankie) is trying to get together with Annette’s character DeeDee. But also the tale of burgeoning pop singer Sugar Kane and her manager trying to make her a star with the teen crowd by putting her in dangerous situations. The man she supposedly saves the life of, Bonehead, falls in love with a mermaid. There is also a Nazi-inspired biker gang causing trouble. But they have a loose cannon member in South Dakota Slim (played by infamous movie crazy man Timothy Carey) who seeks to kidnap Kane to pull off a Perils of Pauline style trap. More or less all these come together in the end. As you can imagine the plot is not important, it is a loose connective tissue to get the kids into wacky hijinks. These are the Baby Boomers in their carefree prime looking for fun and 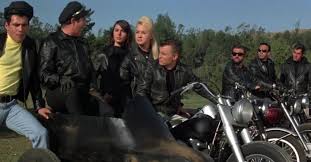 sun and finding a lot of both.

Though you should never trust a grown-up there are plenty of them in this flick. But given the talent level of said actors behind the adults it actually lends credibility to the production. Comedy legend Buster Keaton managed to revitalize his career in these teen beach flick and Beach Blanket Bingo continued this streak. Insult comic master Don Rickles has a memorable cameo, pretty much playing himself at a comedy show for the kids. The most prominent adult cast member is Paul Lynde who I unashamedly have a soft spot for.  For my money he had criminally underrated comedy chops at he gets to show them off a bit here.

While it is not Citizen Kane by any stretch of the imagination, Beach Blanket Bingo accomplishes it’s goal of being a fun romp on the shore. Things do take a walk on a strange side at times, especially considering the fact one plot point features a mermaid,

but the overall campiness of the film keeps it from feeling too out of place. One could easily argue that it is the definitive movie of its genre as it contains a little bit of everything people saw these movies for. This would be the swan song for this stage of Frankie Avalon’s career, though he would cameo in a few more teen beach movies, this would be his last starring role. If you are curious about this style of film, I do recommend Beach Blanket Bingo as the perfect entry point.