Classic Scene: Puttin’ on the Ritz

Puttin’ on the Ritz

The Scene: Doctor Frederick Frankenstein (Gene Wilder) has finally embraced his family business and created a being from the body parts of the dead, all powered by the brain of Abby Normal. The scientist knew he had to show the world he succeeded where his more famous grandfather failed. Of course the way to do this was with donning his finest tuxedo and top hat alongside his creation (Peter Boyle) to perform Irving Berlin’s classic tune “Puttin’ on the Ritz”. He begins the presentation in a sterile scientific fashion before cuing up the music and kicking-up their routine. Frankenstein takes lead as the Monster tries to mimic him and 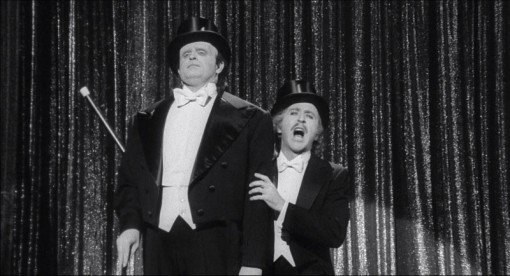 chimes in with the appropriate lyrics. Eventually the crowd who was once hostile to Frankenstein turn the corner and cheer the musical talent of the doctor and his Monster. But a busted stage light ruins everything and the Monster is driven to go on a rampage.

Deconstruction: When Gene Wilder presented the screenplay to Mel Brooks the two legendary entertainers went through the script together to make adjustments and notes. When they arrived at this now famous scene, Brooks inexplicably wanted to cut it out of the picture. This casual disregard provoked Wilder into a passionate defense of the monster and creator doing a musical number together. After a period of arguing, Mel Brooks casually relented to his collaborators demands. When questioned as to why he gave up so easily, he said that this scene would either be a stinker or comedic gold and but did not know which. The iconic director would judge by how hard Gene Wilder was willing to fight for it as to which one of those it was. Needless to say this judgment call proved correct as this is one of the most beloved scene in a comedy masterpiece filled with great memorable moments.

Best Bit: The tap dancing at the end of the routine. While Frankenstein performs more complex steps, the monster is only capable of more minimal moves. Yet as this continues we see the creation gradually able to keep up with his creator. This is a brilliantly funny and subtle way to show the character’s growth in such a short span of time.

One thought on “Classic Scene: Puttin’ on the Ritz”