Captain America: Wielders of the Shield

Ever since the creation of Joe Simon and Jack Kirby burst onto the scene, decked in a star-spangled costume and socking Hitler in the jaw he has been an icon of Marvel Comics. Steve Rogers volunteered for a risky medical experiment and the result was he became a superhero dubbed Captain America. Wielding his famed shield, he has fought evil across the decades becoming a fan favorite in the process. But he is not the only super soldier who hold his mantle and in fact between various deaths and aging and being frozen for a good chunk of time, others have held the shield of Captain America. Now with Disney + set to give us a show which tackles the legacy of Cap with film characters; Falcon and Winter soldier being the leads with fellow Caps; Isaiah Bradley and John Walker cast (Carl Lumbly and Wyatt Russell respectively) it is time to look at all of those who have thrown the mighty shield of Captain America. 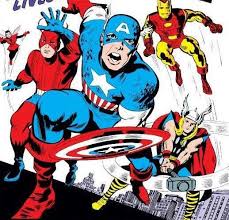 Steve Rogers: Of course the original stands as the standard-bearer for the role. As World War II bean and it seemed inevitable the United States would become involved. Rogers felt a moral responsibility to do what he could to stop the Axis Powers. Unfortunately, he was physically incapable of joined the armed forces, but he was the perfect experiment for Dr. Erskine and his super soldier serum. Steve Rogers transformed into someone who was the pinnacle of human physicality. Taking on the mantle of Captain America and wielding his shield he inspired countless people all over the world to battle the evil which threatened humanity. His tenure was cut unexpectedly short when battling his greatest foe, the Red Skull, he ended up frozen in ice for decades. He was later discovered in contemporary times by the Avengers. Despite now living in an unfamiliar world, Captain America did what he knew best and continued the fight against injustice. Before long he took on a leadership role in the larger superhero community commanding respect from his peers across the Marvel Universe.

Sam Wilson/Falcon: After the villain known as the Iron Nail forced Steve Rogers into what his natural age would be someone else had to be called upon to carry the mantle. Naturally Rogers’ longtime friend and partner Falcon was chosen. What followed were some of the best and most reflective Captain America stories ever. When a symbol of this country goes from a Caucasian who has held the role for years to an African-American man seen as an interloper it caused a stir in Marvel Universe politics. Of course being from an entirely different background from his predecessor, Wilson had a completely different view of this country than Rogers. Mirroring our own divisive political atmosphere, right-wing pundits and politicians of the Marvel Universe constantly hounded the new Captain America with a hashtag movement demanding he surrender the shield.

Bucky Barnes/Winter Soldier: In the aftermath of the blockbuster event Civil War, Captain America lay dead on a set of courthouse steps leaving a void in the superhero community. Having made his return to the Marvel Universe as the Winter Soldier, Cap’s former sidekick Bucky Barnes felt a sense of responsibility to carry on the legacy of his old friend. Given a sleek metallic suit by Tony Stark he set out to carry on the Captain America legacy. This is a responsibility he take sup during a particularly tumultuous time in the Marvel Universe as the Skrulls have been revealed as having infiltrated society and following their defeat Norman Osborn began his dark reign. Though he performs his role admirably even after Steve Rogers returns, Bucky’s past as the Winter Soldier catches up to him and he relinquishes the role back to Rogers. 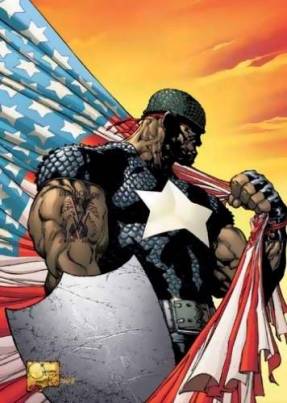 Isaiah Bradley: Following Captain America vanishing into the ice during World War II, the government demanded another patriotic super soldier. But as the formula which created Cap died with it’s creator Dr. Erskine, it fell on scientist: Dr. Koch and Dr. “Reinstein” to replicate the super soldier serum. In a move evoking the real life horrors of the Tuskegee Experiments, Koch and Reinstein experimented on African American men in order to find results. Isaiah Bradley was one such guinea pig, and he emerged with the peak physical prowess of Cap. The government began to utilize him on missions, but the serum which empowered him also took a heavy toll on his mental state. He was eventually imprisoned for stealing the original costume and shield of Captain America, though he was pardoned by President Eisenhower. His grandson Eli would continue the family legacy by taking up his own shield as Patriot, a member of the Young Avengers.

William Burnside, Jeff Mace, William Naslund: As mentioned previously the government wanted a new Captain America while Steve Rogers was on ice. As such they tried out a series of men to dock the red, white, and blue and carry the shield. Burnside along with his friend Jack Monroe actually went through the trouble of having plastic surgery to look live Steve Rogers and Bucky in order to make it appear as though they were the real deals. Mace actually served with the real Cap as, Patriot, a member the Invaders before he was asked to pick up the shield. He would later retire from the role before passing away. Naslund also fought in World War II under the name Spirit of ’76 as a member of the British superhero team the Crusaders. His time as Cap would come to a premature end as he gave his life saving then-Senator John F. Kennedy from an assassination attempt.

Vance Astro/Major Victory: In the timeline of the original, Vance Astro was a man frozen in time and sent into the far future. Once he is awakened he is brought on as a member of the Guardians. During his time with the team, he discovers the long lost shield of Captain America and takes it for his own, changing his alter ego to the more fitting Major Victory. At some point during his adventures he becomes lost in time again only to be discovered by Star Lord in the main Marvel timeline who rescues him which leads to an alliance between the two teams who call themselves Guardians of the Galaxy.

John Walker/US Agent: When Steve Rogers famously relinquished his mantle as Captain America, the aggressive vigilante John Walker was chosen to take his place. His co-creator Mark Gruenwald intended on his being the reverse side of the Cap coin from Steve Rogers. Instead of a dutiful soldier from the northeast, he was a volatile Southerner who did not mess around. Walker leapt at the chance to be Captain America feeling that he would be perfect to fill the boots for a more contemporary era. Over time he became more dangerous until he inevitably had to do battle with the original Captain America. Later he reappears under his new identity US Agent and joins the newly formed West Coast Avengers during the classic “Vision Quest” arc. Walker has never been particularly popular among his superhero colleagues, though he always acts with a sense of duty even when he does not like what he is tasked with.