I’m a huge fan of Stanley Kubrick, and he is one of my favourite director (it’s either him or David Lynch). He was also potentially the most intelligent director ever, as he threw a ridiculous amount of subtle themes and messages into his later movies, especially. So, having finally sat through Lolita, I’ve now seen all of his films, and some several times. So, I thought I’d rank them, first to last, in terms of what I thought of them.

It could only be 2001 at the top of the list. The most polarising of his movies, and the one I have the most trouble spelling, is long, unwieldy, uncompromising, pretentious, spectacular, mysterious, and unadulterated awesomeness. The special effects is the main thing that stands out now, as it is mind-boggling that this movie came out in the late 60s. The story is also truly epic; a span of a few million years, killer robots, aliens (?), spaceships, beautiful planets, and lots of seeming incoherence. This is a movie of intelligence, and if the mood is right when 2001 is attempted, it achieves the extraordinary state of pure movie magic, like all the best movies.

Kubrick’s attempt at a horror movie is stunning. He creates images that are both terrifying in the short term and creepy in the long term, and throws in a general sense of unease by using subtle tricks with the sets and music. As with 2001, The Shining hides below the surface, masquerading as a simple haunted house story. And Jack Nicholson was seemingly made for this role, as he leers and menaces his wife and child with gusto.

The sadly forgotten movie of the latter day Kubrick oevure, which is ridiculous considering how good it is. Sure, it is a period piece, which will turn off lots of folks, but the pacing and cinematography is amazing. For a movies that pushes three hours long, the times flies fast as Redmond Barry cheats, bluffs and maneuvers his way from a lowly Irishman to Lord Barry, mixing himself up in the army, high French society, and unruly stepchildren, complete with lush visuals and easily the most realistic lighting on a period movie ever.

A bit lower than some might suspect, it is still a truly great movie, but perhaps doesn’t run as deep as the others listed before it. This could be Kubrick’s most personal film, a proclamation of where he saw society heading, with a lack of common sense and the general loss of culture. The sets are still crazily good, Malcolm McDowell is sleazy and cheeky, and the classical soundtrack a perfect fit.

#6 – Dr. Strangelove: Or How I Learnt To Stop Worrying And Love The Bomb

Dr Strangelove just proves how Kubrick could adapt to almost any genre with ease. I wouldn’t go so far as to say it is hysterically funny, but some of the sheer nonsense, especially in the acting of both Peter Sellers and George C. Scott, is truly amusing, and the whole movie highlights just how dumb Kubrick saw the leaders and military figures of his day.

Bit of a toss up between this and Full Metal Jacket, but I went for this based on consistency and brevity. Kirk Douglas is commanding in the lead role, and the question about whether laws should be followed just because authority says to is still a relevant one. Timothy Carey is also awesome, I doubt another character actor with his… presence will be found again.

Let me explain. I agree, along with pretty much everyone else, that the first 45 minutes, at the training camp, are vintage Kubrick. But that’s only a third of the film. The rest is still pretty good, but Kubrick does something unusual for him; the usual balance of surface narrative and underlying themes is completely missing, skewed towards blatant anti-war messages. If it didn’t feel like two different short movies tenuously linked by one character, it might’ve been better. 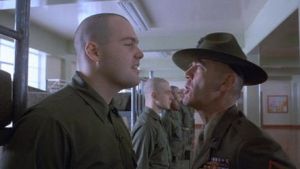 Everyone remembers this bit, but it’s not the whole movie.

I just finished this, and it’s the last of Kubrick’s ‘early period’, where he focused more exclusively on plot alone. It’s a fine recreation of the book, especially considering the obvious restraints of a pedophile story made in the early 60s, but there is nothing more, nothing particularly exciting, and it’s maybe a little long, even if Peter Sellers and James Mason are terrific in their roles.

Another early movie, this time about a horse track heist. It’s pretty cool, and well crafted, but it’s clearly Kubrick just trying to find his feet. Timothy Carey once again is hammy and weird, and produces a giant laugh towards the end.

No, I’m Spartacus! I lost interest about halfway through. Maybe might suit someone who can stomach three hour long swords’n’sandals movies better than I (although I liked Lawrence of Arabia, go figure).

Just a reasonable film noir to do with boxing. It’s Kubrick’s second film and it is entertaining enough.

I have just realised I haven’t seen Kubrick’s debut movie Fear and Desire, but I honestly doubt it would get higher than The Killing at #10

← ‘Chronicle’ DVD Review
Gone but Not Forgotten: Party Down →