Plot: During the American Civil War a hot-headed marine named John Carter suddenly finds himself transported to Mars, where the residents are in the midst of their own war.

Review: To say that the road to the big screen for the titular sci-fi hero John Carter has been a long one is a massive understatement. The material has been available for around 100 years and the serious attempts to get a production underway began almost thirty years ago. Although the material is hardly widespread in this day and age the quality of it has endured and the market is open for a big budget family friendly adventure film. Something has obviously gone awry however, as Disney posted a loss of $84Million for the quarter after banking heavily on John Carter being a blockbuster.

This has partly been accredited to the marketing, with the head of Disney marketing being new to the industry and director Stanton often rejecting the studio concepts, insisting on creating his own. His attempts to evoke the same sense of wonder he felt at seeing the disconnected images of Star Wars for the first time, ignoring the fact that this style had long been abandoned in favour of Don LaFontaine’s narrative driven style for a very good reason. Likewise the billboard images also neglected to give the audience much information, even on the tone of the film, and was largely ignored. The decision by Stanton to shorten to title from John Carter of Mars down to simply John Carter was also a mistake. His reasoning that it gave the impression of an introduction to the character is sound, but it also strips the film of all the mystique and intrigue the original title had, and must assume some knowledge of behalf of the audience (which the billboards and trailers were not providing).

So that sums up why the movie failed to ignite the box office in the way that Disney had intended. But that doesn’t address the real reason we came here today: is it any good?

In some respects, yes. In others, a resounding ‘no’. Let’s start with the good. The movie is downright spectacular. The visual flair that served Stanton so well in his previous films WALL-E and Finding Nemo is definitely on show here. Even before we get to Mars the movie looks fantastic, with a rich and colourful art design creating an involving fantasy world. When the action jumps to the red planet things look even more impressive, and the design of the aliens and the technology is unique and fun to watch. It seems like Star Wars, Lord of the Rings and steampunk got thrown into a blender. The action is also pretty rad, with John Carter’s interplanetary status giving him the ability to leap huge distances (and some how drop great distances without being hurt) and the routine is used to great effect. 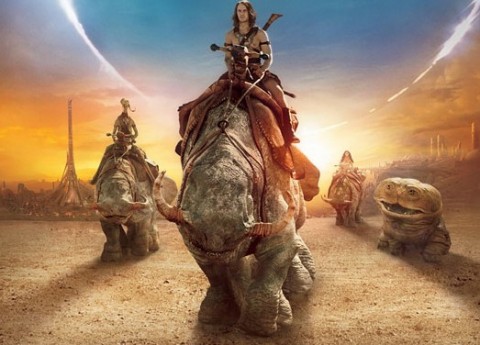 Sadly visuals do not make a blockbuster and while the movie is all over that, it’s completely lacking in story and character. The plot follows the oh-so-familiar ‘chosen one’ tale without bringing anything new or unique to the table. The BR copy used for this review had a tendency to skip every now and then and nothing much was lost. We move from one character dealing out exposition to another with the gaps between the action and, well, anything interesting happening. 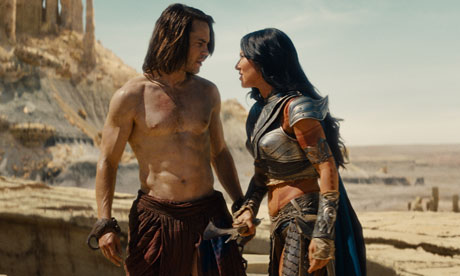 “So…my script for this scene was blank…”

When the character of John Carter is introduced in the opening scenes he seems downright cool. The sequence where he busts away from his captors again and again is funny and exciting. Once he lands on Mars, however, he magically turns into a piece of cardboard, interacting with a bunch of cardboard aliens. This isn’t the fault of young, mostly up-and-coming cast members, they have what it takes to carry a film like this. The script doesn’t give them anything other than bland material to work worth. All the characters are pretty much the same people by the end of the movie in spite of everything that’s happened to them. One almost feels sorry for leads Kitsch and Collins – you can’t blame them for taking roles inpotential blockbusters John Carter and X-Men Origins: Wolverine as they should’ve both been opportunities that few actors would ever get. Maybe we should ignore these films and give them a third chance at earning their cred.

Also have the half the characters are green skinned, four armed aliens and I don’t want to sound xenoist but I couldn’t tell them apart.

For all the weaknesses the film doesn’t have anything that actually grates the audience – except the editing. The director and editor likes to pull this trick where the character retains the same pose through a transition to a new scene. For example, in an early edit John Carter goes leaping through a window and is then seen landing in a prison cell. A nice artistic touch to be sure, and maybe of good use if done for comedic effect once or twice, but it gets used again and again. What it actually does is cause the viewers brain to take a couple of extra moments to process that they are seeing a new scene and catch up with what it happening. This proves more frustrating than anything else.

Ultimately it’s a movie with a solid concept, art, casting but totally lacking in pace, engaging story and characters.