Plot: An elite squad of SWAT team cops infiltrate an apartment building that houses the infamous crime lord Tama Riyadi. When Tama becomes aware of the raid and shuts down the building the police find themselves trapped on the sixth floor and surrounded by a small army of thugs, killers and psychopaths.

Review: When The Raid: Redemption starts out it’s pretty clear to viewers that we’re not going to spend time on superfluous details. We get treated to a brief montage of the lead character going through his morning prayers and work out before he bids his pregnant wife good-bye and puts on his tough guy face for the day ahead. I’m sure if there was an easy way to drop in a mention that he was two days away from retirement it would be there. He joins 19 other SWAT members in a truck, their boss outlines the plan and tells everyone about the most dangerous characters they may just encounter. Then the action starts. 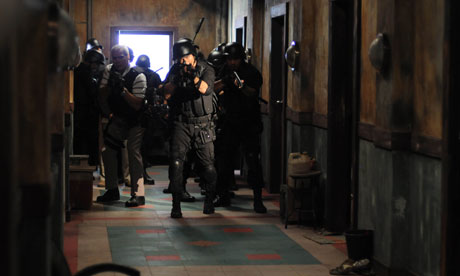 Some beatings and garrottings later the team have found themselves deep into enemy territory. We’re only fifteen minutes into the movie when the first bullet lets fly and it is by no means the last. As soon as Tama Riyadi becomes aware of the intruders a blood bath on par with the most famous in cinema begins and the twenty cops soon find their number reduced to five. Their target is all but forgotten as they have several floors of chaos between them and their escape.

“I challenge you to a duel with angry Indonesian men!”

The action is fast and frenetic, with a camera style to match. Not one shot seems to stay still and the editing has a staccato pace to it, yet between that and the extremely high speed martial arts on display the viewer will never get lost in the madness happening on screen. Our heroes are barely given a moment to catch their breath as they tear into the residents psychos while their building gets destroyed around them. When the bullets run out the machetes emerge. As well as the madcap film-making the movie showcases Indonesian fighting style pencak silat, which really is one of the most visually stunning martial arts techniques to be captured on screen.

The guy from the rave scene in ‘The Matrix Reloaded’ finally found more work.

There are a couple of plot twists throughout the movie, the odd brief introspective moment, but they’re just there as breathing space between the awesome fight scenes. The camera pulls a couple of nice tricks like dropping through a hole in the floor and flowing straight into a continuous fight sequence. Ultimately this is all about the action, and in that regard it’s one of the best the year has to offer. We’d try and explain what makes the action so awesome but we’ve exhausted all the descriptors that suit so we’re just going to post the trailer here:

See that? If you’re an action junkie then this is the best thing to come your way in years. Epic.

One thought on “Movie Review: ‘The Raid: Redemption’”