3 Shades of Celebrities: Women Who Have Rocked Blonde, Brunette, and Red

Most celebrities re-vamp their looks often whether it be for various movie roles or for reinventing themselves for a new album. Below are some of those brave ladies who have taken turns as a blonde, a brunette, and a redhead. And even though it’s all subjective, this author will give her own opinion on who looks best in what color.

Sienna Guillory usually has blonde locks but dyed her hair dark for her role as Jill Valentine in the Resident Evil movies and red for her role as the elf Arya in Eragon. Sienna has the perfect complexion to pull off any color but she positively glows with strawberry blonde hair.

Scarlett Johansson was for awhile known for her Marilyn-esque blonde locks but after being cast as Black Widow in the Marvel universe, she’s also being embraced as a redhead. She temporarily went dark but it didn’t last long. Personally, I think ScarJo looks best in her natural blonde hue.

Rita Hayworth is famous for being a sexy redhead but she’s also been a blonde and a brunette. Although she looks great in all colors, Rita is the perfect scarlet-haired vixen.

Rihanna has changed her hair more times than we can count and in doing so has explored many different hair colors and she looks equally awesome in all of them. 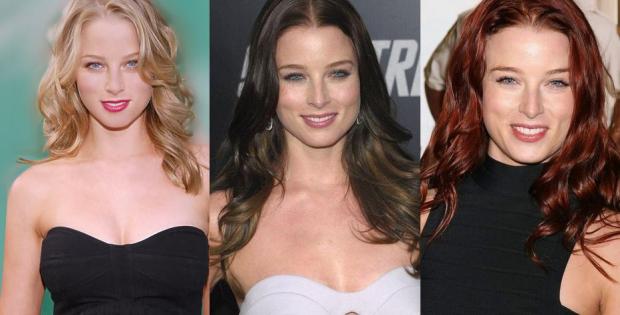 Rachel Nichols started out as a blonde but has gone both brunette and redhead for various movie roles. It’s a difficult decision since she pulls off all three looks, but blonde hair seems to suit her best.

Rachel McAdams is another actress that looks divine in any hair color you give her. Choosing between these three colors is like choosing between chocolate, vanilla, and strawberry ice cream; they’re all delicious and everyone will have their favorite.

Miley Cyrus has set the internet a-stir with her recent transition into a blonde but she’s also worked red hair apart from her most recognized brown hair. While the blonde may take some getting used to, I think it suits her.

Model (and now actress) Lily Cole is famous for her striking good looks and red hair but she’s also ventured into the land of blonde and brunette. She looks like a different person in each photo, all beautiful, but her natural ginger color makes her stand out from the crowd.

Jennifer Morrison is more well-known for being a blonde or brunette than she is a redhead but it seems she likes to dabble in various shades of hair color. As a blonde though, she shines.

Even as a brunette in Zombieland or a blonde in The Amazing Spider-Man, Emma Stone will forever be known as a fiery redhead and with good reason, the color is perfect on her.

Emily Blunt was normally a brunette (except when wearing red during The Devil Wears Prada) but she has recently gone blonde. Dark hair really brings out her eyes, and I think it’s her best color.

Drew Barrymore has been around for a long time and we’ve seen her in almost every hair color. She’s a chameleon that can work any shade with equal amounts of sass.

Demi Lovato started as a dark-haired brunette then ventured into red territory and now blonde. While I like the idea of her reinventing herself, I wish she would go back to her dark locks.

Bryce Dallas Howard is a natural red-head but dyed her hair blonde for Spider-Man 3 and has also been a brunette. She looks best in her natural fiery color.

Blake Lively became famous as blonde socialite Serena Van der Woodsen on Gossip Girl but has temporarily been both a brunette and a redhead for movie roles. Unfortunately without her golden locks, she looses that California girl appeal.

Adrianne Palicki started off as a blonde on Friday Night Lights but went brunette for the failed Wonder Woman show and then redhead for G.I. Joe: Retaliation and really works it.

7 thoughts on “3 Shades of Celebrities: Women Who Have Rocked Blonde, Brunette, and Red”