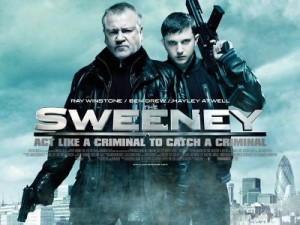 With his execrable reboot/remake/ravaging of a classic UK crime franchise, Nick Love proves himself to be the foremost hack of British cinema. For those of who not overly familiar with the history of British television, the original Sweeney was a slice of classic 1970s crime noir, starring Dennis Waterman and John Thaw. Those of who recognize John Thaw from the genial series Inspector Morse might well be shocked, as The Sweeney was all about two hard London cops taking on armed robbers and violent crime. Thaw in particular is a mile away from the sedate Morse as the coolest hard man in London, Jack Regan.

The classic show was so staggeringly popular in the UK it spawned two of its own motion pictures, and now, sadly, someone felt it necessary to make THIS one. If I haven’t given it away from the opening paragraph the film is an utter shambles. Ray Winstone does his best as  Jack Regan but he’s completely hampered by a shockingly bad script. The original Jack Regan and George Carter were tough as anything but followed the letter of the law absolutely. One of the main plot points in this remake sees Winstone remove evidence from the scene of a crime to give to his informant. This prompts an investigation internal affairs, despite the fact that ‘internal affairs’ does not exist in British policing, suggesting that Nick Love not only doesn’t know anything about British intuitions but that he couldn’t even be bothered to go and find out.

The rest of the film is riddled with this feeling of just not caring – I’m not sure what else explains the casting of Ben Drew as George Carter. Now I like Ben Drew, (perhaps more famous under his stage name of Plan B) but as an actor this is not somewhere where he shines. The gap in ability between him and Winstone really damages the chemistry between the two – and if there was anything that was going to salvage this wreck it would be a decent pair of characters that viewers could get invested in.

The premise for a Sweeney remake is a good one but the classic British series deserved something so much better than this. Everything about it screams lack of effort, and though Nick Love might try to claim the script was written with the original series creator his direction and the film’s woeful script completely misses the point of the characters and what made them interesting to watch. I mean, really how can you care a for a film that feels it necessary to put, not one, but two Ray Winstone sex scenes in front of the audience? It’s just not necessary – all of it! If you want my final verdict, find the original online somewhere and spend your money on Dredd instead. As for me, I’ll be watching Karl Urban bring some rightous justice to the streets of Megacity One safe in the knowledge that John Thaw’s Jack Regan would certainly approve of that.

One thought on “Movie Review: ‘The Sweeney’”