In case you missed it, Marvel has been making a push in the female character department. Not only is there an all female X-Men book, but there is also an all-female book called, Fearless Defenders. Valkyrie, basically a female Thor, has failed in her mission to find warrior women to replace her fallen Valkyrie sisters despite living in a world of awesome superheroines. She teams up with Hero for Hire, Misty Knight, former mutant and Valkyrie, Moonstar, Marvel’s version of Hippolyta, Warrior Woman, and a lesbian powerless archaeologist with a major crush on Valkyrie. Here are my suggestions for awesome Marvel female characters that currently aren’t doing much (if I remember correctly), who should totally be Valkyrie’s Valkyries (that’ll get confusing). 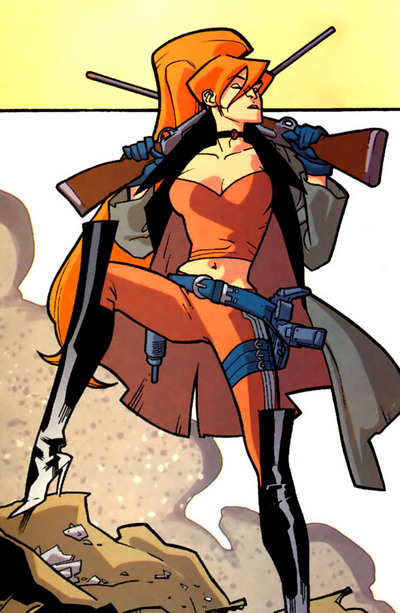 Elsa Bloodstone is the daughter of famed monster hunter, Ulysses Bloodstone. After his death, she inherited his red gem choker that gives her enhanced strength, speed, endurance, and durability, as well as a handy healing factor that makes her blood toxic to vampires. She also carried around a collection of weapons like big shotguns and other weapons her father had collected over the years. She first caught my attention in Nextwave: Agents of HATE, a borderline spoofish Marvel book, where she was depicted as a tough talking British bruiser. The last time I saw her was a cameo in the Avengers Arena book. She seems to be teaching at the Braddock Academy, Captain Britain’s answer for the Avengers Academy, a concept I don’t see sticking around. 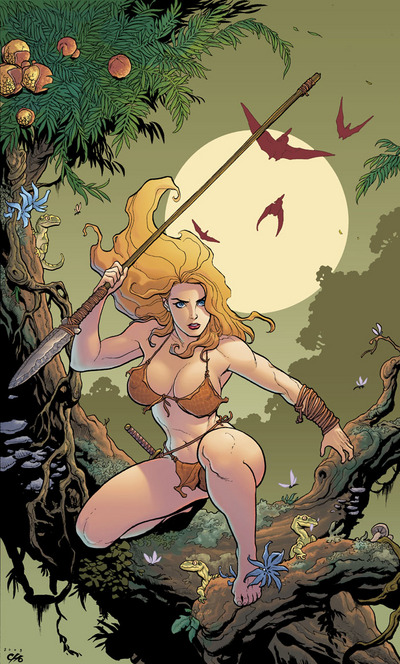 Shanna was part of an initiative started by Stan the Man Lee to get more female characters. She was born in Africa to a diamond miner. When her father accidentally kills her mother on a hunting trip, Shanna swore off guns forever. She later would move to New York to study zoology but would come back to Africa to defend the African wildlife from poachers. She even eventually moves to the Savage Land and marries Marvel’s resident Tarzan wannabe, Ka-Zar. She got an extra boost from a recent mini-series written by Frank Cho, even though it apparently doesn’t have anything to do with the canon Shanna.

Lilith is actually the daughter of Dracula. She is a half-vampire, like Blade, with all of their strengths and none of their weaknesses. For a long time, she didn’t even crave human blood and had the added bonus of being able to possess people (like Kitty Pryde, when she got the X-Men to help her take out Dracula). Her hate for Dracula knows no bounds, but as long as one of them lives, the other cannot truly die. So she has found happiness in making her father’s eternal life a living hell. She definitely has a wild streak being a vampire, but her hate for her father at least puts her on the side of the angels more often than not (I think?). Regardless, it seems clear from Warrior Woman’s disposition that being “good’ isn’t necessarily a prerequisite to being a Valkyrie.

Growing up was pretty tough for Joanna Cargill, aka Frenzy. It was hard enough being oppressed as an African-American female, but when puberty struck, she found out she was also a mutant. She is a particularly powerful mutant, giving her super strength and steel-like skin. Her anger at the world that refused to accept her left her open to being manipulated by some of the more vocal mutant voices, like Magneto and Apocalypse. And then eventually Cyclops. She fell for Cyclops when he became the de facto mouthpiece of the mutant race after M-Day. She eventually got a staff job at Wolverine’s new school trying to get over Cyclops after he went rebel on everyone. She came to the conclusion that she needed a break from the violence and left Wolvie’s school to find herself. Her warrior spirit and newfound pacifism would make for an interesting combo as a Valkyrie.

Faiza Hussain is one of the best new characters Marvel has come up with. Unfortunately with the cancellation of Captain Britain and MI: 3, she has pretty much disappeared. She is a British Muslim doctor who somehow got the superhuman ability to pull people apart safely and painlessly at a subatomic level so that she can see and fix what is wrong with them. She got this power after being hit by a lazer beam during the Skrull invasion (or something equally and ridiculously convenient). After being a big help during the invasion, she remained a reluctant member of the team until she pulled Excalibur, King Arthur’s legendary sword, from a stone making her the rightful owner. Afterward, she seemed a little more confident and was key to dispatching a vampire invasion (I swear it is coincidental that 3 of these characters are connected to vampires).

4 thoughts on “5 Suggestions for Marvel’s Valkyries”