Note – Filth was released in Scotland on Sep 27th and the rest of the UK on Oct 4th. It’s US release date at time of writing is unknown.

Filth lives up to its name and gives us one of the most sick and twisted films of the year and thankfully one of the best. There’s little if anything quite like it around and with it’s depraved main character, twisted sense of humour and dark turns it will stay with you for a while.

The main focus of the film is that of Bruce Robertson, the titular filth of a police officer, but thankfully the plot is still relevant, both to the film and the character. Set in the lead-up to Christmas, the film finds Bruce and his colleges all investigating the murder of a Japanese student while at the same time competing for the promotion of Detective Investigator. Brucie, being the morally fucked man that he is, sets about causing mayhem, starting fires within the department ranks and watching the world burn so he can get the job himself. However, one small act of kindness brings back memories of Brucie’s repressed past and he finds himself in the middle of a downward spiral, finally realising how far he’s fallen.

It’s a great plot because it gives Bruce an excuse to run riot, drugging colleges, double and sometimes triples crossing his mates, fuckin their wives, all while on his own binge of hard drugs, alcohol and meaningless sex. Add in the reasoning for his mental breakdown and a dark and perverse twist near the end and you’ve got a story worth remembering. 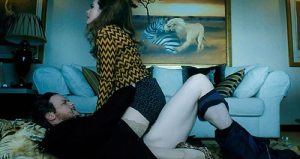 The acting was great throughout, like the film the focus was on Bruce but his colleges were an interesting lot. There was Peter, a metrosexual and possible homosexual, an uncomfortable trait to the man in a very bigoted department which Bruce exploited to no end. There was Dougie, a neo-Nazi, violent sociopath, a very alpha-male type so of course Bruce was fuckin his wife. Also in the force but to a lesser extent was Gus, a goody-two-shoes type that was always fuckin happy but seriously trusting to the worst of people. The only person on the force not to take Bruce’s bullshit seriously was Imogen Poots as Amanda, the only woman on the force, she played a small but pivotal role as she tried, and got the closest possible, to breaking through to Brucie’s scared, depressed core.

The closest people to Bruce were the only friends he ever had and even them he fucked over, his closest mate Clifford, played by Eddie Marshan from The World’s End, was a sad-sack officer, very rich but very naïve, he was bullied constantly by Bruce but stayed with him because Bruce was a fellow officer and a friend at times. Bruce’s partner Ray, played by none other than Billy Elliot was the closest to Bruce in terms of depravity by being a drug addict but he lacked Bruce’s confidence, because of his small dick he was very insecure, again a trait Bruce exploited to his own personal gain.

There was also Jim Broadbent as Bruce’s therapist, he wasn’t the film much but did turn up in his hallucination, clearly having fun as the crazed Doctor sending Brucie further into insanity. He was so much fun to watch that I wanted more scenes with him.

If you couldn’t tell yet this film belongs to James McAvoy as Detective Bruce Robertson, not only his best performance but one of the best of the year. Bruce is filth, he is pure and disgusting shite incarnated, he treats everyone like scum, mostly himself, he gets everyone on his side while also turning them against each other through manipulation and lies, he’s a bastard.

It’s not all just sex and drugs, part of Bruce’s character is also his weakness, the small flashes of humanity to remind us that he use to be a good person once. When he tries to save a man who collapsed in the street he’s reminded of his past in a sad and hurtful way that I won’t spoil. Suffice to say, remembering those days unlocks something in Bruce and the more he tries to mask it through influence and pain, both to himself and others, the further down the rabbit hole he goes, his hallucinations get worse, he becomes a broken shell of a man, slowly breaking down in front of our eyes, a final twist in the story reveals how far he has fallen.

Direction from Jon S. Baird is pretty damn good, I’ve not seen any of his previous work but here he does well. Firstly from an aesthetic view the film is great, it starts off vibrant, colourful and surreal, Brucie’s frequent visions have a darkly humorous edge to them which invoke more than a couple laughs at the outrageous nature of them – seeing a man goosestep in front of gays, retards and blacks is funnier than you expect. However as the film goes on and Brucie falls more and more into depravity his visions get darker, he sees himself and his colleges as farm animals, these being quick and violent, they scare him and rightly so. It gets so that even his hallucination of his therapist is turning against him.

The dark turn the film takes is great because it works so damn well, it’s great seeing Bruce fuck over his friends and workmates and he’s makes it a very funny watch but the more sad and depressed Bruce gets the laughter we had to begin with turns nervous as we realise this is a man that needs help, he is seriously messed in the head and is driving himself to self-destruction. Somehow Baird strikes a great balance so that we end up feeling sympathy for what should be a disgusting and deplorable villain.

There is so much I haven’t touched on with this film, from it’s dreamlike scenes of Brucie’s power loving wife Carol in strange yet interesting scenes – singing Silver Lady with THE David Soul comes to mind – to it’s excellent soundtrack including gems from the 60s and 70s like Billy Ocean, Tom Jones and a brilliant cover of Born To Be Wild. Put simply Filth is immoral and corrupt and a blast, I loved this film, it delivered all I wanted it to and more, if you get the chance do not miss this film, it will stay with you for a while and you will not forget it, or its sickening antihero of a protagonist, anytime soon.

← Review: The Best and Worst of POKÉMON X and Y
Darkly Dreaming: A Farewell To ‘Dexter’ →