Plot:  Based on the best-seller by Suzanne Collins, The Hunger Games: Catching Fire picks up a few months after the events of the first film.  Katniss Everdeen (Jennifer Lawrence) and Peeta Mellark (Josh Hutcherson) have returned to District 12, victors of the 74th Hunger Games.  Despite the win, Katniss’ world remains in turmoil.  Several of Panem’s districts are rioting, gathering inspiration from Katniss Everdeen’s defiance in the arena and rallying behind her mockingjay symbol.  Furthermore, her “love affair” with Peeta is a sham, something that’s virtually destroyed any vestige of friendship between the two.  Worse still, even though the faux romance may be fooling the public, it’s not fooling President Snow (Donald Sutherland) who sees Katniss and all the victors, as a species that must be eradicated.  With the quarter quell approaching, Katniss and Peeta soon find themselves drawn back into the arena, this time against a group of former victors.  Within the crucible of the Hunger Games, Katniss’ metal will once again be tested, but this time her indomitable spirit may spark a movement that catches all of Panem in the fire of revolution.

Despite director Gary Ross’ departure after the first film, Francis Lawrence (Constantine, Water For Elephants) proves a worthy successor.  While Catching Fire retains the feel and substance of the original, the film is distinctly Lawrence’s own.  Like the novel, Catching Fire focuses more on the after-effects of the Hunger Games not just in Katniss and Peeta’s life, but on the entire country of Panem.  Aside from the glitter of the Capitol and the fierce beauty of the arena, most of the film is shot in a stark and gray pallet.  This reflects the bleak winter weather but is also an inspired choice by Lawrence and cinematographer Jo Willems.  Even Victor’s Square in District 12 comes across drab and dismal, making Peeta and Katniss’ victory hollow.    They may have won but the majority of Panem still resides in misery.  The visual style evokes a desperation that is palpable throughout Panem.  Consequently, Catching Fire feels much more like a drama than a straight action sci-fi film, which is EXACTLY as it should be.

Yet despite this misery, Katniss’ open defiance in the arena inspires minor uprisings throughout the country, much to the consternation of President Snow (Donald Sutherland).  Sutherland once again makes for an excellent Snow.  Ruthless, cunning, and totally without morals, his scenes with Lawrence are riveting.  In many ways Snow demonstrates a politician at his most extreme.  I wouldn’t say Sutherland comes across as a power-hungry dictator, but more like a demagogue convinced he’s in the right.  The performance makes for fantastic social commentary when it comes to worldwide politics, particularly the United States.  Either way, Sutherland crushes this role and is absolutely diabolical. 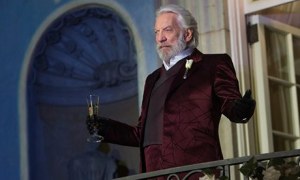 The citizens of Panem have always been aware of the yoke they’re under, but now they are beginning to believe they can do something about it.  A scene early in the film where Katniss and Peeta travel to District 11 demonstrates this.  District 11 happens to be the home of Rue, the young girl from the first film that helped Katniss survive.  After Katniss and Peeta express their personal thoughts on the matter, an old man dares to express his gratitude through the three finger salute and the mockingjay whistle.  For this definant act he is violently murdered by Peacekeepers.  The old man’s act shows how people’s desire for change is beginning to trump their fear.  It’s a harrowing scene and the fact that the population of District 11 contains minorities almost exclusively, makes for not so subtle social commentary.

At a personal level, Katniss’ close friend and potential love interest Gale (Liam Hemsworth) also exemplifies this growing change .  When Snow orders a brutal crackdown against District 12, Gale openly defies one of the Peacekeepers, resulting in a severe public flogging.  The scene isn’t Passion of the Christ bad, but it’s certainly brutal to watch.  When Katniss intervenes on Gale’s behalf, you get the sense that she’s moving from Hunger Games victor, to open participant in a simmering revolution.  For better or for worse she is the spark and the symbol, whether she desires the responsibility or not.  A lesser actress wouldn’t have been able to make this switch so readily apparent in so subtle a manner, but Jennifer Lawrence is no ordinary actress.  This is an iconic role that Lawrence was born to play.  While Lawrence was stong in the first film, Catching Fire shows Lawrence fully embracing the role and coming into her own.   I have to say that the scene brings it to a personal level for Katniss.  Panem’s civil unrest is something she can no longer ignore.  I’m also glad to see Hemsworth receive a larger role in this film, with more of a chance to chew some scenes up.  That Catching Fire balances the personal experiences of Katniss against the plight of the citizens of Panem is a testament to Simon Beaufoy and Michael Ardnt’s excellent script.  There is just the right mix of the wider social issues of Panem with Katniss’ own struggles.

As strong as Jennifer Lawrence’s performance was in Catching Fire, I was amazed at how far Josh Hutcherson has come with the character of Peeta.  While I wouldn’t call his performance in The Hunger Games awful, it did seem a tad vanilla.  That’s not the case with this film.  Hutcherson absolutely owned the character.  Perhaps that stems from Peeta’s own struggles in Catching Fire.  Not only does he have to contend with a fake public romance with the woman he actually loves, he also finds himself thrust back into the games again.  Couple that with a burgeoning wish to help the disenfranchised citizens of Panem, and the result is a fully fleshed out character.  Another tip of the cap to writers Simon Beaufoy and Michael Arndt for allowing Hutcherson to grow in the character.  Alongside Hutcherson, Woody Harrelson shines again as the drunken but loveable mentor Haymitch Abernathy.  I originally thought Harrelson a poor choice for this role, but now I can’t envision anyone else playing Haymitch, despite the ridiculous toupee Harrelson wears in the movie. 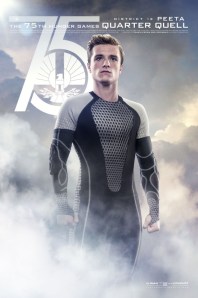 With Catching Fire, audiences are introduced to several new characters.  Sam Caflin’s Finnick Odair and Lynn Cohen’s Mags stand out in particular.  Caflin employs just the right amount of arrogance and secretiveness that makes you wonder what side he’s on; Katniss’, the Capitol, or his own.  Meanwhile Cohen’s charming and heartfelt turn as Mags is precisely what I pictured while reading Suzanne Collins’ novel.  Despite a complete lack of dialogue, Cohen still conveys a warmth and sweetness that makes her ultimate demise even more devastating.  Academy Award winner Philip Seymour Hoffman plays head game maker Plutarch Heavensbee with a certain aloofness that I didn’t quite care for.  While his performance was solid, it wasn’t everything I’ve come to expect from such a phenomenal actor.  I’d also be remiss if I didn’t mention the fierce performance of Jena Malone as Johanna Mason.  A former victor from District 7, Mason embodies the intense rage of the citizens of Panem.  Malone is sarcastic, mean-spirited, and vicious.  In other words someone you want on your side in a revolution.  I can’t wait to see where the next two films take her character.

While ostensibly a drama, Catching Fire contains its fair share of action and excitement, especially in the arena.  This time rather than a forested area, the tributes find themselves in an island setting.  There they contend with caustic fog, blood rain, vicious mandrills (mutant monkeys), rogue waves, and even the phantom voices of their loved ones crying out for help.  Furthermore, these dangers are relentless and happen hourly.  The arena serves as a microcosm for Panem as a whole, both the physical and the psychological hardships its people must endure.  The special effects gurus had their work cut out for them and I’m happy to say they delivered in spades.  Both the mandrills and the waves were particularly realistic.

In the final analysis The Hunger Games: Catching Fire proves not just a worthy successor to the original, but a marked improvement.  Francis Lawrence and company give audiences an excellent film that will please fans of the book as well as novices to the story.  The emotional closing sequences promise even better things to come.