Christmas Movies For After The Kids Go To Bed 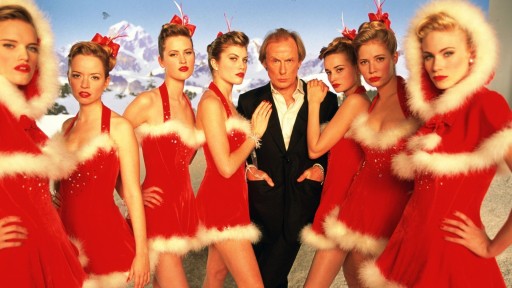 Love, Actually is a number of intersecting stories about love that takes place over the month of December leading up to Christmas. It uses this holiday that is simultaneously the happiest and saddest time of the year to characterize romance, which in many ways is also very happy and sad all at the same time. Although it has many of the cliches and over-the-top sweetness of your usual romantic comedy, it makes up for it with a top notch charming cast of every British actor EVER. Seriously, it stars Liam Neeson, Hugh Grant, Alan Rickman, Bill Nighy, Emma Thompson, and Rowan Atkinson, just to name a few. Plus, its not afraid of the occasional nudity.

9. Enemy of the State

In the late ’90s, go-to blockbuster machine Will Smith was cast as a lawyer who becomes involved with  corrupt politician and his NSA henchman when he is unwillingly handed a key piece of evidence to one of their crimes. He ends up on the run with the help of a paranoid surveillance expert, played by Gene Hackman. It’s a slick, exciting thriller with plenty of twists and suspense, not just prerequisite Will Smith explosions and one-liners. There aren’t even aliens either. It is not the most Christmas-y movie, but the cold gray wintery setting helps set the tone while the whole thing gets started as Smith is out Christmas shopping. 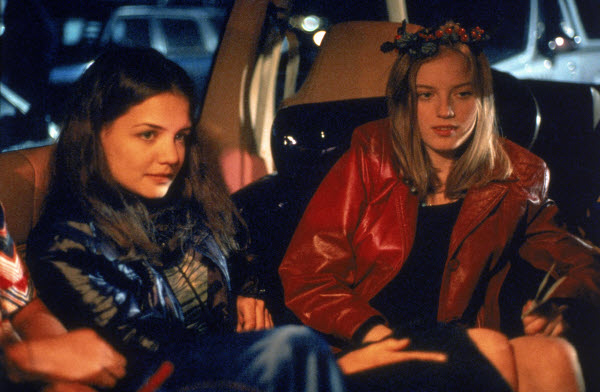 Go is one of the Pulp Fiction knock-off of the ’90s following what TV Tropes refers to as “Simultaneous Arcs.” We literally see the movie from one character’s perspective before rewinding to the beginning and watching from an other. They all surround in one way or another a drug dealer’s missing ecstasy. It might be hard to tell it is about Christmas since it takes place in winterless California, but the Christmas themed rave and the Christmas dinner of a sexually open married couple are good indicators. 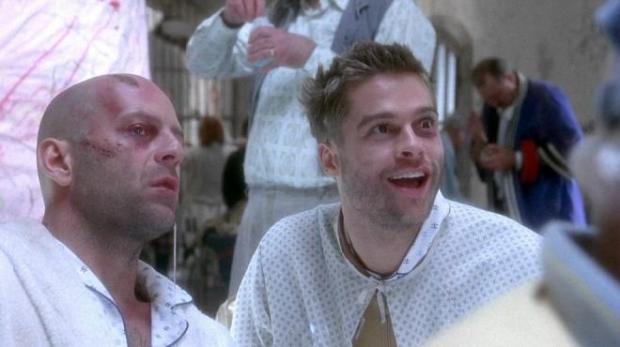 This is a pretty cool flick to say the least. In a future where humans are forced to live underground because of super diseases, time traveler Bruce Willis is forced back to the 90s to figure out what went wrong. Of course, he is immediately thought to be a crazy person and is institutionalized with a very daffy acting and looking Brad Pitt. Willis slingshots back and forth from his present to ours constantly with new information one of which is a very strange Christmas greeting. 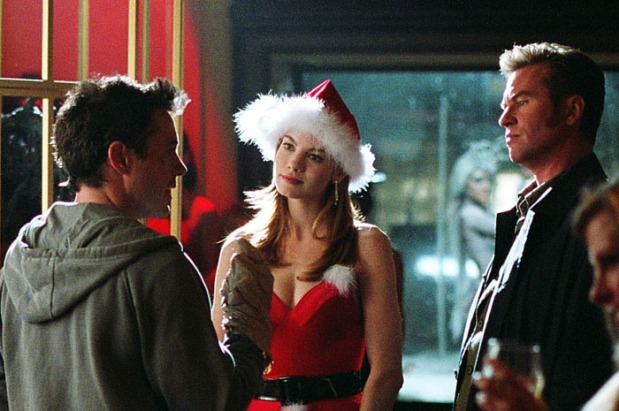 This won’t be the last time you see a movie by Shane Black on the list. This one stars Robert Downey Jr as a thief turned actor and Val Kilmer as a private eye turned acting coach who get in way over their heads when Downey pretends to be a private eye to impress an old love interest. Shot with curse-laden mile-a-minute dialog and near-slapstick-like capers, Kiss Kiss Bang Bang is good for anytime of the year, but the Christmas parties with scantily clad Ms. Clauses (one of which is the spunky Michelle Monaghan) and reindeer themed strippers make it somewhat appropriate viewing. 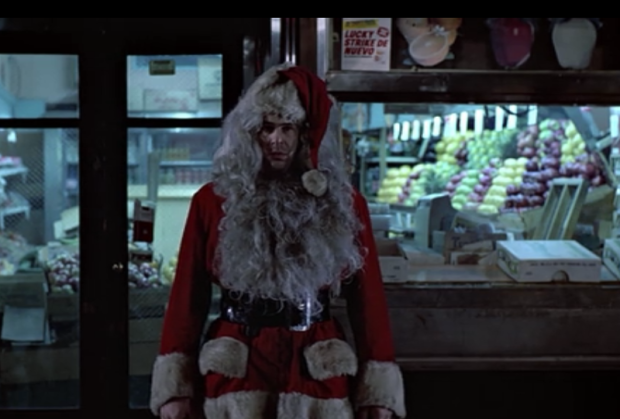 Two bored wealthy brothers who constantly debate over nature vs nurture decide to ruin a successful businessman and give his position to a street hustler just in time for the holidays. The movie stars Dan Ackroyd as the hoity-stoity business stuck on the streets, Eddie Murphy as the quick thinking con man, and Jamie Lee Curtis’ breasts……I mean Jamie Lee Curtis as a helpful hooker with a heart of gold. It is a real screwy take on the Prince and The Pauper, except the Prince and the Pauper aren’t voluntarily trading places. 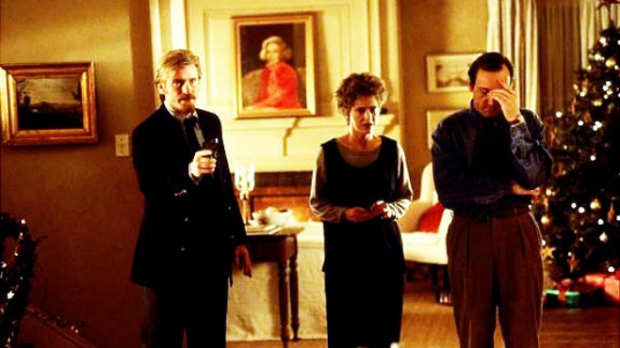 Of all the comedians who have tried there hand at acting, I think Denis Leary might be one of the few who are better at acting than stand up. He stars as an expert thief named Gus who after setting off a Rube Goldberg-esque house alarm takes a family hostage to evade the cops. Unfortunately, the family is made up of a feuding married couple on their last leg (Judy Davis and Kevin Spacey), their delinquent son, the wife’s pretentious in-laws, and the husband’s queen bitch of a mother all of whom antagonize Leary’s already ill-tempered thief. 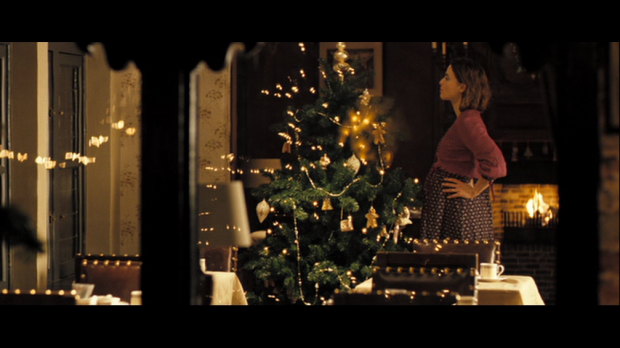 This is Martin McDonough’s half witty, half tragic tale of two hitmen lying low after a problematic job. This was the first (or at least the best) of Colin Farrell’s career resurgence as one of the hitmen along with Brendan Gleeson. They go sightseeing in the historical laced city of Bruges that is also covered in beautiful Christmas decorations and, of course, snow. Bad goes to worse though when their boss, Ralph Fiennes, shows up with a bone to pick. 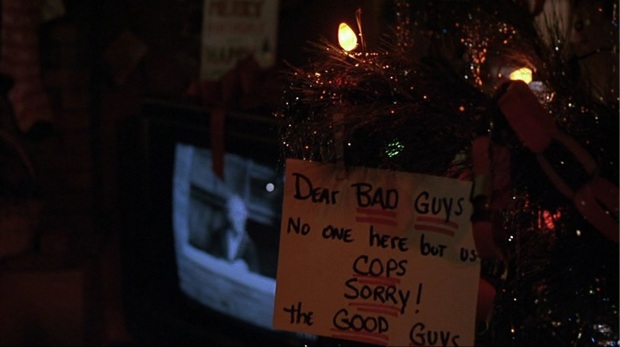 The second Shane Black movie is one of the classic mismatched buddy cop flicks. On one side, you have Mel Gibson’s suicidal marksman who thinks about eating a bullet while watching Looney Tunes’ Christmas Carol (not because of it, I assure you).  On the other side, you have Danny Glover’s family man with his idyllic nicely decorated home. Despite being mismatched, the chemistry is palpable. The action is always great, the thrills tense, the zingers always zing, and it takes each and every opportunity to remind you its Christmas. It is a near perfect action movie second only to one.

Die Hard! The end-all, be-all of R-rated Christmas classics and one of the finest action movies ever made. I have no problem calling it the absolute best. John McLane, played by Bruce Willis makes his way from New York to LA to visit his estranged wife and kids for Christmas. His wife’s company’s Christmas party is unfortunately interrupted by terrorists stranding McLane in the air vents to sneak around and take them out one by one before they kill everyone. Full of Christmas cheer and plenty of explosions, Die Hard is the absolute best movie to watch after you put the kids to sleep, that is, if it doesn’t wake them up.