Retro Review: ‘Silence of the Lambs’

It has never been a secret that the elite class in Hollywood have always tended to treat the horror genre like the idiot child at a holiday meal, making it seat at it’s own table while the “adults” enjoy a proper holiday meal at the “real” table. But with so many films having been made in that genre since the dawn of cinema it is inescapable that a couple of them have earned the admiration of the privileged few in the movie business. Fortunately for them, they do not have to tarnish their reputations by admitting a horror film has artistic merit, because they put those types of pictures in the thriller category.  From Psycho to Se7en, the powers that be can rave all day about certain films because rather than being considered low-brow “horror” they are “thrillers”. Sometimes it is unavoidable to classify films as such but that is what they do whenever afforded the opportunity. Never has this been so blatant than in the case of 1991’s Oscar winner for Best Picture, The Silence of the Lambs. 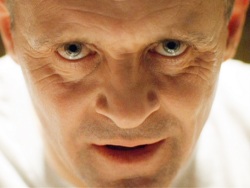 Directed by, Jonathan Demme, protege of famed filmmaker Roger Corman, The Silence of the Lambs is a film that pushed the envelope and succeeded in so many ways. By now we all know the basics of the story; young FBI trainee Clarice Starling finds herself hunting down a serial killer and in doing so enlists the aid of the imprisoned cannibal  Hannibal Lecter. This was not the first film to feature Thomas Harris’ infamous civilized killer, that honor goes to the criminally underrated Manhunter. But this is the picture that made Dr. Lecter a household name and a cinematic icon. This is due in no small part to the portrayal of the character by Anthony Hopkins; much like Boris Karloff in 1931’s Frankenstein,  Hopkins had to give the audience a terrifying monster who was restrained in some way. But rather than having to do so in silence under tons of make-up, Hopkins’ monster spent much of his time in a cell or strait-jacket, forcing the thespian to rely on his mannerisms and chilling voice to give moviegoers nightmares. But he does not waste the time he spends in restraints, rather he builds up the audience expectation of what he’ll do when he inevitably breaks free. Much has been made of his being only in the film for a few minutes, but his performance is so powerful that in some way or another the spirit of Hannibal Lecter looms large over the entire film. This character alone justifies the classification of this film in the horror genre, Lecter is nothing short of a monster hidden behind the facade of a prisoner.

In quite possibly the performance of her career (and with a career like her’s that’s saying something), Jodie Foster portrays the 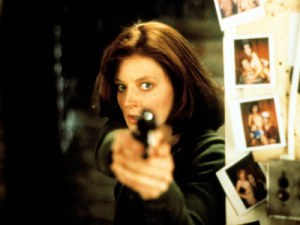 perfect counter to Hannibal in Clarice Starling. She lacks the psychopath’s cool composure but it is to her benefit as the audience identifies with the young agent. Jonathan Demme even makes the conscious decision to film her in many shots at a downward angle as a means to show that everyone else in the room thinks of her as inferior. Foster does such a tremendous job in her performance that not even Julianne Moore, come hold a candle to it when she took over the role in the sequel. Rounding out the ensemble is an entire group of incredible performers, including Ted Levine in an often overlooked role as the demented killer, Buffalo Bill.

The screenplay from Ted Talley, is able to present a vast and complex story in such a way that it does not drag, but rather keeps the audience entranced in what is unfolding. Despite the more modern setting of the film, Demme brings a great gothic flair to the visuals of the film akin to the Universal Horrors. From the underground cells housing the criminally insane to the basement of horror belonging to Buffalo Bill, the set pieces ooze of a certain eeriness and dread. This is reinforced by the way Demme chooses to shoot the film, the expert director uses several tricks to draw the viewer into the world of the picture. Despite the film being over twenty years the age barely shows, as the wardrobes and sets are vague enough to fit in with any time period.

Despite attempts to classify Silence of the Lambs as a thriller, you will find it fits perfectly in with the horror genre. No doubt the picture stands alongside the all-time greats not just of the genre but in the art of film in general.

2 thoughts on “Retro Review: ‘Silence of the Lambs’”