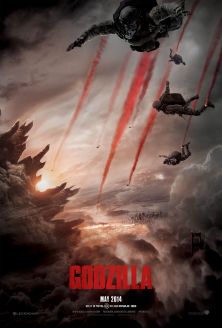 Plot: The chronicle of one family’s struggles as monster magnets.

Anyone who has seen Gareth Edwards’ 2010 indie darling, Monsters, understands why Edwards might be chosen to bring the King of Monsters back to the big screen. Monsters is a fascinating movie about two people travelling through a quarantine zone full of giant alien beings that crash landed on Earth. It has many of the ingredients of great sci-fi with a human backbone to keep it sturdy. Those who have seen it might also be wary of his choosing. The giant monsters remain mostly unseen except a cheap but effective special effects shot that bookends the picture, while the human character eat up most of the screen-time. These people definitely those who thought he could handle the human elements but not the Hollywood spectacle. Oh, how wrong they were!

The spectacle was the strongest element of the whole movie. Godzilla rose out of the ocean as if he never left. Gone are the days of men in rubber suits replaced by CGI artistry that is miles better than Roland Emmerich’s failed attempt at rebooting the project for American audiences. Creating the monster is only half the battle though. Edwards cleverly positioned the camera in such a way that we never get a clear shot of the monsters. We see them from the same angles (blind spots and all) that the people in the movie see them. He must have known that cries from fans were in his future. “We want to see more of the monsters!” must have already been ringing in his head, but he takes the chance and it pays off. It was like a found footage movie without any of the cliches. It felt like one of those movie theme park attractions that tries to place you right in the middle of the action never more so than the demolishing of the Golden Gate bridge or a HALO jump into a smoky, monster-stomped San Francisco. They are some of the most gorgeously conceived shots of the whole movie, and the rest of the summer will struggle to out do them.

It would be much easier to forgive the lack of direct monster action if the human elements were much stronger. Along with anyone who has seen “Breaking Bad,” I very quickly became a fan of Bryan Cranston realizing he was more than just the goofy dad from “Malcolm in the Middle.” Unfortunately, he doesn’t bring any of that same scary unsteadiness to this role as grieving husband and absent father. He is a little too off-kilter chewing too much of the scenery. He is balanced out by a barely there Aaron Taylor-Johnson (playing Cranston’s son) who’s attempt for quiet meditation comes off as sleepy. That leaves Elizabeth Olsen (as Taylor-Johnson’s wife) to shoulder the dramatic responsibility. She does a noble job, but she never effectively enters the plot. She is only ever on the fringes never getting enough screen time to matter. Meanwhile, the rest of the cast from Watanabe’s researcher to David Strathairn’s military leader simply phone it in. They are competent as supporting players, but the leads throw them under the bus by being so lackluster. 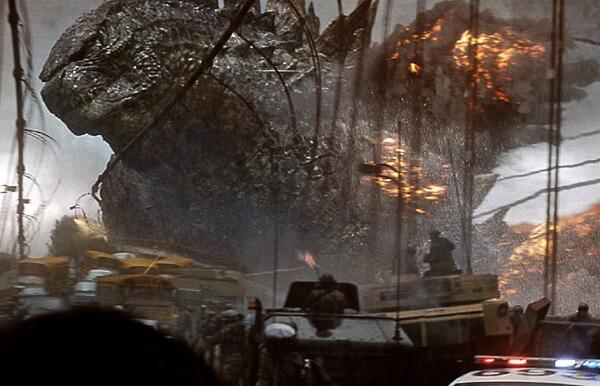 Edwards also throws the classic fear factor of the franchise out the window. He reversed what came first: Godzilla or the fear of nuclear armaments. Instead of being a product of such weapons, Godzilla becomes the target of them. He is a prehistoric beast from when the Earth was much more naturally radioactive, a true force of nature rather than birthed from human folly. It is a change to the mythos I am willing to go along with. It is the perfect way to subvert our expectations. Confusingly, Edwards also skips easy parallels to the Fukushima incident (which technically gets a visual cue) or something like climate change leaning more heavily on agenda-less post-9/11 city destruction “porn.” I know I should probably look down on such things, but there is something both exhilarating and terrifying about seeing such a familiar landscape becoming a battleground to superheroes and monsters.

Godzilla is not the King of Monsters grand return to the cinema that everyone was hoping for, but the spectacle is truly outstanding and worth seeing on the big screen. To say the least, it could have been worse (coughGodzilla 1998cough), but that’s not really a fair assessment of anything. It’s probably fairer to say that this is a lateral move for the franchise.