During this past weekend’s Supanova Convention in Perth, Australia we were lucky enough to sit down with Jamie Bamber, best known to the geek community as Lee ‘Apollo’ Adama in the reimagined Battlestar Galactica. Among his other projects is a long run on Law and Order: UK, firefighter drama The Smoke and upcoming Australian film John Doe: Vigilante.

Of course, with G-Funk being the geek he is, most of the conversation of BSG centred. Audio below the image, and transcript follow! 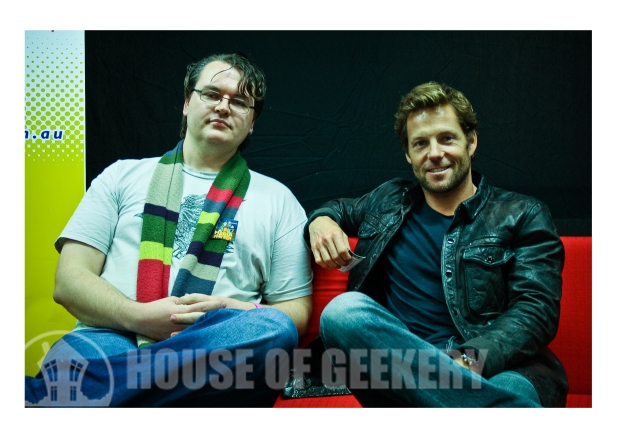 G-Funk: We are here with Jamie Bamber, best known for Battlestar Galactica and Law and Order, we are at Supanova 2014 in Perth, Western Australia. I’ve had a look at your filmography and we’ve got a lot of very down-to-Earth characters in medical dramas and police dramas and then we have Battlestar Galactica. Was that a total change of pace?

Jamie Bamber: I don’t know…I felt the whole ethos of Battlestar was to bring science-fiction down to Earth. You used the phrase ‘down-to-Earth’…when I first read the script (series creator) Ron Moore had written a two-and-a-half page mission statement and it was about taking the opera out of sci-fi and turning it into a more documentary feel. Everything should feel intimate and immediate. But of course it is a change of pace, it’s the first time I’d been into space, and the first time I’d flown a spacecraft and encountered a Cylon so there were a lot of different elements to the show.

Some days I’d be sitting in the cockpit of a Viper and pretending to have these epic dogfights in space…that was something I’d never done before…but there were always similarities with shows like Horatio Hornblower. It’s similar in many ways to Battlestar except on a naval vessel out in sea/space without a context, without land so the drama is quite contained so there’s lots of similarities with other things I’ve done.

G: you say that BSG was in space but without the space opera did it feel like…what I’m trying to ask is on set, do you have the Cylons there or do you have to use your imagination?

JB: The most significant Cylons in our job were human being looking like…things…like…sorry, my English just evaporated.

G: So did mine on the last question.

JB: They were humanoid so most of the time you’re talking them as actors. When we had the old ‘toasters’ or whatever they’re called there would be largely cardboard props that were there for line of sight so you were looking in the right place and they’d be digitally inserted after in the post-production process. They were there and not there at the same time. We didn’t interact with them much, the show really was a human show about human issues, social issues, political conflicts, war, survival – very immediate stuff so there wasn’t a lot of green screen. The most instances where that happened was in the Vipers to do these 360 degrees space fights, that was where the imagination was required. 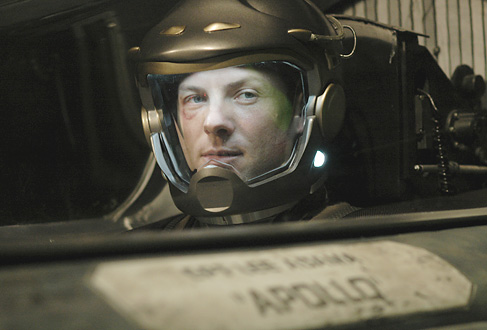 On board the Viper in ‘Battlestar Galactica’

G: Speaking of imagination and Battlestar Galactica we hear a lot of different interpretations of how it finished. How do you feel about the ending?

JB: I absolutely love the ending. I think it’s sublime. When I read it I was just delighted, it seemed to be totally perfect. It was a meditation on the journey these people had been on. They were finding home or creating a new home and there was a circularity to it that I found very satisfying and I thought it was beautiful!

G: We also have a lot of people debating the new series versus the old series, we’ve had somebody in this room telling us that they prefer the old series. Have you seen the old one?

JB: I saw it as a kid, yeah. I loved it as a seven year old, watching it in the early 80s. It was part of my childhood. It’s almost unfair to compare them because 1970s television was doing a completely different to what we’re doing now. For us to make a show that was like that would not have worked today. The only reason to revisit material is to find something new in it and I think we did. But we were very true to the premise: it was about humanity being attacked and trying to find a new home and we were reacting with Ron’s writing and Ron’s stories to a post-9/11 America and Iraq invasions. Our show was about the world in 2003 and obviously the original show was made in a complete different climate and trying to do a different thing in a more innocent era in television and arguably the United States, which was the parameter for which we viewed humanity.

G: That’s a really good read on the show. You were acting alongside Edward James Olmos (who played Apollo’s on-screen father), was he as intimidating in real life?

JB: Yeah, he was at the very beginning because I didn’t know him very well. He used that to make us all step up to the mark and, with quite a young cast, I think he wanted us to take the show very seriously and the story very seriously. I think he used it bit of that but I know him very, very well now and I’m not intimidated by Eddie at all any more. I still respect and admire him hugely but he’s a very warm, giving, very, very loyal friend. Intimidating is not a word I would choice to use about our relationship. He does exact high standards when you work with him and that’s what makes him a good person to work with. 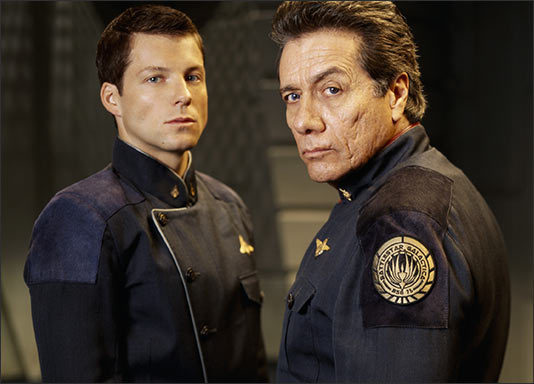 G: That’s what comes across in your on-screen dynamic, which was a really key part of both of your characters.

JB: Yeah, yeah. At the beginning we didn’t know each other well and he was quite tough, distant kind of task master. In those scenes where we were estranged as father and son there was something there and it was very visceral. I’m sure Eddie did most of that on purpose and then gradually he opened up and we became very close and the relationship follows as actors as to characters.

G: I don’t think I could ever imagine calling him ‘Eddie’. That seems surreal. What about the transition from that to Law and Order? What was the change in character like?

JB: It was exciting because going from a big American production…taking a big American production that everyone was familiar with back home to my home town and making a show for British television based on an American product which had never been done before. That was a first and that’s what really attracted me to the product. And then it’s a completely different type of television. It’s episodic, it’s not serialised at all and that was a blessing and a curse. It’s hard to follow something that requires all of your passion and concentration and work ethic like Battlestar and then going into Law and Order where every episode, roughly, the shape of it is the same. That’s a transition I struggled with but enjoyed as well. It’s a completely different thing. I’m very proud of Law and Order, and it’s appreciated all over the world and it’s still going strong. It was also lovely to be working on my home town streets and reconnect with places and people I hadn’t seen for a while. Battlestar was huge at the time when we went back to the UK because the finale was airing and all that. The Guardian newspapers had it as one of the top…whatever it was…TV shows of all time and it was lovely to be appreciated like that and to be home for it. 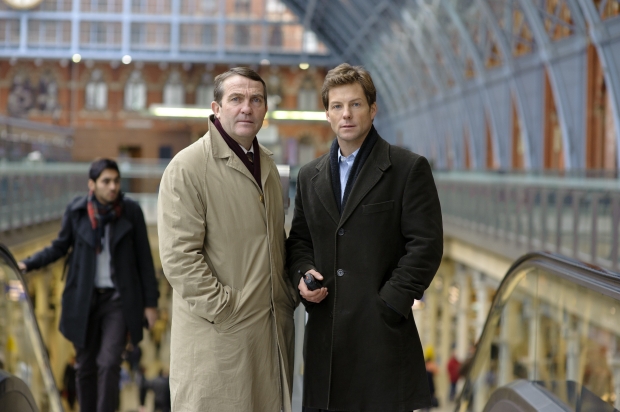 G: Looking to the future, what’s coming up next?

JB: No, I’m not taking it easy! This is the hard time. The hard is when you’re between projects and wondering what to do next, and what the right choices are…and when the choices don’t necessarily want you trying to convince them that they do…that’s what I’m doing at the moment. I’ve been busy but right now I’m looking forward to the unknown and hopefully the surprising journeys of potential projects to come. I did a series in London last year called The Smoke, that will hopefully make it here to Australia quite soon, I did a film called John Doe: Vigilante that will be coming out here in October, which I shot in Melbourne, an Australian film, and I did a romantic comedy called The Better Half in the States that will come out in the future some time but right now? Me? Nothing.

G: That’s not the worst thing in world, is it?

G: Ok, I’m getting the signal, thanks for talking to us!

JB: Thank you, nice talking to you.

Check out the trailer for John Doe: Vigilante below, we have heard good things!