The Geekery Guide: Who is the Doctor?

In our series that brings you up to speed with a range of interesting geeky icons we’ve looked at Cthulhu and Ultron. Today we turn our attention to one of the longest running sci-fi stories of all time. The unlikely British hero: The Doctor.

The one on the right.

In a Sentence: The Doctor is the alias of a humanoid alien who travels through space and time in a ship resembling an English Police Box, usually with some human companions for company.

Back in the 1960s the brash, outspoken Canadian Head of Programming for BBC1 Sydney Newman wanted to put together a show that would appeal to children while providing some educational value. The time travel motif was introduced early to provide a basis for characters to visit historical events and science concepts, with the first story involving the titular time traveller taking his teenage grand-daughter and two of her teachers on a trip to pre-historic civilisation.

Newman’s team for the show was lead by some genuine outsiders. Verity Lambert was given her first role as a producer, becoming the first woman to fill such a role for the BBC. Along with Lambert was the show’s initial director Waris Hussein from India, also struggling to fit in the white male workers of the BBC. In spite of the obstacles they faced they got the first episode – An Unearthly Child – in the can, but Newman was not happy with the product. He found the character of the Doctor (at the time played by William Hartnell) to intimidating and unfriendly for the intended young audience. He did allow the production team to reshoot the episode, finally completing the first serial and airing it 23rd November 1963. 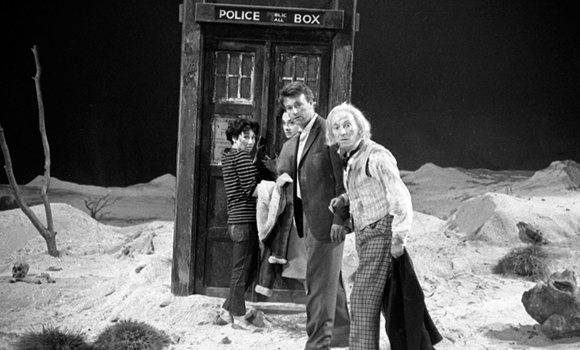 Every cent of the budget is on show!

Bad timing attempted to intervene once again, as the assassination of US President John F. Kennedy the previous day dominated the airwaves and the ratings for Doctor Who was low. High production costs along with the low viewer numbers led to the show being cancelled, with it expected to come of the air after the broadcast of it’s second serial. At this point the show was destined to fade into obscurity, but the second serial introduced the ‘Daleks’. With Newman wanting to avoid ‘bug-eyed monsters’ on the show the Daleks were given a science based backstory involving radiation poisoning. These new villains were an instant hit with the audience and the show was given a third unlikely chance.

Lead actor William Hartnell continued in the role of The Doctor from 1963 up until 1966, when his arteriosclerosis interfered with his ability to learn his lines. It was initially expected that the show would wrap, but the concept of ‘regeneration’ was introduced. When the Doctor was close to death (in this case due to a run in with the new threat of ‘Cybermen’) he would regenerate his body and change his appearance. Patrick Troughton took up the mantle in a narrative device that would allow for the show to continue on and off for more than 50 years.

The Doctor (real name unknown) himself is an alien, later revealed to be from the planet of Gallifrey, home of the Time Lords. At some point in his past her had a family and children, but who they were and what happened to them has never been revealed. We do know that he became dissatisfied with the Time Lords policy of observation of the time stream when they have the ability to experience any point in the history of the universe for themselves. Along with his gran-daughter Susan he stole a TARDIS (Time And Relative Dimension In Space) ship and went on the run, being officially declared a fugitive. He hid himself in London, Earth, during the 1960s when the TARDIS chameleon circuit disguised the craft as a blue Police Box (a common sight at the time). When the chameleon circuit malfunctioned the craft became stuck in this guise, although the Doctor has made little effort to correct it.

Initially travelling with his grand-daughter and two of her Earth teachers, Ian and Barbara, the Doctor has seen many different faces join him on his journey. Susan stayed behind on future Earth following liberating the planet from Dalek rule after falling in love with a member of the rebellion, and this started a revolving door of up to 48 different companions over the years. This has included other Time Lords, robot dogs, displaced galactic rulers and a surprising number of attractive young women.

Not an K9 was unattractive.

With every ‘regeneration’ the Doctor changes not only his physical appearance but some aspects of his personality. This has seen the dandy Jon Pertwee replaced with the unpredictable and eccentric Tom Baker, then by the sportier Peter Davidson. The youngest actor to the role, the quirky Matt Smith, was recently replaced the much older, crankier Peter Capaldi.

Why is It So Popular?

The popularity of the show Doctor Who  has wavered over the years. With the alternating cast we have seen 13 actors officially portray the Doctor for different periods of time, with some reprising the role for cross-overs, such as The Five Doctors. Although it had a rocky inception the popularity of the show grew quickly and continued as a regular feature of British television until 1989, where it was cancelled. An attempted resurrection occurred in 1996 with a feature length film geared towards American audiences but this was largely considered to be a very poor version of the franchise (although Paul McGann was widely considered to be an excellent choice for the role of the Doctor). The Doctor would continue in the form of novelised stories, radio plays and comic books until a much more successful return with Christopher Eccleston and Billie Piper in 2005. The show has continued to air since then.

Having become a stable of pop culture and sustained an extra-ordinary long life on television, it’s worth looking at why the show is so popular. With the replacement of the main actors every couple of years the producers have the unusual ability to continuously update the show for the next generation of viewers with very little impact on the tone and narrative of the show. The richly drawn mythos that has been created over the years has been a gold mine for geeks everywhere, leading to many debates about who the best Doctor is, who the best companion is and hypothetical situations for the characters to find themselves in.

But if you were to boil it all down to one word that would be ‘adventure’. Doctor Who was a remains the quintessential adventure show, which can take it’s characters to any point or event in the realm science-fiction or history. This provides a massive scope for creativity. In the first 1963 season alone saw the Doctor encounter cave-men, Marco Polo, the Aztecs and the French Revolution whilst also fighting radiation mutants outwitting alien faces and get deal with cabin fever induced paranoia after their ship breaks down. After 50 years on the air there is still plenty of options open to the Doctor and his companions, with the most recent episodes taking on Robin Hood, a Cold War submarine and a sci-fi reworking of ‘Murder of the Orient Express’. There is literally no limit to where the show can take us.

Then there’s the characters. The Doctor represents many things. He’s a noble, do-gooding pacifist who outsmarts his enemies rather than fights them, but he his driven by his curiosity, sense of adventure and the belief that everyone has good in the them. Although sometimes dark and grumpy he’s a great template character for this set up. Many of his companions have contributed to the success of the show, with Sarah-Jane Smith becoming a fore-bearer of feminism in genre television, Rose Tyler becoming the emotional heart of the show and the Doctor’s wife Professor River Song adding a healthy dose of sass (and hair). 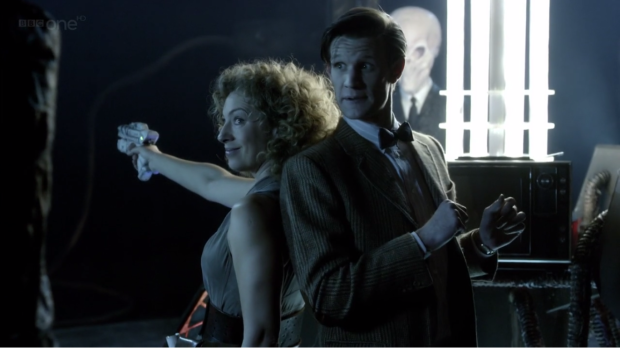 Don’t argue with that hair.

As with any sci-fi franchise there is a sub-group of nerdy types who’ll be all over it. With a long established mythology to delve into discuss and (of course) write fan fiction for. Being a largely family friendly show the core audience also included the younger demographic, creating a large number of people who grew up with the show. With the newer, younger takes of the character and a leaning towards the oddball the new version of the show has been embraced by the denizens of the internet who inhabit such corners as tumblr.

Doctor Who doesn’t get spoken about in the same halls as Star Trek or Battlestar Galactica, not being considered to be a ‘pure’ sci-fi. That said it has carved out a niche for itself, and you don’t stay on TV for more than 50 years without being remembered. Some of the Doctor’s have become more recognisable than others, namely Tom Baker and David Tennent, with their trademark costumes and accessories (epically long scarves, 3D glasses, pinstripe suits) are instantly recognisable. The blue box is better known for it’s role in Doctor Who than it was a part of the British landscape, the police box having been phased out decades ago. Daleks, Cybermen and now the Weeping Angels have turned up everywhere…Daleks in particular have met Bug Bunny, the Rugrats and many others. 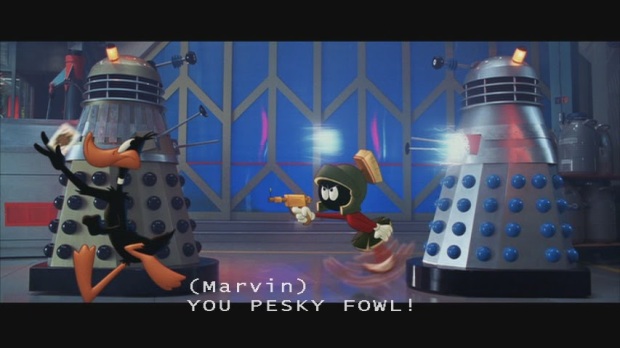 This guest appearance almost cost the BBC the rights to use the Daleks in the show. True story.

In addition to usual spin-off books, comics, video games and whatnot, the music of Doctor Who is regularly performed live as parts of orchestral spectaculars. Characters from the show have a long running habit of featuring in charity specials, along with comedians like Rowan Atkinson taking on the role with a humorous slant. During the early years of the show a couple of non-canon movies were produced with Peter Cushing in the main role, and an animated series with Richard E. Grant was released in the 1990s. There’s even a TV movie just about the making of the show, An Adventure in Space and Time. Doctor Who themed conventions occur worldwide throughout the year. This isn’t even looking at the merchandising, a huge money maker for the BBC. Clothing, scarves, action figures, build-able sets, costumes, kitchenware, linen, replica props…there is an endless amount of merchandise on the market and it’s always a big seller. 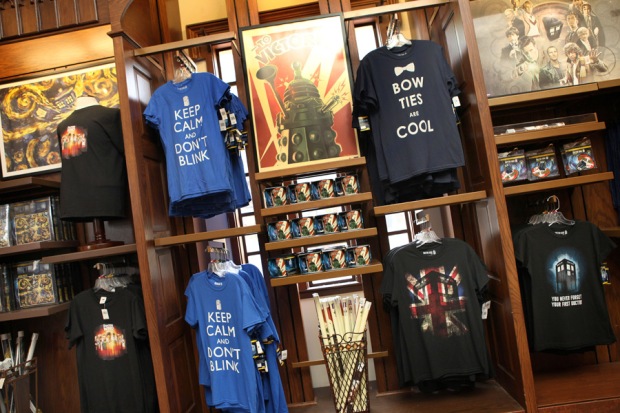 In the present day the franchise is a juggernaut and not likely to stop.

How to Piss of the Fans: Call the TARDIS a phone box and talk about the Doctor like ‘Doctor Who’ is his name. Example: “What’s Doctor Who up to in his phone box this week?”

Is it Worth Checking Out: About three years ago I checked out the show to see what the deal was. Now I have every episode from the past 5o years on DVD, a stupid amount of merchandise, a Tom Baker scarf I wear to work and a VIP ticket to the next convention. Yeah, I’d say it’s worth checking out.

9 thoughts on “The Geekery Guide: Who is the Doctor?”