Film has to have a purpose. A full length feature film is a very expensive project. Even those low budget indie films require big chunks of cash and crowds of people to accomplish. During my less cynical moments I’d like to think people invest time, money and their artistic selves into a film for more than the bottom line of a business. They want to tell a story, they have an artistic vision, they want to challenge people, they want to inspire people…something other than turning a profit.

If you take out money as motivation then the new Disney version of Cinderella is entirely pointless. I’m pretty sure the pitch to the studio was a blank page sprinkled with glitter.

Important note here: I am clearly not the intended audience for this movie. I’m the wrong age, I’m the wrong interest group and I am equipped with the entirely wrong junk. But I try to walk into every movie with an open mind, hoping that it will be enjoyable on some level. So I turned on Cinderella having seen it’s good reviews and hoped to be entertained. I wasn’t. Because this is a shallow and pointless endeavour.

Why was this movie made? There’s no reason for it to exist. Disney has a Cinderella film. It came out with 1950 and has since been considered a classic, with Blu-Ray releases and merchandise featuring the protagonist still bringing in money. Cinderella is a central figure in Disney’s lucrative ‘Disney Princess’ brand, which make BILLIONS. They don’t even need the money from this new version. Cindy is making money 65 years after her heyday.

Ok, maybe there’s a director with a bold new vision for the story, a fresh perspective or a modern take on the well known story. A way to see it anew. They did that with Maleficent and Alice in Wonderland. The former was mediocre and the latter downright shit, but they at least tried and there’s merit in that. What does the new Cinderella bring to the table? Sweet fuck all. It’s the same story told in the same fashion. Same design choices, same plot points, same tone, same style…even some of the shots are the same. This is little more than a re-enactment of the old film.

Right, fine, there are some vestigial alterations that are worked in carefully enough that they won’t disrupt the basics. Like the development of the Prince from the most bland and uninteresting Disney character into the second most bland and uninteresting Disney character. What they did is this: when the king insists that he must marry a princess, Prince ‘Kit’ declares that it’s an old way of thinking, and why shouldn’t he marry for love? So to make the character interesting they gave him the most boring character trait in history. Yes, like Princess Jasmine, Elizabeth Swan, Mulan, the new version of Alice and many others Disney has made a character weirdly modern thinking in a period piece in lieu of a personality. Unroll the bunting for this monumental achievement in writing.

Also the stepmother is given a bit more backstory, delivered in a single monologue that impacts the story and characters not one iota.

I was sad for a little while. That’s about it.

Seeing an animated film jump into the real world is always an awkward moment, but as with many films the strength lays in the design. That’s a moot point here though because all they’ve done is try to stick to the original as much as possible, sometimes to the detriment to the overall picture. The scene where the fairy godmother prepares for the ball is packed full of terrible CGI, so over used and with such little artistic consideration that it’s akin to being hit in the face with a balloon full of glitter. It’s bright and sparkly but it’s mostly annoying and serves no artistic merit other than recreating the 1950 visuals in a less interesting medium.

On the whole the directing is very weak. They’ve opted to add a voice over narration to explain things to us. This is generally seen as a cheap shortcut to be used in the place of actual visual storytelling – the very thing cinema exists for. Let’s look at the original. Remember the scene where the stepsisters are piling stuff onto Cinderella and she’s standing with a dreamy look on her face? It tells us that she’s escaping in to her imagination to escape the harsh reality she finds herself in. The new version has the narrator explain this to us while Cinderella rides a horse past some pretty scenery. The cartoon had better performers and this is beneath Branagh. 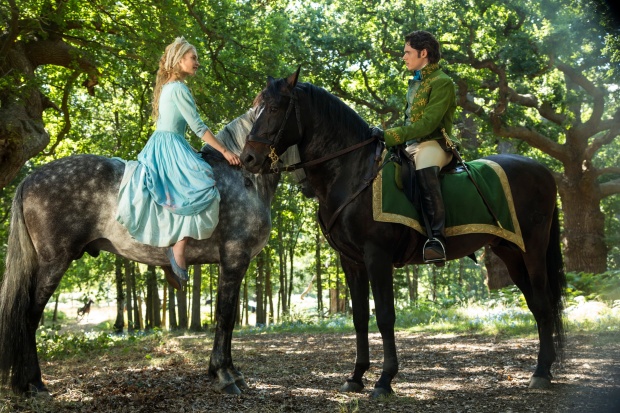 The horses are there to prop up the mannequins dressed as the actors.

The movie is packed to the brim with downright confusing decisions from the film-makers. Look at the casting for the Ugly Stepsister characters. I think they missed something in the brief, because they’re not even TV ugly. It seems that we’re not supposed to like them because they’re not good at stuff and are shallow – which is ironic because that sentence sums up the movie.

What a pair of warthogs.

But the most confusing and egregious moment comes during the CGI heavy ‘magical’ scene. Cinderella wears the pink dress from the animated series to prepare for the ball but rather than being made by rodents it used to belong to her mother. The connection to her late mother is something they successfully build on in the first act, and this link to her was a big deal. When Cinderella asks the Fairy Godmother to repair it, she offers to create a new one. Cinderella turns the offer down because it was her mother’s dress and wearing it will make it feel like her mother was with her at the ball.

It’s a touching moment. No sarcasm.

But then the Fairy Godmother asks if her mother wouldn’t mind her ‘geeing it up a bit’. A spell is cast and through more awful CGI the dress is turned into the giant, lavish, bright blue dress that adorns the poster. Cinderella is delighted. Wait, what?! She JUST said she wanted THAT dress because it is a link to her lost mother…and now she’s thrilled that she has a bigger, more glittery, expensive looking dress?! What just happened?

This is reflective of the movie as a whole. It doesn’t matter if it makes sense, it doesn’t matter if it’s good…so long as it looks like the one people remember from childhood and is sparkly. I know I’m going to get hated on for this article because the movie has an 83% approval rating on RottenTomatoes and has pulled in $35million in the first week. This is in spite of it having bland directing, flat, dull characters, a reliance on stunt casting and editing more concerned with jamming in as many pretty backgrounds as possible than developing a decent flow. 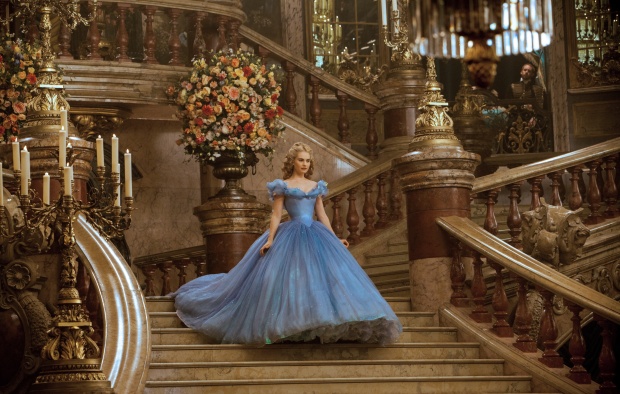 Walking down the steps takes 10 minutes and is shot from 50 angles. It was a dull party.

In summary this is an effort by the studio to cash in on nostalgia. Everything in this movie banks on the audience being familiar with the Disney animated original, and will only appeal to people who are happy paying for something they’ve already got.

For a movie that goes on about ‘believing in magic’ and wish fulfilment, this is a pretty cold and cynical cash grab. 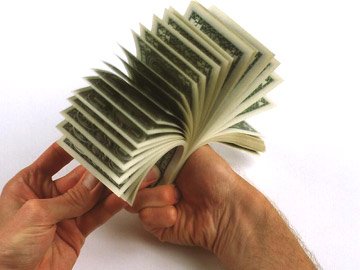 9 thoughts on “The Live Action ‘Cinderella’ Is Monumentally Pointless”