Plot: Even though the original Jurassic Park ended in tragedy before it opened the doors, a fully functioning dinosaur park has been up and running for about 20 years. With public interest on the wane the geneticists splice together a new hybrid dinosaur to create public interests. Of course it escapes.

Review: First things first – nostalgia plays a massive role in this release. It’s coming out at just the right time. The original still holds a place in our hearts and we’ve started to forget about the sequels. The marketing department is more than aware of this, making excellent use of the movie’s score and familiar imagery in the trailers. The movie itself goes all out, with flares, ‘retro’ logos, the old cars, a statue of John Hammond and even Mr. DNA popping up. This isn’t bad per se, because the director also invokes the tone and atmosphere of the original movie. That’s the type of nostalgia bait we can live with. 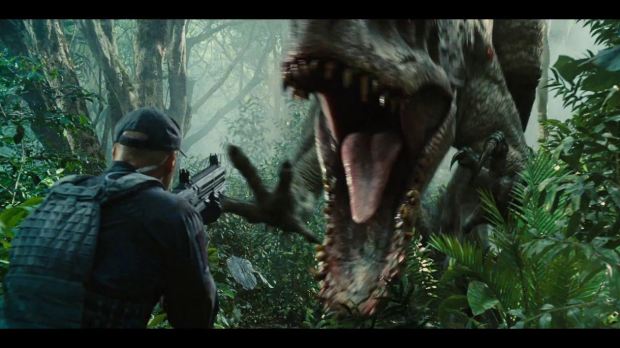 If there’s anything that causes this movie problems it’s the characters. They are SO DUMB. Amazingly dumb. Don’t get into the habit of face palming every time they do something dumb – especially in relation to the Big Bad newbie – because you’re going to get a serious headache. The labs have whipped up this new super-dino Rex thing for the advertisers and shareholders and then proceed to make every boneheaded decision they can think of. The only person they’ve got pulling security detail on this beast is one fat security guard who sits with his back to the monitors and windows of the enclosure eating a sandwich while his boss is inspecting the pen.

And then they can’t find it on the monitors. Do they make use of the multi-million dollar tracking software they’ve got handy and put a trace on the tracking chip? No, they go into the pen to try and find it. It’s then that they discover the damn thing can control it’s heat signature and hide from the thermal imaging…something that is later explained by the scientists to be a deliberate and known part of its design. You couldn’t have told someone about this ahead of time? Perhaps before it starts eating people? This happens again and again and again. The scientists only tell people about the dinosaurs features after she’s used to kill folk.

The entire script smacks of being a first draft (except we know it went through many, many rewrites before finally happening). Some of the pacing is way off, and the crowds of people supposedly being at risk might as well go home halfway through for all they factor into the story. Then there’s little things, like Chris Pratt chastising Bryce Dallas Howard about raising this dinosaur in isolation whilst his pet raptors were raised with siblings – and she doesn’t point out something that she’s already talked about, this new creature having eaten her sibling. Was she so in thrall of Pratt’s ruggedness that she forgot? 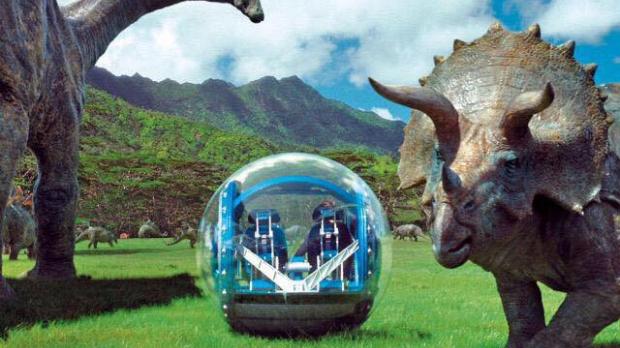 Speaking of the characters – we’ve established that they’re dumb but they’re not especially well written either. What we’re told about them doesn’t always mesh with what we see. Pratt makes a crack about Howard bringing an itinerary on a night out because she’s so super organised, but we keep seeing her flustered and making a mess of things and having little control of what’s going on. She retorts with him wearing board shorts to a restaurant to show how laid back he his, but he’s got a constant stick up his butt about treating dinosaurs nicely. All the actors do fine with the material, but it’s shoddy material. As much as we all like Pratt, I don’t feel like he was the best fit for this character. Perhaps someone who was a bit more grizzled would be better, because he feels like he’s wearing a costume rather than a character wearing his clothes.

This sounds like a quite a few problems stacking up against this fourth dino adventure, but the overall final impression was good. The design is fantastic – what we saw of the operational park in the first trailer is something we didn’t know we really, really wanted. Most of the imagination on show is in the up and running park, complete with visitors. The scenes when the dinosaurs are interacting with the people are often really good. The impact of CGI dinosaurs has diminished a bit over the decades but that gets compensated with the imaginative ways the public interact with the exhibits. More than anything else we want to visit this place. 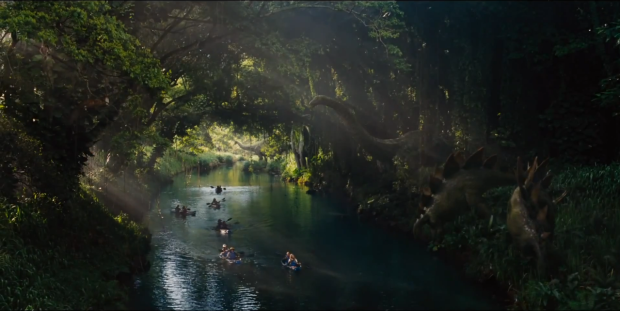 And the finale. Most of the dinosaur attacks deliver, but that final showdown nails it. The movie gets an extra point just for that. Perfect. If you’ve still got a lot of love for the original this is a fun night out.