With Marvel having the rights back to its most popular character, they are wasting little time getting him back into the cinemas, for better or worse. Anyway, I really hope they go with a villain that has not been used yet.

Mysterio has a lot of fans, but I never really got the point. His popularity is hard to ignore though. His real name is Quentin Beck, and he was an aspiring special effects artist. His film career didn’t really take off though, so he uses his mastery of illusions to become a criminal. Fans seem to think a film version of Mysterio could be no-holds barred film technique.

Black Cat is to Spider-Man what Catwoman is to Batman. She is a cat burglar, a femme fatale, a love interest, and is as often an ally as she is a villain. That certainly complicates matter, and hopefully it does so in such a way that Marvel Studios isn’t criticized once again for having a weak villain. She is also a legacy character. Her father was a cat burglar as well, codenamed “The Cat.” Maybe, like Ant-Man, it could help tell some of the stories that happened between Captain America being frozen and the origins of Iron Man and The Hulk.

Casting suggestion: Black Cat would have to be a peer of Tom Holland. Chloe Grace Moretz is 8 months younger than him.

There have been a few Beetles, but the first version was Abe Jenkins. He was a lowly mechanic who dreamed of fame and fortune. He tried to create an Iron Man like suit and settled for infamy. I sort of like the idea of Jenkins hoping to face off against Iron Man and ending up with a teenager in long pajamas. What is even better is the promise of a possible Thunderbolts movie, since Beetle would eventually join them as pretend-hero (and then later real hero) Mach V.

Casting suggestion: When I did a casting call for the Masters of Evil, I chose Burn Notice‘s Jeffrey Donovan 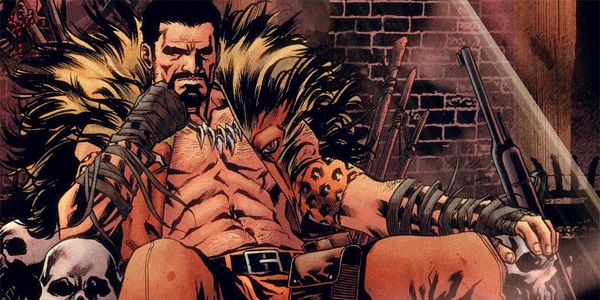 Kraven the Hunter was a famed big game hunter who later became a mercenary. He became obsessed with the idea of taking down Spider-Man as game even more dangerous than a regular man. He is my favorite Spider-Man rogue of all. I would have put him at the number one spot, but I was hoping for a more seasoned Spider-Man so that they could adapt “Kraven’s Last Hunt.” I suppose they could still start with a basic Spidey vs Kraven story, and then do the “Last Hunt” down the road. Actually, that might work out for the best.

Casting suggestion: Joel Edgerton, provided he can do an accent.

Scorpion, aka Mac Gargan, might seem like a weak choice because he is sort of like an evil version of Spider-Man, but I think that is what makes him a good choice to help re-introduce Spider-Man, leaving more screentime to develop the hero. I don’t recall him having a previous relationship with Peter Parker either. A previous and/or dual relationship with Peter Parker is usually the makings of a good rogue. In the comics, Gargan was originally a private investigator, useful with a camera, maybe he is updated to a paparazzo. Maybe he can mentor Parker as a freelance photog and become obsessed with revealing Spidey’s identity.

← Why Does Everyone Hate ‘Fantastic Four’?
The Significance of Black Panther In The MCU & Beyond →