Terry Pratchett Just Trolled Us From Beyond the Grave

We’ve talked about Sir Terry Pratchett here from time to time, such as this guide to the Discworld series, his 10 best characters and, sadly, a tribute following his departure from the mortal plane. This week we, like many fans, have been enjoying his final novel and entry into the Discworld series ‘The Shepherd’s Crown’. It’s been well received by fans and critics, and is a bitter sweet end to one of the longest running series in pop culture.

If you haven’t read it yet, and you intend to, get on to it. And turn away now, it’s we’re getting into spoiler territory.

Although the character of Tiffany Aching was intended to follow a 4 story arc this marks her fifth outing as a protagonist. This feels right, as we’ve seen Mistress Aching has growing up in this world, offering a unique perspective on established characters and lore, and getting a strong finale for the character is a great way to mark the end of this epic series. This feeling of finality is enhanced by Pratchett straight up killing a main character in the first act. 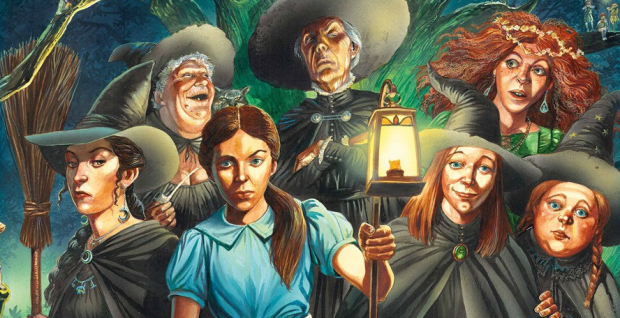 One thing that has made Pratchett’s books such a treasure is how well realised his characters are. Although they occupy the realm of fantasy they have such recognisable traits. Everyone knows a Nanny Ogg, and met a Munstrum Ridcully. We even sympathise with the existentialist crisis suffered by the Grim Reaper. So when one of them dies it carries a heavy meaning with it. Not that Pratchett has ever killed any of his leads, like Vimes or Rincewind. He always has a new path to take them down.

But…he killed Granny Weatherwax. THE character. The most realistic and awe-inspiring character in the series. We love seeing her get into impossible situations just to see her crush her opponents. And she died. Not in an epic struggle but in her sleep after getting her cottage tidied up. There is no way an author with this kind of following and with open communication with his fans could avoid a massive blowback for this kind of thing.

Sir Terry Pratchett knew he wasn’t long for the world. His progress with Alzheimer’s disease has been public, as his intention to use assisted suicide once he could no longer work. Although that is not how it panned out, it was known that this was likely to be his last book in the series. Could Pratchett have planned for this startling turn of events to land on the shelves when he wouldn’t face the repercussions from fans? He never skirted away from dark humour – Death is one of his main characters – and there’s something heart warming about the thought of Pratchett getting a laugh at our expense from beyond the grave. It’s seems…mirthful. A perfect send off.

Thankfully it doesn’t feel like a move done for shock value. It’s not even a Granny Weatherwax story, it’s a Tiffany Aching story and the death serves her story. Having established herself as the most powerful young witch in an age by defeating the Queen of the elves, melted the Wintersmith and generally been a badass the only way left forward would be through Granny. Having Tiffany trying to fill the boots of Granny is much more in line with the characters than some kind of confrontation between them. The event is dealt with in a sombre but realistic manner, showing the ripples is causes throughout the world.

This is a heartfelt and charming finale to a long and impressive career. Any fan of the stories to date will enjoy ‘The Shepherd’s Crown’. If you’re not familiar with the series this isn’t a good place to start – more than any other book it feels like it was written for the fans. But go ahead and check out the rest.