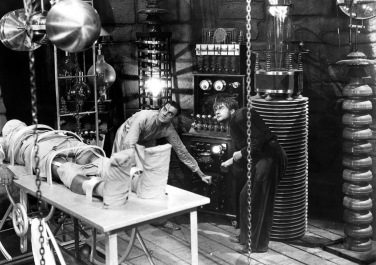 The Scene: Henry Frankenstein and his hunchback assistant Fritz (not Igor as popularly believed) finally decide that the dark and stormy night they are enduring in their mountain laboratory is the perfect night to bring life to creature they have been constructing out of the bodies of the dead. They are interrupted by Dr. Frankenstein’s friends who are rightly concerned about his mental health, instead the three of them find themselves as spectators to the grand and immoral science experiment about to unfold. Thunder crashes and rain pours while bolts of lightning bring life to Frankenstein’s monster famously played by the legendary Boris Karloff. As the creature’s fingers move ever so slightly, a hysterical Dr. Frankenstein cries out his famous lines “Look it’s moving. It’s alive…. It’s alive….IT’S ALIVE!”

The Deconstruction: With talkies still being a very recent technological advancement in Hollywood, studios were bringing in theatrical directors who had experience with dialogue to usher in this new era, one of the greatest filmmakers to come from this was the proper English gentleman James Whale. Whale brought his stage sensibilities to the world of film and created a series of films with a unique visual flair because of it, and this scene in his picture is a perfect showcase of that.  The three friends of the doctor watching this unfold are clearly stand-ins for we the audience, in fact the mad doctor even sets the stage for them by proclaiming “Quite a good scene isn’t it? One man crazy, and three very sane spectators.” In the original novel, author Mary Shelley never revealed the method by which Frankenstein created his monster, giving Whale creative freedom to create this scene as he saw fit. Taking influence from the great German Expressionists of early horror cinema, he created a vertical set filled with shadows and weird angular patterns almost as if it were taken from a stage production. In the lead role Whale, picked one of his favorite actors from the world of stage, Colin Clive who played the role of Dr. Frankenstein with a loud and grandiose way just as any good performer does on stage. To counterbalance Clive’s bombastic style is Boris Karloff in the part that made him a cinematic icon, delivering a subtle and understated performance.  In this scene Karloff simply moves his fingers ever so slightly in order to deliver his message.

Best Bit: Naturally Clive screaming at the top of his lungs one of the most famous lines in movies history. IT’S ALIVE!